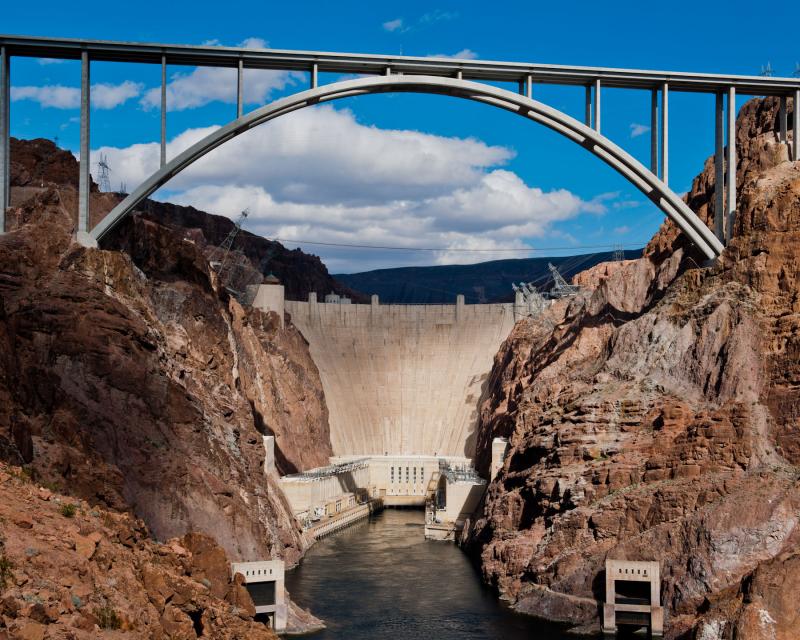 Hoover Dam, one of the tallest dams in the United States and a National Historic Landmark that draws tourists from across the globe, is a key reservoir providing flood control, water storage and irrigation along the lower Colorado River. It also is one of the nation’s largest hydroelectric facilities, generating on average about 4 billion kilowatt-hours of hydroelectric power each year, enough electricity to serve more than 1.3 million people in Nevada, Arizona and California.

Completed in 1936, Hoover Dam was built to provide irrigation water and hydroelectric power, and to control seasonal flooding of the Colorado River, which made downstream settlement possible.

The federal government authorized the construction of Hoover Dam, spanning the Nevada-Arizona border about 30 miles southeast of Las Vegas, as part of the 1928 Boulder Canyon Project Act. The dam was initially named Hoover Dam, in honor of then-President Herbert Hoover, who had led negotiations for the 1922 Colorado River Compact that apportioned the river’s waters between the Upper Basin and Lower Basin. Once President Franklin Roosevelt took office in 1933, his Interior secretary, Harold Ickes, changed the name to Boulder Dam. Congress changed it back to Hoover Dam in 1947.

Watch a video on the history of Hoover Dam.

Hoover Dam, a concrete-arch gravity dam, captures water from the Colorado River and fills Lake Mead. At capacity (1,221.4 feet above sea level), the lake is the nation’s largest reservoir, able to contain 28.9 million acre-feet of water covering about 248 square miles. The lake extends about 110 miles upstream from the dam.

In California—as a condition of Hoover Dam’s construction—the state has a limit of 4.4 million-acre-feet of annual use of the Colorado River in “normal” years plus one-half of all surplus water when it is available. [See also Colorado River 4.4 Agreement centering on California living within its means of Colorado River water.]

A two-decade drought has severely affected the Colorado River. Between 2000 and 2004, the Colorado River Basin saw the lowest 5-year average annual hydrology on record, reducing the combined storage in Lake Powell and Lake Mead from about 94 percent of capacity to about 52 percent of capacity. Between 2000 and 2020, there has been above average inflow only five times. 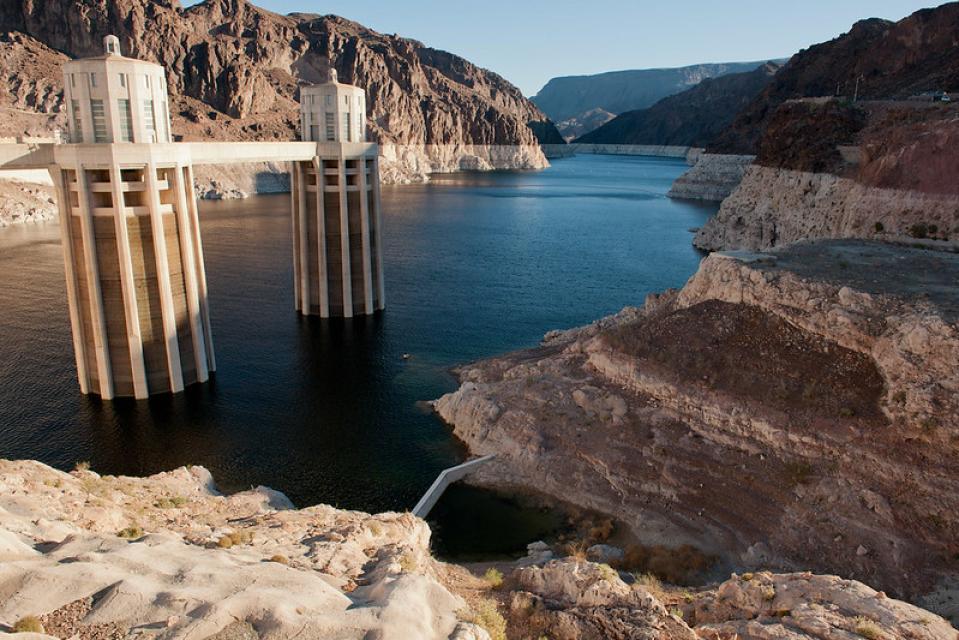 Lake Mead’s declining elevation is most noticeable by the giant bathtub ring at its outer edge. Mead’s surface elevation has flirted with 1,075 feet above sea level, the level at which the secretary of the Interior declares a water shortage for the states in the Colorado River’s Lower Basin — Arizona, Nevada and California. Four other states – Colorado, New Mexico, Utah and Wyoming – comprise the Upper Basin.

In 2019, representatives from the seven Colorado River Basin states and the federal government met at Hoover Dam to sign a historic agreement on how to deal with the ongoing drought in the West. The Drought Contingency Plans for the Upper and Lower Basins outline how water users will cooperatively take voluntary reductions in water to preserve Lake Mead’s elevation.

Despite those agreements, the water level in Lake Mead continued to drop. That triggered a first-ever shortage declaration by the Department of the Interior, requiring Arizona, Nevada and the country of Mexico to reduce their take of the river in 2022. In August 2022, as Lake Mead continued to drop, the Interior Department announced even deeper cuts for 2023 to Arizona, Nevada and Mexico. With the largest share of the river, California was not required to cut back, but could still face reductions if the water level in Lake Mead drops further.

Hoover Dam has also altered the ecosystem of the Colorado River Delta in Mexico, particularly causing a decline in fish populations downstream. Downstream water users and the federal government cooperatively work to address endangered species issues through the Lower Colorado River Multi-Species Conservation Program, a 50-year habitat conservation plan that works toward the recovery of species listed under the federal Endangered Species Act. 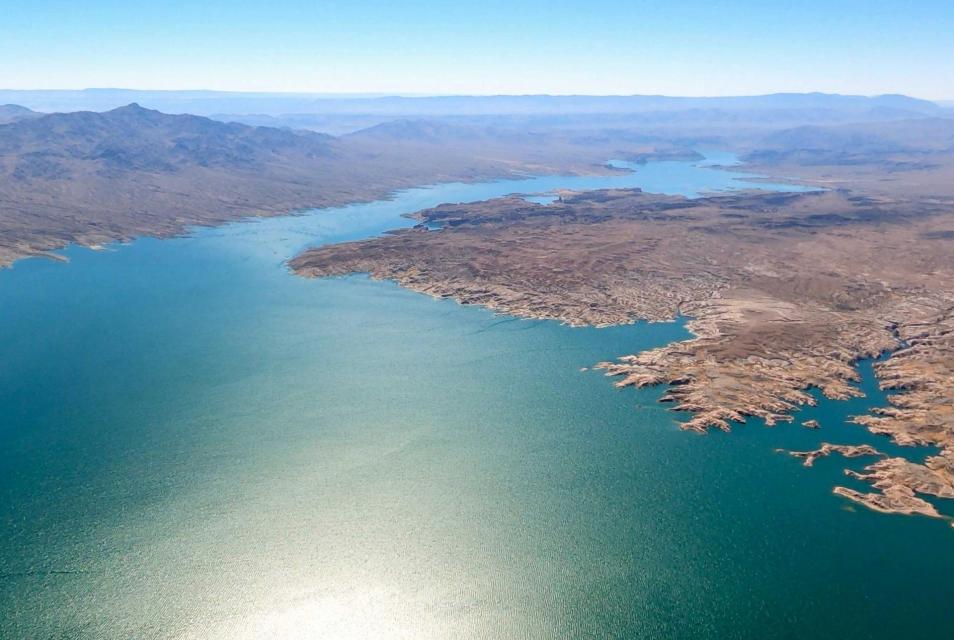 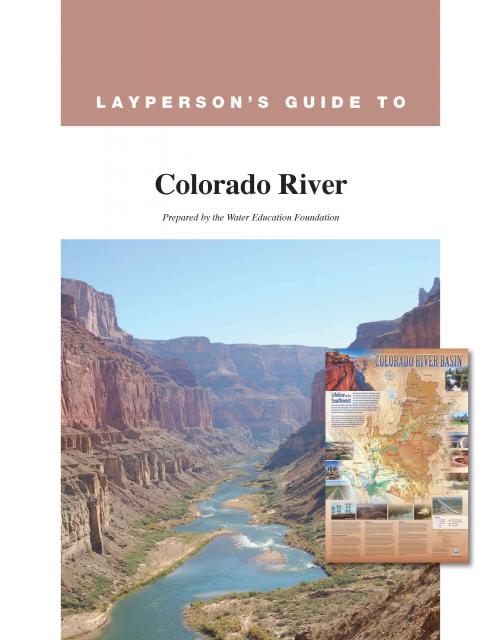