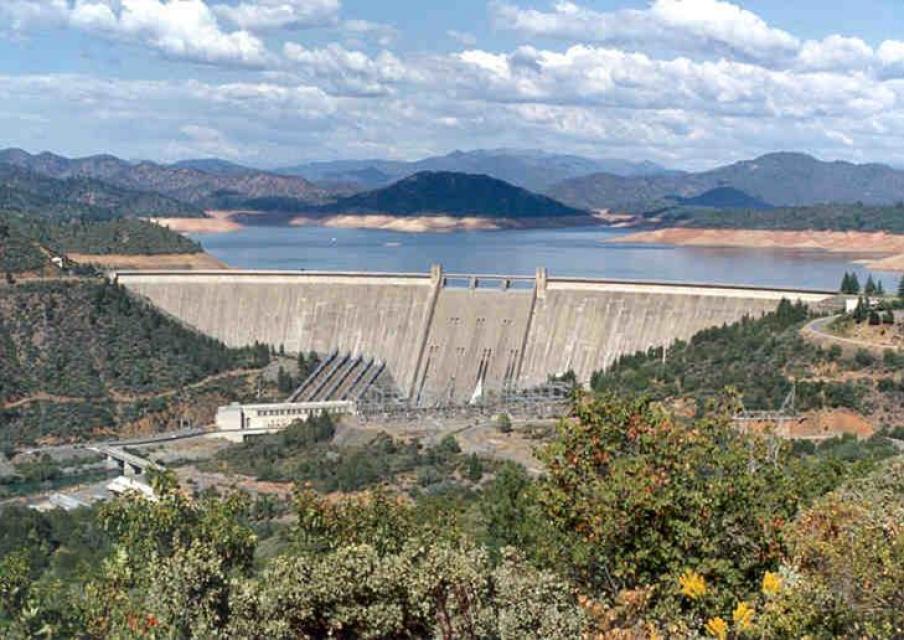 California has more than 1,400 named dams and 1,300 reservoirs that help with flood management, water storage and water transport. Hydropower from dams also provides a relatively pollution-free source of electricity. Dams are owned, maintained and operated by federal, state and local agencies.

The State Water Project’s most visible facility is the 444-mile-long California Aqueduct. The aqueduct, which parallels Interstate 5 through the San Joaquin Valley, transports water from Oroville Dam to Lake Perris in Southern California.

Constructed long ago by federal effort to help create farmland, the Central Valley Project is one of the biggest water and transport systems in the entire world.

Folsom Dam, located on the American River above the city of Sacramento, is part of the Central Valley Project. It includes water storage (Folsom Lake), power generation and conveyance facilities.

Located just north of Fresno, the Friant Dam helps deliver water as it runs toward the Merced River. Built in the late 1930s, its waters helped transform the Central Valley into an agricultural powerhouse.

Owned by San Francisco, Hetch Hetchy Reservoir in Yosemite National Park provides water to nearly 3 million people in 29 cities across the San Francisco Bay Area. The water, provided by snowmelt via the Tuolumne River, does not require filtration.

Being one of the biggest hydroelectric facilities in the United States and a National Landmark, Hoover Dam generates power to serve more than 1.3 million people. The dam also provides flood control, irrigation, and water storage along the Colorado River.

“Infrastructure” in general can be defined as the components and equipment needed to operate, as well as the structures needed for, public works systems. Typical examples include roads, bridges, sewers and water supply systems.Various dams and infrastructural buildings have given Californians and the West the opportunity to control water, dating back to the days of Native Americans.

Lake Mead is the main reservoir formed by Hoover Dam in Southern Nevada. Created in the 1930s as part of Hoover Dam, Lake Mead provides water storage in the Lower Basin of the Colorado River.

Oroville Dam is the centerpiece and largest water storage facility of the State Water Project. Located about 70 miles north of Sacramento at the Feather River confluence, Oroville Dam creates a reservoir that can hold 3.5 million acre-feet of water.

Located on the west side of the San Joaquin Valley in the Coast Range foothills, San Luis Dam and Reservoir are used by the state and federal governments to store water diverted from the Delta.

Shasta Dam creates the largest storage reservoir in the state, Shasta Lake. In years of normal precipitation, the Shasta system stores and distributes about 20 percent of the state’s developed water — about 7 million acre-feet —through its massive system of reservoirs and canals.

The State Water Project (SWP) is responsible for bringing drinking water to 25 million people and provides irrigation for 750,000 acres of farmland. Without it California would never have become the economic powerhouse it is today.