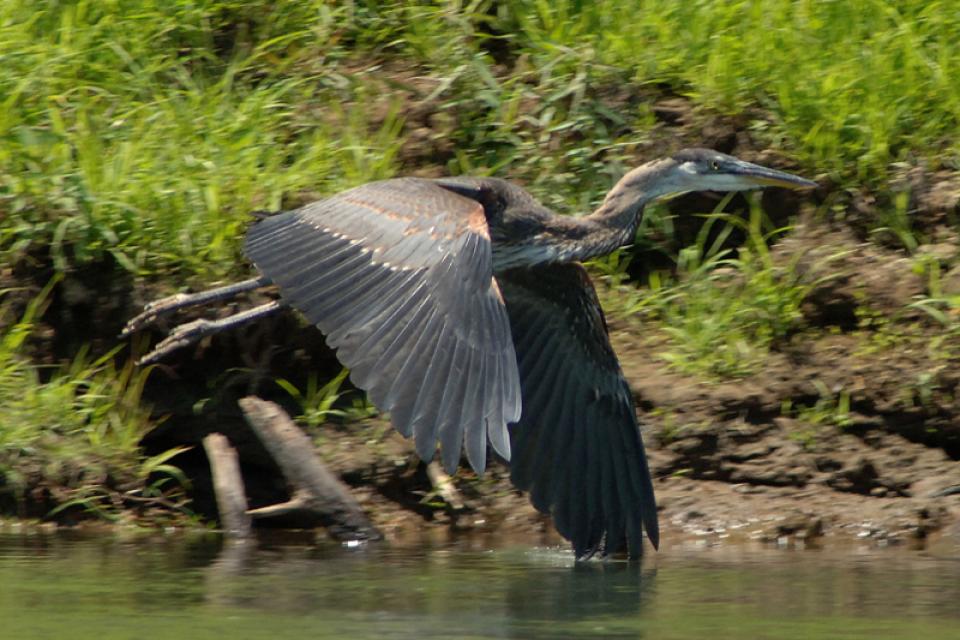 Environmental concerns have closely followed California’s development of water resources since its earliest days as a state.

Early miners harnessed water to dislodge gold through hydraulic mining. Debris resulting from these mining practices washed down in rivers and streams, choking them and harming aquatic life and causing flooding.

Elsewhere, water fueled an agricultural boom in the Central Valley and Sacramento-San Joaquin Delta. Farmers built levees, pumped water and irrigated the land. Ultimately, the extensive development of land for farms and suburbs eliminated 90 percent of California’s historic wetlands and 95 percent of its coastal wetlands, reducing the water areas where birds on the Pacific Flyway can rest.

Water built San Francisco and Los Angeles through vast pipeline conveyance projects. Meanwhile, the state and federal governments built large water supply projects, erecting dams and reservoirs to harness the snowmelt from California’s mountains, but in some cases cutting off salmon runs from their spawning habitat.

Eventually, environmental awareness had grown to an extent that environmental considerations were factored into the water supply equation.

Since the 1970s, California has pioneered some of the toughest state environmental legislation.

New laws focused attention on “instream uses” of water to benefit fish and wildlife, recreation, water quality and aesthetics – uses to which price tags cannot easily be attached. By 1990, these uses rivaled such traditional benefits as irrigation and navigation in importance. Such instream uses are recognized by the state constitution and Water Code as beneficial, and must be considered in administrative decisions and in issuing water rights permits.

Also in 1970, the California Environmental Quality Act and the National Environmental Policy Act were passed, requiring lead public agencies to prepare and submit for public review environmental impact reports and statements on major projects, including those involving water, with potentially significant environmental effects.

As part of this, in 1972 the state Legislature moved to preserve the North Coast’s free-flowing rivers from development by passing the California Wild and Scenic Rivers Act [on the heels of the national Wild and Scenic Rivers Act passed in 1968], preserving about a quarter of the state’s undeveloped water in its natural state. The act prohibits construction of dams or diversion facilities, except to serve local needs, on portions or entire rivers around the state.

The 1972 federal Clean Water Act is also one of the nation’s most sweeping environmental laws. In addition to water quality standards, the CWA regulates the filling or dredging of wetland areas. Through this and other environmental laws, the government began protecting wetlands, which filter pollutants, absorb floodwaters, recharge groundwater and shelter fish and wildlife.

In 1983, the California Supreme Court ruled that, in granting the Los Angeles Department of Water and Power’s licenses to divert water from Mono Basin streams in the eastern Sierra, the state of California had failed to account for protection of Mono Lake’s public trust values. In 1994, the State Water Resources Control Board set permanent streamflows for Mono Basin streams and a lake level of 6,392 feet to protect Mono Lake’s public trust values.

In two U.S. Supreme Court decisions, property-rights advocates have successfully limited the reach of environmental protection. In one case the court significantly expanded the class of individuals and entities who can sue under the federal ESA to include those claiming economic injuries arising from ESA-based actions. Another case determined a landowner who was restricted from developing her property, which is a wetland, could go to trial and seek compensation for alleged economic loss caused by the land use restriction.

Federal and state initiatives during the 1990s tried to reduce ESA conflicts by replacing the single-species protection approach with broader concepts of biodiversity planning and habitat management. Habitat Conservation Plans became an attempt to allow non-federal property owners to conduct lawful activities on their property that might result in an “incidental take” of an endangered species, if certain conditions are met. Incidental take permits may be issued by the U.S. Fish and Wildlife Service and the National Marine Fisheries Service.

Despite all these agreements, conflict continues. For example, the threatened Delta smelt, whose population has plummeted with the Bay Delta‘s health, induced a federal court order in 2007 to reduce Delta pumping to study the inadvertent killing of the fish. Yet, restrictions on pumping mean agricultural losses and water shortages for the public.

Endangered species also are a major concern at the Salton Sea, California’s largest lake extending from the Coachella Valley into the Imperial Valley in the southeast corner of the state. Saltier than the ocean, the receding sea is a vital link for migratory birds on the Pacific Flyway. Finding a long-term plan to preserve the sea and minimize the air quality concerns associated with exposed playa has been challenging. The state’s Salton Sea Management Plan is a multiyear effort designed to address public safety and environmental health issues.

Climate change adds complexities and questions regarding environmental impacts in the future. For example, rising water temperatures are attracting invasive species to waterways in which they have not previously lived. Scientists say the survival of a vast majority of California’s 121 native fish species is threatened because of climate change impacts.

The California Water Plan recognizes climate change as a threat to water supply reliability, and remains a key issue as state experts work to determine how to best incorporate a changing climate into water management planning, including flood planning due to a sea level rise, peak flow changes and a reduced snowpack.

In 2018, the Fourth National Climate Assessment said that the increase in heat and reduction of snow under climate change have amplified recent hydrological droughts and that climate models suggest the possibility of an 8.6-degree Fahrenheit increase in Southwest regional annual average temperature by 2100. Under that scenario, much of the mountain area in California with winters currently dominated by snow would begin to receive more precipitation as rain, and then only rain by 2050.