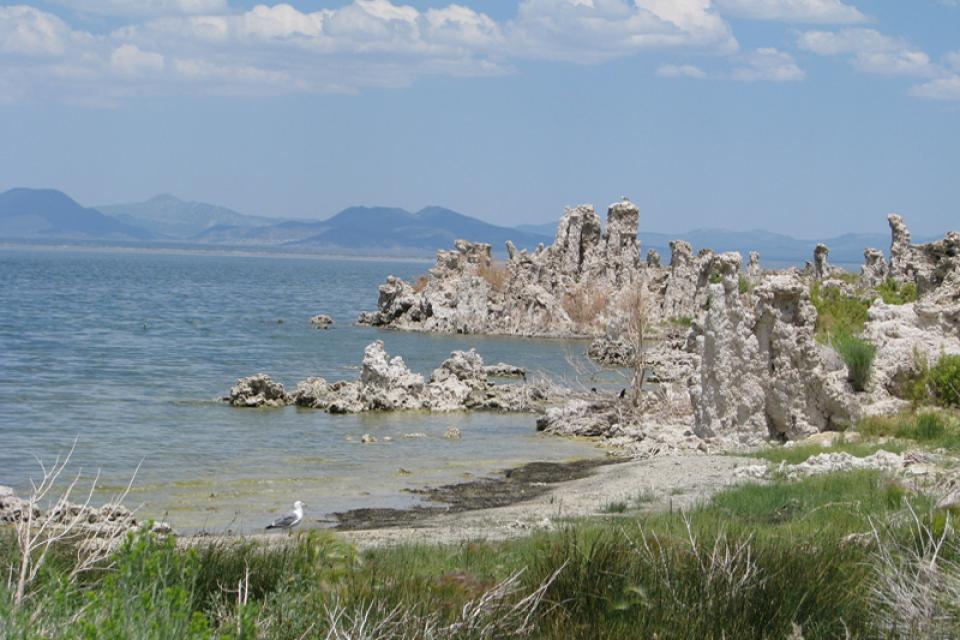 The carbonates also make the lake highly alkaline. These minerals and salts have accumulated in the lake for thousands of years since Mono Lake has no natural outlet other than evaporation.

“An unpretending expanse of grayish water…with two islands in the center, mere upheavals of rent and scorched and blistered lava, snowed over with gray banks and drifts of pumice stone and ashes…” Mark Twain, Roughing It

Los Angeles began diverting water from Mono Lake tributaries in the 1940s, extending the Los Angeles Aqueduct from the Owens Valley. Forty years later, the water level of the lake had dropped more than 40 feet. The decline in the lake level and simultaneous increase in salinity jeopardized the basin’s unique shrimp and bird populations. The lowered lake also uncovered stretches of the highly alkaline lake bed. When the lake bed is exposed to the wind, dust storms are created that are harmful to human respiratory health.

The National Audubon Society joined with the Mono Lake Committee in a lawsuit against the Los Angeles Department of Water and Power in 1979. In a 1983 landmark decision, the California Supreme Court held that the public trust doctrine applied to Los Angeles’ rights to divert water from Mono Lake’s feeder streams.

Later, an injunction was issued in 1991 by a superior court halting LADWP’s water exports. The State Water Resources Control Board then adopted additional restoration plans for Mono Lake, including limiting LADWP diversions until Mono Lake rises 20 feet (which is forecast to occur by 2021).