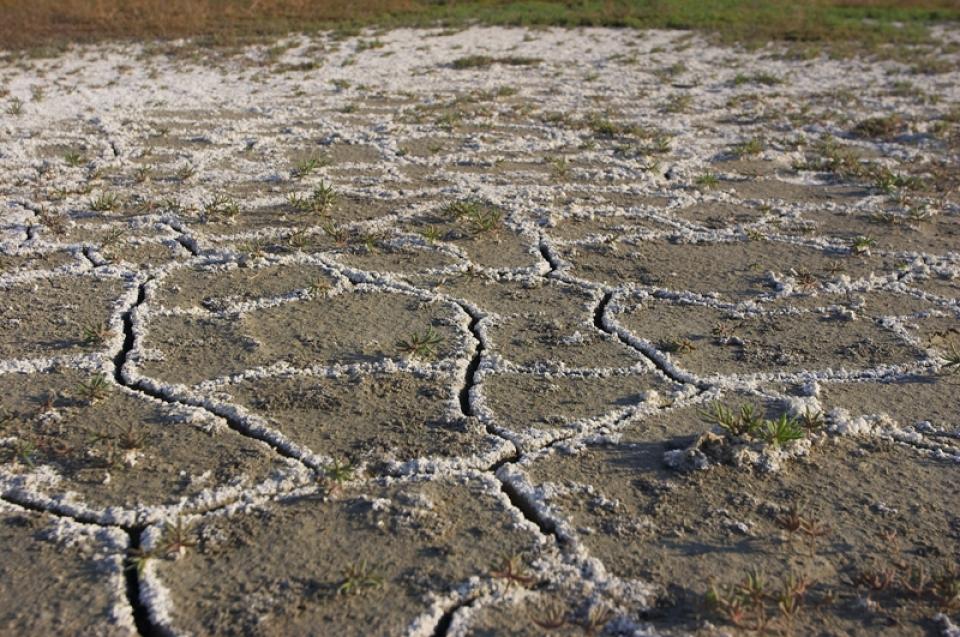 Excess salinity poses a growing threat to food production, drinking water quality and public health. Salts increase the cost of urban drinking water and wastewater treatment, which are paid for by residents and businesses. Increasing salinity is likely the largest long-term chronic water quality impairment to surface and groundwater in California’s Central Valley. Salinity, including nitrate, from past and current sources impair beneficial uses of waters throughout the Valley landscape and result in pollution of drinking water sources for some Central Valley communities.

Seawater is about 35,000 ppm salt. Salt enters waterways from contact with rocks containing soluble minerals, which is how even “fresh” water far from oceans can become especially salty. This is particularly true for groundwater, which can accumulate tremendous concentrations of salt while traveling between mineral-containing rocks for thousands of years. Salty groundwater can be pulled much closer to the surface by inadequate removal of vegetation, improper land use, industry and irrigation.

Sodium and potassium have a unique relationship that allows their proper balance to remove the body’s undesired fluids from the bloodstream. From there it reaches the kidneys for further processing into what will eventually become urea, excreted as urine and removed from the body. When too much salt is ingested, the harmony between sodium and potassium levels is disrupted and the kidneys are unable to eliminate enough water from the bloodstream. Kidneys become overwhelmed, leading to irreparable damage, including kidney stones and failure altogether. Additionally, unremoved fluid builds up to cause high blood pressure and heart problems.

Salinity promotes the accumulation of suspended particles (like clay) into larger chunks, allowing an unnatural amount of sunlight to infiltrate. This could scorch native plant species and encourage the proliferation of toxic, parasitic or highly competitive algae. Additionally, when salty waters contaminate soil, the soil’s structure and integrity are degraded, allowing for erosion.

According to the United Nations University’s Institute for Water, Environment and Health, excessively salty soils exacerbate climate change by prompting the emissions of more greenhouse gases.

Salty water is not good for crops such as carrots, beans, avocados and strawberries, which are particularly intolerant to salt. Deterioration of soil leads to damaged infrastructure, loss of productive farmland and reduced crop yields.

Salinity is enhanced in dry climates, owing to a lack of rainfall to rinse away any salt deposited from evaporation or transpiration. In addition to salinification of groundwater through long-term contact with underground rocks and minerals, California’s water supply gains salt through use of water softeners and from seawater intrusion.

To eliminate hard water and its resulting clogging of pipes, water softeners exchange magnesium and calcium with sodium or potassium, a process requiring a highly saline fluid that is ultimately deposited in sewers or leach fields for subsequent contamination.

Overpumping of groundwater leads to intrusion of seawater into freshwater aquifers, extreme examples of which include the Salinas Valley, Santa Clara Valley and Los Angeles County groundwater basins. Subsurface barriers and injection wells have been employed to enhance the quality of these drinking water aquifers. The former is a temporary remedy requiring inserting impermeable grout below the ground’s surface at sites with a risk of leaching salts (and other contaminants) to prevent them from seeping through to groundwater. Injection wells are drilled reservoirs for unwanted fluids and gases, in this case for saltwater, guarded by clay and rock below the lowest source of drinking water.

In the Central Valley, salt accumulation has resulted in 250,000 acres taken out of agricultural production and 1.5 million acres designated as salinity impaired. If salt remains unmanaged, direct economic costs to the valley could exceed $1.5 billion per year by 2030, according to the State Water Resources Control Board.

Based on that effort, in 2018 the regional water board amended water quality control plans for the Sacramento River and San Joaquin River basins and the Tulare Lake Basin to incorporate a salt and nitrate control program based on the CV-SALTS (Central Valley Salinity Alternatives for Long-Term Sustainability) salt and nitrate management plan. The amendments aim to ensure people affected by nitrates are provided with safe drinking water, permits are written to result in balanced salt and nitrate loading and that a plan of managed aquifer restoration over the long term occurs to restore drinking water supplies where “reasonable, practicable and feasible.”