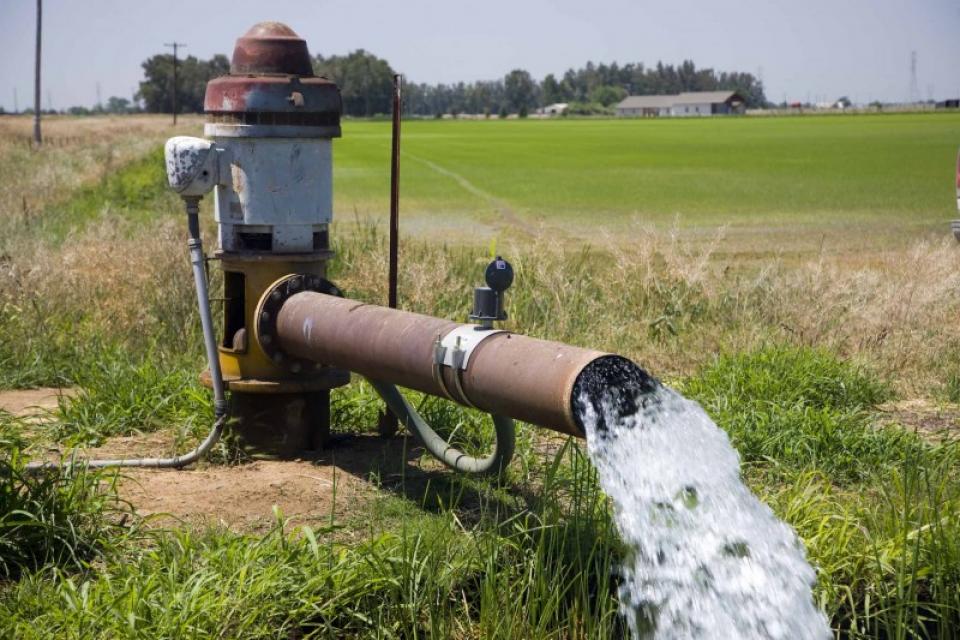 California’s enormous cache of underground water is a great natural resource and has contributed to the state becoming the nation’s top agricultural producer and leader in high-tech industries.

Groundwater is also increasingly relied upon by growing cities and thirsty farms, and it plays an important role in the future sustainability of California’s overall water supply.

Even so, groundwater has largely taken a backseat to surface water and California’s highly visible and famous system of dams and canals that transport it throughout the state. In an average year, roughly 40 percent of California’s water supply comes from groundwater. During a drought, that figure reaches as much as 60 percent.

Unlike those components of California’s surface water storage and delivery system, groundwater is out of sight, underground and most people are not familiar with the pumping facilities that bring it to the surface.

If California were flat, the volume of its groundwater would be enough to flood the entire state 8 feet deep.

Water gets into the ground mostly through snowmelt and rain seeping into the soil, broken rocks underneath the ground and through overland flow in channels, such as creeks, streams, rivers and ponds.

The water infiltrating the underground moves gradually, driven by gravity, into the saturated zone of the subsurface. From here, groundwater will flow toward points of discharge such as rivers, lakes or the ocean to begin the cycle anew. Groundwater is collected with wells and pumps, or it can flow naturally to the surface via seepage or springs.

Groundwater can be thousands of years old, although typically it is extracted within years or decades after it originally moves underground through small openings within porous material, called aquifers.

Aquifers can be several feet thick or several thousand feet thick. California’s alluvial aquifers are composed of gravel, sand, silt and clay that have been eroded from surrounding rocks and then are deposited by running water and sometimes wind. Aquifers in the Central Valley and in Los Angeles Basin can hold large quantities of water. California’s largest and most heavily used groundwater basins are in the Central Valley.

Because these alluvial aquifers are generally very permeable, they can provide large quantities of water to wells.

Although the exact number of water wells in California is unknown, estimates are that the number lies between 700,000 and more than 1 million.

No one knows exactly how much water can be stored within California’s 515 alluvial groundwater basins and subbasins. DWR estimates their total storage capacity at somewhere between 850 million acre-feet and 1.4 billion acre-feet, more than 10 times that of all the state’s surface reservoirs. To put that in perspective, one acre-foot is enough to serve an average family for two years. However, how much of that groundwater is usable and economically available is unknown.

But the amount of groundwater that is a part of the water supply varies considerably depending on the hydrologic region and basin.

About two-thirds of the people living in Southern California rely on groundwater sources for about 50 percent of their water.

Just inland from the coast, the Salinas and Santa Clara valleys, the coastal plains of Los Angeles and Orange counties, and the interior basins of Riverside, San Bernardino and Inyo counties all have intensely utilized alluvial aquifers.

The use, transfer, depletion or contamination of one can directly affect the other. And unless surface water is available to recharge the aquifers, groundwater levels will decline and the water quality will degrade.

Flood and furrow irrigation are important sources of groundwater recharge. The rate of absorption of rainwater into the ground is influenced by many factors. The amount of water that reaches the water table is called natural groundwater recharge. How much recharge occurs depends upon river conditions, the rate and duration of rainfall and irrigation, soil moisture conditions, the water table depth and the soil type. Irrigation canals, where unlined, also have been important sources of recharging the aquifers below them. In general, it takes several years of average or above-average precipitation to recharge aquifers in California to pre-drought levels.

When it comes to recharge, the individual basins vary greatly. The time it takes for surface infiltration to reach an aquifer as deep as 400 feet may take hours, days, or even years, depending on the rate of recharge. In some of the flood-irrigated areas, groundwater levels in nearby domestic wells rise within a few hours to days of flood-up.

State, regional and local water management strategies increasingly are recognizing the connection between groundwater and surface water and this has prompted policymakers to re-examine how groundwater is regulated and managed, how the rights to use groundwater are defined and enforced and how groundwater quality is protected.

Some communities including Orange County and Sonoma County have successfully managed their groundwater. Other communities have wrestled with the consequences of pumping too much groundwater, including seawater intrusion into coastal aquifers, reduced streamflows, loss of wetlands, riparian habitat and associated loss of aquatic species, and added costs incurred for replacing wells that go dry, pumping from deeper aquifers and land subsidence.

Contamination of groundwater from a variety of pollutants is also an increasing concern due to the potential health threats and because pollution compromises the ability of aquifers to help meet growing water demands.

Some groundwater is polluted with natural elements leached from the earth, including radon, boron and arsenic. In addition, extensive contamination is created by synthetic elements including some pesticides, herbicides, fertilizers, cleaning solvents and fuel ingredients. [See also Groundwater Treatment.]

While agencies in some basins have made good progress in stabilizing their groundwater, subsidence continues in many areas, sometimes at a rate of more than 1 foot per year. In the San Joaquin Valley, subsidence from groundwater extraction has greatly affected infrastructure such as the California Aqueduct, Delta Mendota Canal, Friant-Kern Canal and San Luis Canal, as well as private canals, bridges, pipelines, and storm sewers.

In California, groundwater is intensely managed in some locations, including banking groundwater to store for future use, and in other places is hardly managed at all. Until 2014, California did not have a statewide groundwater management system.

Nevertheless, like disputes over water in streams and reservoirs—over division of supplies, protection of water quality and preservation of natural assets—groundwater management presents similar challenges that must be addressed if the maximum benefits are to be realized.

Primarily, landowners in California are entitled to pump and use a reasonable amount of groundwater from a basin underlying their land to put it to a beneficial, nonwasteful use. [See also Groundwater Law.]

The importance of groundwater in the state’s overall water supply outlook will undoubtedly increase in the coming years as an ever-growing population places more demand on urban, agricultural and environmental uses. Interest in the connection between groundwater and surface water has also been heightened as a result of concerns related to water supply, water quality, ecology and aquatic species.

In adopting SGMA, California became the last Western state to regulate groundwater. Under SGMA, high- and medium-priority groundwater basins must establish local Groundwater Sustainability Agencies (GSA) to manage the basins or submit an alternative plan that meets the goals of the law. Those agencies must adopt plans that halt overdraft and bring groundwater basins into balanced levels of pumping and recharge. For critically overdrafted basins, balance must be achieved by 2040. For high- and medium-priority basins, 2042 is the deadline. The first of the local sustainability plans were submitted to the state in 2020 and implementation began immediately.

Whether SGMA will realize its full transformative potential remains to be seen. Speed bumps, detours, and other obstacles loom. For instance, the correlative right to use groundwater will likely be tested in court. Whether that results in more adjudicated basins remains to be seen but it is clear that negotiated settlements are preferable in order to retain the best outcome for locally based management. No one, including state legislators, wants the state to enter the fray and manage a groundwater basin.

Additionally, building groundwater storage involves several moving parts – finding the ideal geologic sites, erecting conveyance and having the upstream storage to hold the peak flows that are to be sent to the recharge basin. The promise, of course, is that recharge facilities can be built much faster than new surface storage, which takes as long as 20 years.

Water managers, regulators and the public all possess and share today a firmer understanding of the vital link between surface water and groundwater and the degree to which the connectivity has to be preserved and enhanced. In Central and Northern California, rivers are actively connected to groundwater, recharging groundwater on some stream sections and gaining groundwater on lower stream sections, thereby supporting important ecosystems and surface water rights. Under SGMA, this interconnectivity will be protected and enhanced.

In the end, groundwater sustainability will only be achieved if everyone recognizes and accepts that groundwater is a precious resource that requires careful management. Otherwise, in the event of a free-for-all, groundwater mining will result in increased pumping costs, high costs for well replacement, water quality constraints, subsidence, permanent loss of storage space in certain aquifers and damage to roads, canals and bridges.

Going forward, California will keep swinging between floods and drought. Its groundwater will continue to play a critically important role in bridging the gap between demand and supply – provided, of course, that the supply of groundwater is adequate to meet those demands.