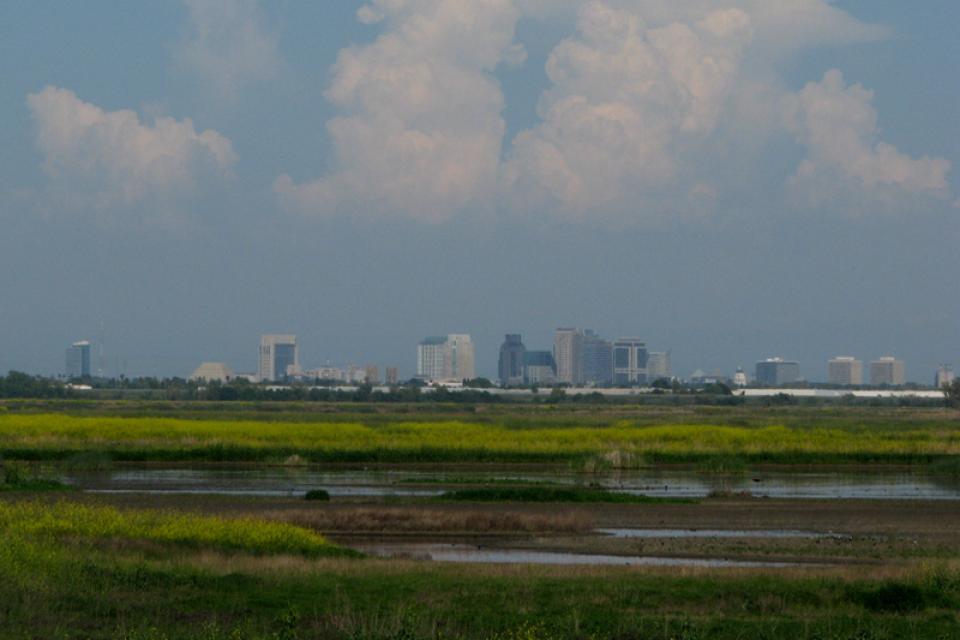 With the dual threats of obsolete levees and anticipated rising sea levels, floodplains—low areas adjacent to waterways that flood during wet years—are increasingly at the forefront of many public policy and water issues in California.

Adding to the challenges, many floodplains have been heavily developed and are home to major cities such as Sacramento. Large parts of California’s valleys are historic floodplains as well.

Despite levees and upstream dams, floods in these areas have caused billions of dollars in damage.

From an ecosystem perspective, it is important to recognize that development for farming, urban construction and flood control has removed virtually all of the historic riparian and floodplain habitat in the Central Valley and Sacramento-San Joaquin Delta. Stakeholders are pursuing innovative solutions to restore floodplain habitat on the landscape in a manner that benefits people and the environment.

On the Yolo Bypass, just northwest of Sacramento, for example, work to adjust or move levees is now underway and, when completed, will allow more water to flood the area more frequently. This will create important habitat for small fish – notably Chinook salmon smolts – while reducing the threat of damaging floods in communities downstream. Similar landscape modifications are underway or have been completed throughout the Central Valley.

Additionally, the Department of Homeland Security’s Federal Emergency Management Agency (FEMA) is required by statute to identify and map the nation’s flood-prone areas and establish flood-risk zones. But decisions to allow development in floodplains are made by local governments. FEMA’s maps are considered an important, if problematic, tool for flood hazard mitigation.

In California, for instance, questions arose about the adequacy of a FEMA 100-year flood designation—the 1 percent chance a flood will occur annually, or 1 in 100 chance of yearly flood— in the Central Valley after floods in 1997. Critics said the maps did not adequately depict areas reasonably likely to flood and do not incorporate the effects of upstream development, which rapidly pushes runoff to downstream areas.

The state Legislative Analyst’s Office (LAO) also noted in 2005 that FEMA’s mapping activities had not kept pace with changing conditions in California. The LAO noted that while the Department of Water Resources estimates that at least 50,000 of the state’s 200,000 miles of streams will likely see development during the next 20 years, FEMA has mapped only 15,000 miles the past 30 years. The state has attempted to fill the gap through its own mapping program, which, while not as detailed as FEMA’s, does include analysis of areas outside of FEMA’s designation of areas prone to a 100-year flood that may be at risk.

In addition to FEMA’s flood mapping efforts, Congress in 1992 created “AR Zones,” flood management restoration areas based on 100-year floodplains where levee restoration is underway. The designation can affect flood insurance rates and the design of new structures, but may not preclude new development. Eligibility for the AR zone is determined by the flood protection system being deemed restorable by a federal agency.

Flood mapping has particularly been the target of discussion in flood-prone Sacramento. The California capital is also considered one of the most at-risk cities for a major flood in the United States.

Following severe floods in the Sacramento-area in 1986, the U.S. Army Corps of Engineers reassessed the adequacy of the local levee system and estimated that a 100-year flood along the American River floodplain could cause up to $15 billion in damages and cost as many as 100 lives.

FEMA then mapped most of Sacramento into the 100-year floodplain in 1989. Much of the now heavily developed Natomas area, consisting of 86 square miles of land near the Sacramento International Airport, was also included in the revised FEMA floodplain.

Other projects to address levee under seepage (where water accumulates underneath the barriers) and erosion concerns allowed the Corps to certify most of the remainder of Sacramento’s levees for 100-year protection. Areas still within the 100-year floodplain include the South Sacramento, Mayhew and Pocket areas, and areas affected by local streams and storm drainage issues.

After Natomas was declared to be high risk in 2006, a levee protection program was launched. The Natomas Levee Improvement Program aims to provide at least 100-year flood protection and lay the groundwork for 200-year flood protection. Such efforts would significantly reduce the risk of an uncontrolled flood, one with estimated costs of $7 billion. Such flooding could also disrupt operation of the Sacramento International Airport and close Interstate 5 and State Route 99.

Meanwhile, Sacramento Area Flood Control Agency and the Corps have worked with the state to restore 100-year flood protection for most of the Sacramento urban area. More than $460 million has been spent on levee improvements.

And in 2012, West Sacramento, addressing an ongoing problem with under seepage, completed a $27 million project to reconstruct more than 8,000 feet of levees.

Floodplains and the Central Valley

California’s Department of Water Resources has a Central Valley Flood Protection Plan in place, which is considered a crucial first step in re-assessing how floods are channeled through the Sacramento-San Joaquin river systems. The Flood Plan is a 25-year, $17 billion blueprint that includes the acquisition of as much as 40,000 acres of land to accommodate flood waters as they drain from the Sacramento and San Joaquin river watersheds.

Sacramento, one of the cities most at risk of catastrophic flooding, benefits from the Yolo Bypass west of the city, where flood waters from the Sacramento River are funneled. About 100 miles upstream from the city on the Sacramento River, the Hamilton City Flood Damage Reduction and Ecosystem Restoration Project features seven miles of setback levee to improve flood protection for Hamilton City and restoration of about 1,500 acres to native habitat.