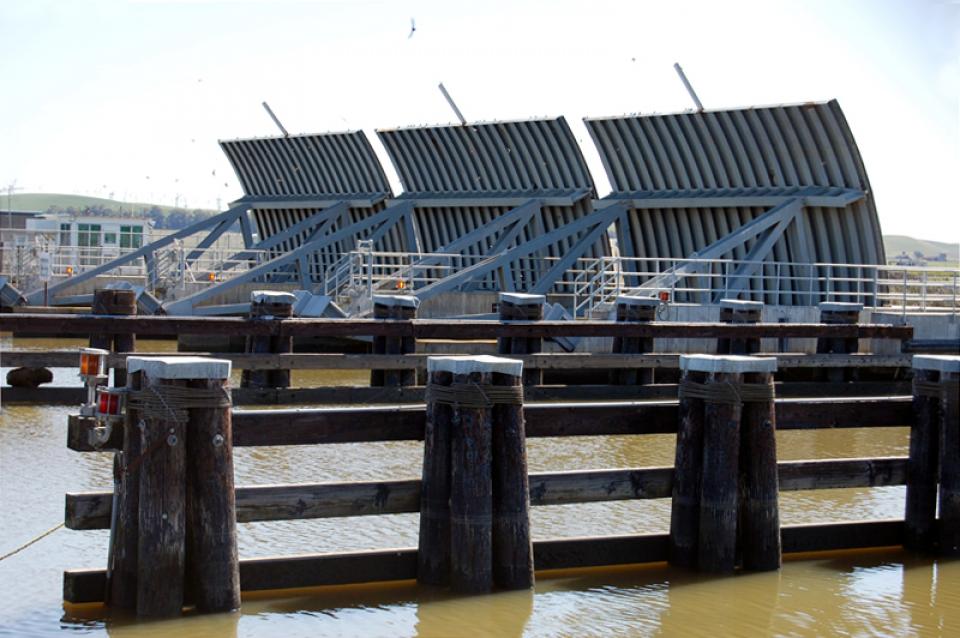 The Sacramento-San Joaquin Delta always has been at the mercy of river flows and brackish tides.

While the Delta ecosystem evolved around this fresh/salty cycle, the need to keep the Bay’s brackish water away from the rich Delta soils and local farms was seen as essential, and as early as 1880 the state proposed building a barrier between the Bay and Delta.

The discussion of Delta salinity often invokes “X2,” the distance in kilometers from the Golden Gate Bridge to the point where the salinity on the bottom is about 2 parts per thousand (ppt) and is the basis for standards to protect aquatic life (seawater salinity is about 35 ppt).

X2 differs from other standards designed to protect agricultural, municipal and industrial uses. It is a more broadly-based standard designed to protect estuarine habitat and the aquatic organisms and food web‎ relationships that are dependent on the quality and quantity of that habitat.

Today, there are several methods used to block salty water from reaching the Delta. These include:

Officials are also considering construction of new channels, such as an isolated facility, to isolate export fresh water from brackish Delta waters and prevent commingling between the two when exported

Such approaches are all to help reduce salt intrusion in the Delta and improve the quality of the water transferred from the rivers to the export pumps.

Since most Delta islands are below sea level, water from surrounding channels seeps through the levees and onto the land. Farmers must then pump this water off the land while adding controlled amounts of fresh water for productive agriculture.

In the south Delta, where farmers rely primarily on the waters of the San Joaquin River for their irrigation supply, the process of irrigation concentrates salts in the agricultural drainage water, which is then pumped into nearby Delta channels. Sometimes there is no current to flush these salts through the Delta, creating localized salinity problems.

The salt content of drainage water flowing down the San Joaquin River in the Delta, primarily from the west side of the San Joaquin Valley, is high, and sources of dilution water are limited.

A sound, well-maintained levee system is also vital to protecting the Delta’s water quality, as well as the farms and towns and transportation corridors on Delta islands. When levees fail, water rushes into the lower-than-sea level islands, pulling in salt water from the Bay and reducing water quality.

The State Water Project and federal Central Valley Project built salinity control gates at Suisun Marsh – the gateway to the Delta – in 1989. The gates at Montezuma Slough serve as a barrier for salty waters while allowing freshwater ebb tides from the Delta.

These are among the main issues regarding salinity in the Delta.

Long-term, reduced water quality resulting from large amounts of salt water drawn into the Delta could shut down the export pumps that supply fresh water to agriculture and cities.