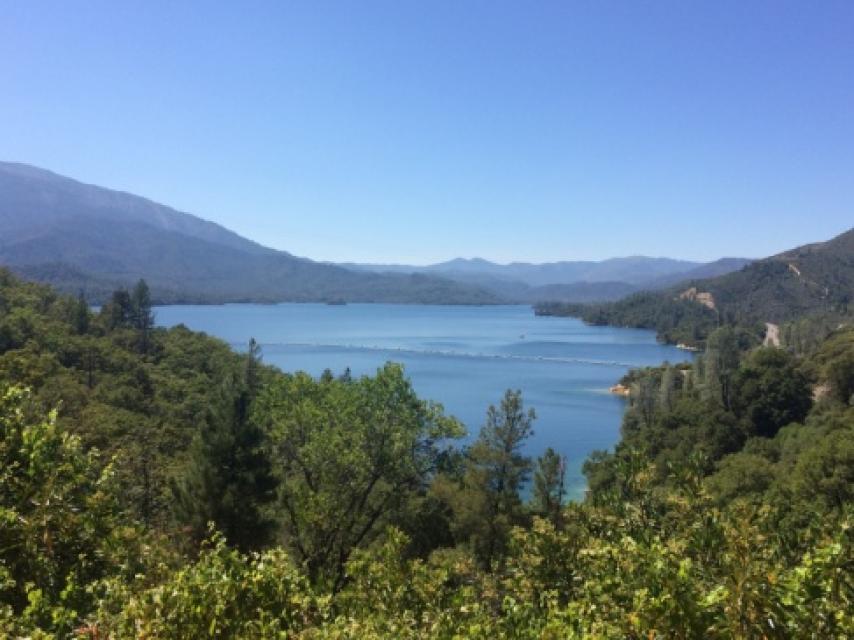 Whiskeytown Lake, a major reservoir in the foothills of the Klamath Mountains nine miles west of Redding, was built at the site of one of Shasta County’s first Gold Rush communities. Whiskeytown, originally called Whiskey Creek Diggings, was founded in 1849 and named in reference to a whiskey barrel rolling off a citizen’s pack mule; it may also refer to miners drinking a barrel per day.

The reservoir is connected to the Central Valley Project in the northwestern region of the Central Valley. The reservoir’s dam was built on Clear Creek, a tributary of the Sacramento River, where it drains part of the Trinity River basin. With its capacity of about 241,100 acre-feet, the lake is a popular recreation destination and helps with flood control, irrigation and hydroelectric power.

Construction was finished on Whiskeytown Dam in 1963, submerging much of the original town under the reservoir and prompting the moving or demolition of many structures and even the Whiskeytown Cemetery. When water levels are low enough, the foundation of some original buildings is still visible.

This reservoir joined the then-unfinished Central Valley Project - a federal dam system transporting water 450 miles to the Southern San Joaquin Valley – and delivers water from the Trinity River basin to the Sacramento River. The Whiskeytown Dam was dedicated by President John F. Kennedy on September 28, 1963.