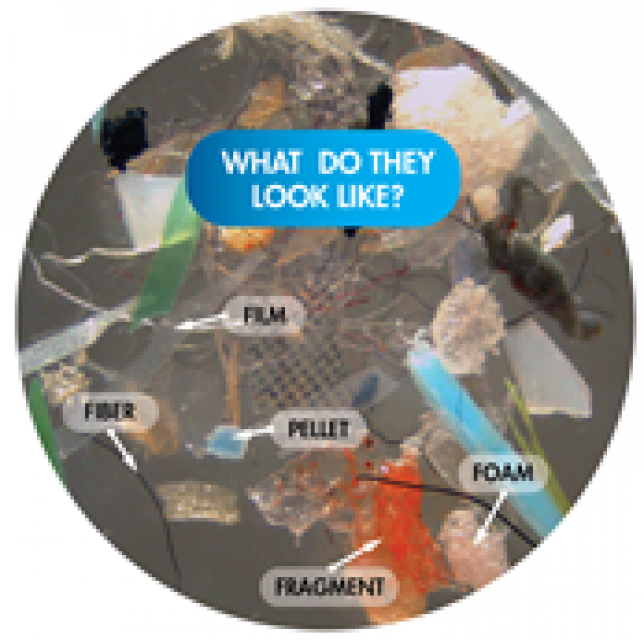 Microplastics – plastic debris measuring less than 5 millimeters – are an increasing water quality concern.  Entering the water as industrial microbeads or as larger plastic litter that degrade into small pellets, microplastics come from a variety of consumer products.

Microbeads have been used in exfoliating agents, cosmetic washes and large-scale cleaning processes. Microplastics are used pharmaceutically for efficient drug delivery to affected sites in patients’ bodies and by textile companies to create artificial fibers.

Part of their appeal to hygienic and medical interests is their tendency to absorb surrounding chemicals and later release them. This quality makes microplastics ideal as small commercial sponges, but especially dangerous as water contaminants, potentially carrying harmful chemicals through the food chain as they are ingested.

Additionally, these particles are usually composed of polyethylene or polypropylene plastic, which take thousands of years to naturally biodegrade. Consequently, most water treatment plants are unable to remove them, as they require prohibitively high temperatures to fully break microplastics down. Health effects from consumption are currently under investigation.

Many advocacy groups have published lists of products containing microbeads in an effort to curb the purchasing, and therefore the pollution, of microbeads.

Federal law phases out the use of microbeads in rinse-off cosmetics beginning in July 2017. Dozens of states have some kind of laws regulating microplastics, nine of which preceded the federal microbead ban.

California has the strictest microbead limitation, not leaving room for selling products with biodegradable microbeads.

In 2019 the San Francisco Estuary Institute released the results of a three-year study that found about 7 trillion pieces of microplastic are discharged into the San Francisco Bay annually via stormwater, about 300 times greater than the estimated annual discharge from all wastewater treatment plants discharging into the Bay.

California lawmakers in 2018 passed a package of bills to help increase the knowledge of the risks of microplastics and microfibers on the marine environment and in drinking water.

The first part of the legislative package was satisfied in June 2020 with the State Water Resources Control Board’s adoption of an official definition of microplastics in drinking water. That law was followed by plans for a microplastics strategy that requires state agencies to investigate the problem and submit the strategy to the state Legislature by the end of 2021. A progress report along with recommendations for policy changes or additional research is required by the end of 2025.