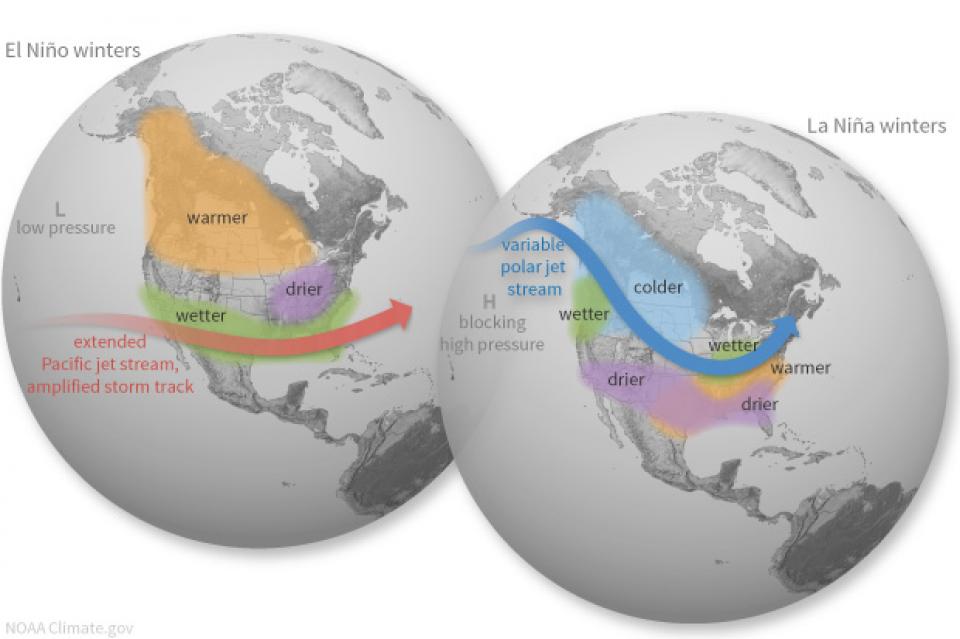 California’s seasonal weather is influenced by El Niño and La Niña – temporary climatic conditions that, depending on their severity, contribute to weather that is wetter or drier than normal.

El Niño and La Niña episodes typically last nine to 12 months, but some events may last for years. While their frequency can be quite irregular, El Niño and La Niña events occur on average every two to seven years. Typically, El Niño occurs more frequently than La Niña, according to the National Oceanic and Atmospheric Administration.

Although El Niño conditions can bring above-average precipitation to California in the winter, that is not always the case. Strong El Niño years, however, do tend to see wetter conditions in Northern California, where key reservoirs for the State Water Project and the Central Valley Project that collect precipitation for much of the state’s urban and agricultural regions are located.

El Niño is characterized by unusually warm water temperatures in the Pacific Ocean at the equator. El Niño’s storm track affects the location of jet streams. Instead of coming ashore in the Pacific Northwest, the southern jet stream hits California with increased rainfall that is typically accompanied by floods, landslides and coastal erosion. El Niño tends to make atmospheric rivers stronger. El Niño events in 1982-1983 and 1997-1998 drenched the West Coast with record rain. The last El Nino, a weak one, occurred in 2018-2019.

El Niño means the little boy or Christ child in Spanish. The name was chosen based on the time of year (around December) during which these warm-water events were historically observed off the coast of South America. El Niño is the warm phase of a larger phenomenon called the El Niño-Southern Oscillation (ENSO), a periodic fluctuation in sea surface temperature and the air pressure across the equatorial Pacific Ocean.

La Niña, which means the little girl in Spanish, is the opposite of El Niño, with a cooling of the ocean surface in the central and eastern tropical Pacific Ocean. La Niña winters typically result in dry conditions, particularly for Southern California.

La Niña results in cold ocean water developing off the West coast of the Americas, which pushes the jet stream north. In a La Niña winter, the storm track tends to hit the Pacific Northwest with heavier rain and flooding, sometimes dipping into Northern California. The American Southwest, meanwhile, is left drier than normal.

La Niña brings other changes, as well. The colder water off the Pacific coast is more nutrient-rich and attracts more cold-water species, such as squid and salmon, to coastal areas of California, according to NOAA.