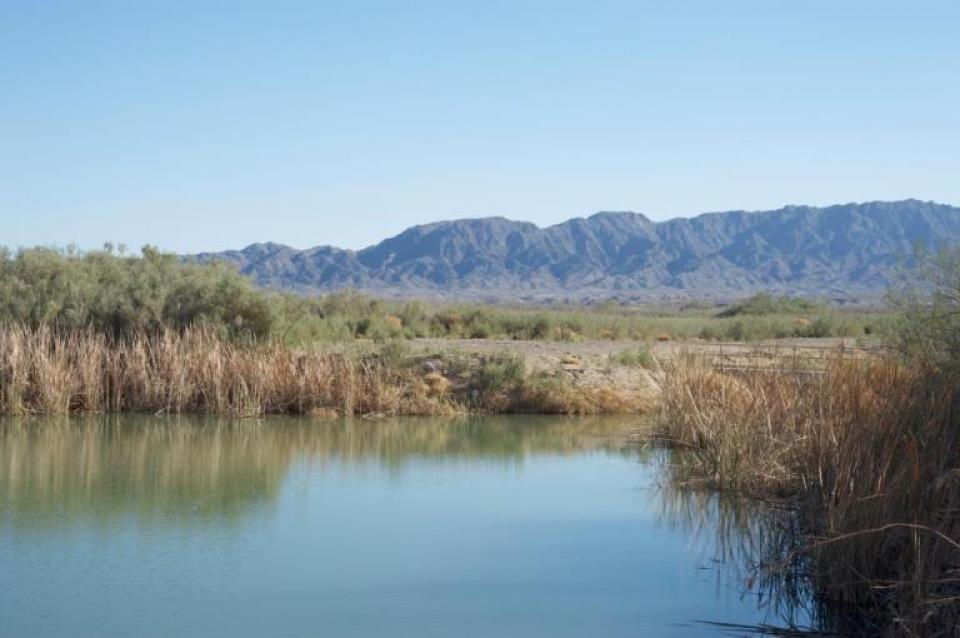 The Colorado River Delta once covered 9,650 square miles but has shrunk to less than 1 percent of its original size due to human-made water diversions.

Even so, the delta still provides important habitat. The desert estuary’s mix of fresh and tidal waters supports a diverse population of birds and animals, including the endangered Yuma clapper rail and the desert pupfish. It also is an important stopover along the Pacific Flyway, a major north-south migratory route for countless numbers of birds.

The Mexican Water Treaty of 1944 committed the U.S. to deliver 1.5 million acre-feet of water to Mexico on an annual basis, plus an additional 200,000 acre-feet under surplus conditions. The treaty is overseen by the International Boundary and Water Commission. [See also Colorado River Water and Mexico.]

Colorado River water is delivered to Mexico at Morelos Dam, located 1.1 miles downstream from where the California-Baja California land boundary intersects the river between the town of Los Algodones in northwestern Mexico and Yuma County, Arizona.

In 2012, providing water for the Colorado River Delta was one of the key components of Minute 319, an amendment to the Mexican Water Treaty of 1944. As part of the five-year restoration pilot program, the U.S., Mexico and nongovernmental organizations agreed to jointly provide a total of 52,696 acre-feet of water as base flows to keep water in the channels and Delta year-round for riparian vegetation. The Sonoran Institute, Pronatura Noroeste and Environmental Defense Fund secured one-third of the total flow that was allocated to the Colorado River in Mexico, while Mexico and the U.S. contributed the remaining two-thirds of the flows.

In 2017, a subsequent treaty amendment called Minute 323 stated that Mexico could continue to store water upriver in Lake Mead (straddling the Arizona-Nevada border), established how the two countries would make voluntary cutbacks in times of drought, committed the United States to financially support water efficiency projects in Mexico that will save more than 200,000 acre-feet of water, in return for a one-time water exchange; and required both countries to provide water and funding for habitat restoration and scientific work in the Colorado River Delta for the next decade.