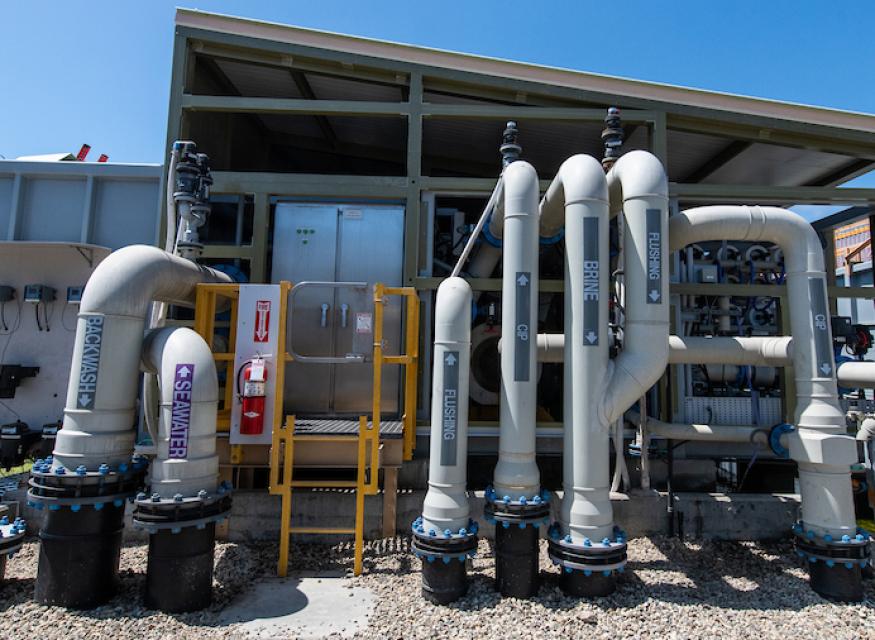 Recurrent droughts and uncertainties about future water supplies have led several California communities to look to treat salty water for supplemental supplies through a process known as desalination.

Desalination removes salt and other dissolved minerals from water and is one method to reclaim water for other uses. This can occur with ocean water along the coast and in the interior at spots that draw from ancient salt water deep under the surface or where groundwater has been tainted by too much salt.

There are two desalination processes to separate salt and other dissolved minerals from water. One method is reverse osmosis, which forces pressurized saline water through a semi-permeable membrane that inhibits the passage of dissolved solids, including salt. The other, electrodialysis, uses a combination of electrical charges and membranes to extract the salt and then separate the treated water into a fresh pool and a brine pool.

Desalination plants have treated brackish groundwater, irrigation runoff, seawater and domestic wastewater for decades in California. During the drought of 1987-1992, for instance, desalination was seen as a way of supplying additional water. The West Coast’s first seawater desalination facility was established on California’s Catalina Island in 1991.

Watch a video that explains more on desalination here.

During that same five year drought, the city of Santa Barbara built an ocean desalination plant that operated briefly but was shuttered as cheaper sources of water became available. In 2015, city leaders voted to return it to service at a cost of $72 million, $10 million of which was provided by the state. Today, it produces 3 million gallons of drinkable water each day, or about 30 percent of the city’s water.

Further south, in the San Diego County community of Carlsbad, the largest seawater desalination facility in the Western Hemisphere formally launched in 2015 after more than 10 years of development. The $1 billion project, which includes the plant, a 10-mile pipeline and improvements to delivery infrastructure, produces 50 million gallons of fresh water each day into San Diego’s local supply, enough to serve 400,000 people in San Diego County.

Desalination is energy-intensive, but has become more cost competitive with other water supply options in recent years, thanks to improved filtration technology. Water from the Carlsbad Desalination Plant costs between $2,302 and $2,559 per acre-foot, according to the San Diego County Water Authority, which has a contract to buy water from the plant.

In 2016, the State Water Resources Control Board adopted its policy for developing seawater desalination plants in California. The policy addressed potential adverse effects desalination plants can have on water quality, aquatic life and other beneficial uses of the ocean, specially targeting seawater intakes and brine discharges as major threats to marine resources.

California’s water supply has always teetered between the extremes of drought and flood and is heavily influenced by the demands of a growing population. Massive public works projects helped make the state’s system what it is today, but drought and a changing climate are game changers – calling for a revised view of water use that includes greater water conservation, reuse and, possibly, more desalination.