In Water-Stressed California and the Southwest, An Acre-Foot of Water Goes a Lot Further Than It Used To WESTERN WATER NOTEBOOK-As households get stingier with water, a common guide for describing how much they need gets a refresh 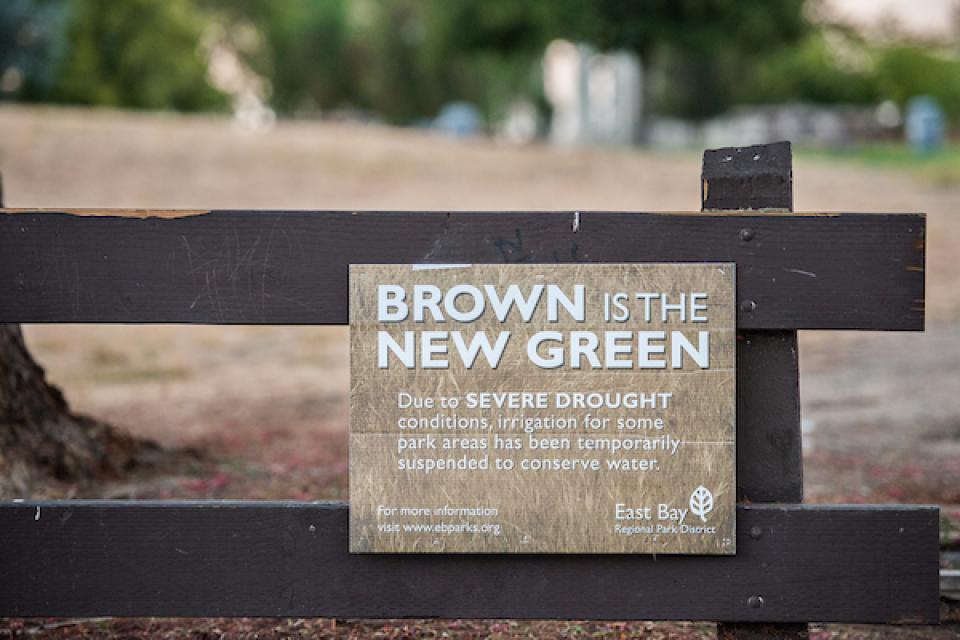 People in California and the Southwest are getting stingier with water, a story that’s told by the acre-foot.

For years, water use has generally been described in terms of acre-foot per a certain number of households, keying off the image of an acre-foot as a football field a foot deep in water. The long-time rule of thumb: One acre-foot of water would supply the indoor and outdoor needs of two typical urban households for a year.

The acre-foot yardstick has been a reliable standby for water agency officials to explain water use to the public, said Bill McDonnell, water efficiency manager with the Metropolitan Water District of Southern California, but “it was not super science.”

Science or not, it’s a description that’s stuck. But that acre-foot, equal to about 325,000 gallons, is being stretched amid increased water conservation in an urban landscape that has been buffeted by drought and squeezed for mandatory reductions.

Tim Quinn, executive director of the Association of California Water Agencies and a former deputy general manager with MWD, said it may be time to recalibrate the thinking on how much water is delivered to homes and businesses. 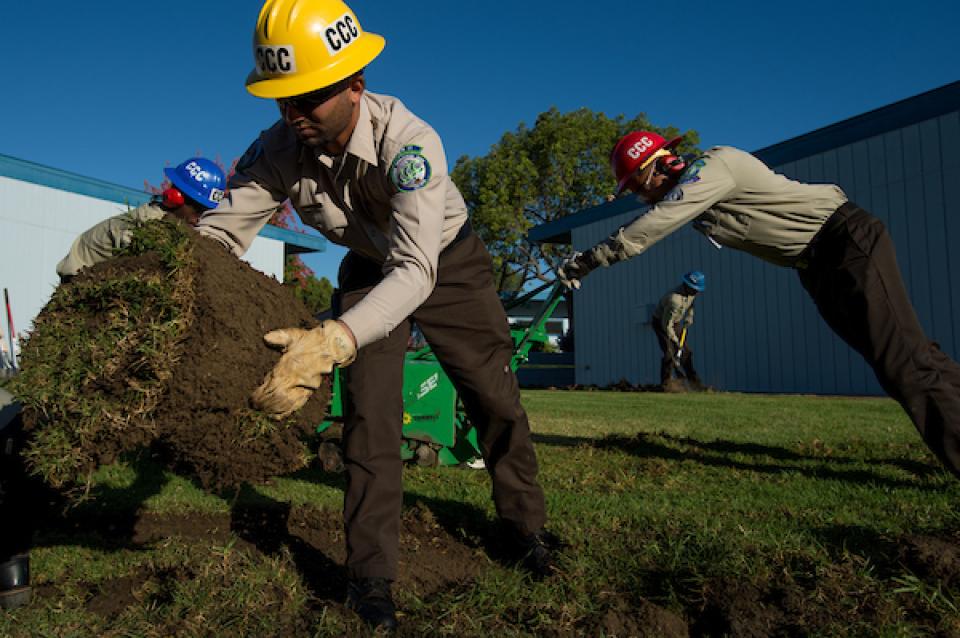 “The old rule of thumb going back 30 years was plan an acre-foot for each family in your service area,” he said. “Half of that acre-foot will be used on the homesite and the other half used in the economy of the area/region. At a minimum, we should look hard at that and do some recalibration because … per capita use has declined roughly by half. Right there, it means your half-and-half calibration is wrong.”

On average, an acre-foot now meets the needs of three households each year in MWD’s service area, which runs from Ventura County to San Diego County and into western Riverside and San Bernardino counties. The agency notes that average per capita water use in its service area dropped from 185 gallons per day in 1990 to just below 130 gallons per day in 2016.

“Because the gallons used per person, per day have gone down and stayed down, your acre-foot of water is going farther.”
~Bill McDonnell, water use efficiency manager, Metropolitan Water District of Southern California.

And it’s not just use, but the demographics of California’s urban sector that are changing. The number of people living under one roof has increased due to skyrocketing housing prices and the sluggish pace of new-home building, McDonnell said, adding that the average household in MWD’s service area has a little more than three people.

The revised view of water is something that’s been on MWD’s radar screen for the past couple of years. “Because the gallons used per person, per day have gone down and stayed down, your acre-foot of water is going farther,” he said.

In the dense urban environment of San Francisco, with its minimal outdoor irrigation, the daily per capita use is 50 gallons and an acre-foot annually supplies six households of three people each, according to Will Reisman, press secretary at the San Francisco Public Utilities Commission.

“Water use can vary significantly from home to home, so this is based on an average,” he said, adding that the agency assumes a single-family average occupancy of 3.02 people based on data collected from the Association of Bay Area Governments.

Average residential water use varies widely throughout California, depending on factors such as housing density, landscaping, water rates and when development occurred. Based on a sampling of 18 water agencies across California, the state estimated that in 2016, in the midst of the drought, an acre-foot was enough water to supply 3.4 households.

Overall, there has been a downward trend in residential use that fluctuates with normal or drought conditions, punctuated by high-profile announcements such as Gov. Jerry Brown ordering the first statewide mandatory water restrictions in 2015. 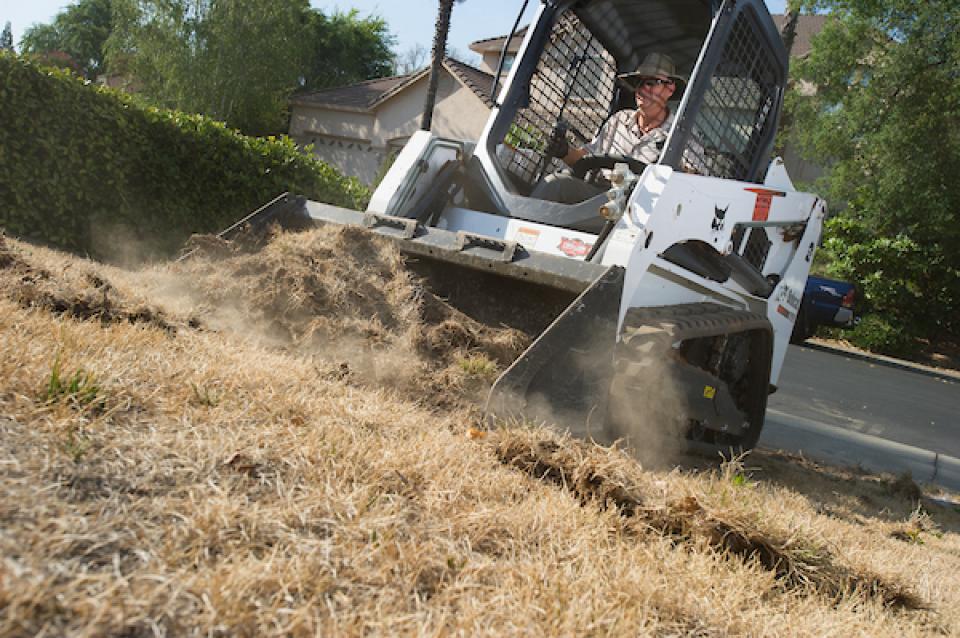 Coming in the middle of a historic drought, Brown’s order, among other things, caused people to rethink their outdoor water use, including on the State Capitol grounds where lush green patches of lawn faded to brown. The example caught on, with people proclaiming, “Brown is the new green.”

“There are still a lot of improvements that can be done, but just driving around, you can see people are OK with letting their yard go a little bit brown in the summer,” said Peter Brostrom, California Department of Water Resources’ water efficiency program manager.

That downward trend is also due to mandates such as the 1993 law that required all toilets sold or installed in California to use less than 1.6 gallons per flush – gradually replacing older models that used as much as five gallons per flush.

Meanwhile, the amount of water used by washing machines has come down significantly, from as much as 40 gallons per load to 16 gallons per load by the more efficient machines, Brostrom said.

On average, the urban sector used 10 percent of the state’s water supplies between 1998 and 2010, according to DWR. In a state as large and diverse as California, urban supplies stretch amazingly far. DWR last looked at residential water use more than a decade ago and is preparing to revisit the topic in 2019 to better understand the current state of water use efficiency.

“I think that will very much let us compare what our current uses are with what they were in 2006 and 2007,” Brostrom said.

Gov. Jerry Brown upped the ante on water conservation this year by signing a legislative package that establishes an indoor, per person water use goal of 55 gallons per day until 2025, ratcheting down to 50 gallons in 2030.

Calculating patterns in urban water use requires a bit of nuanced analysis, said Henry McCann, research associate at the Public Policy Institute of California’s Water Policy Center. People act differently during a drought when they are reminded constantly to save water. 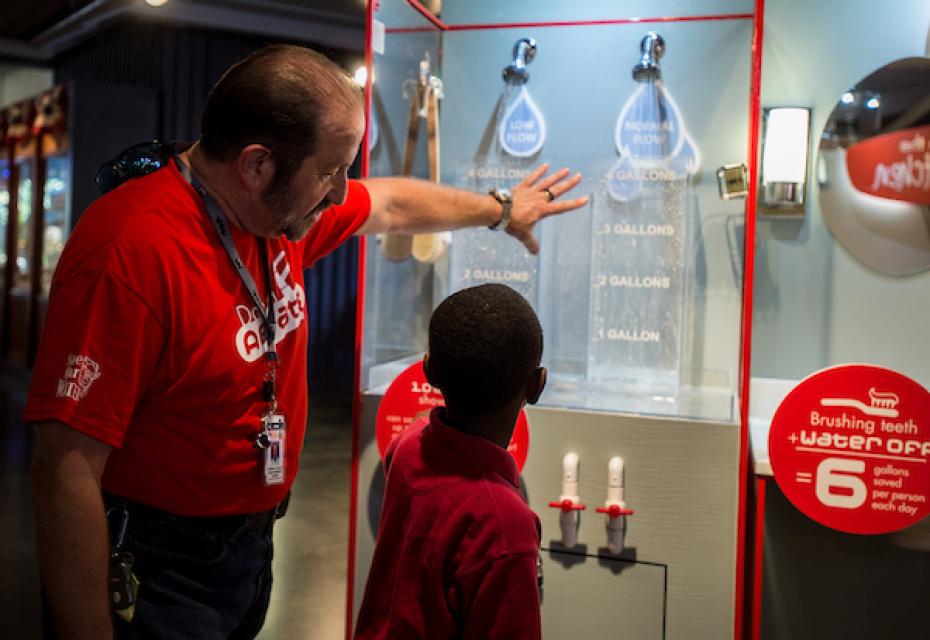 Just as behavioral changes drive water use, so do the newest technologies that allow people to be efficient.

“The hardware stuff is where it gets interesting,” McCann said. “Some Californians may have made investments in long-term water use efficiency – irrigation technology for the lawn and garden, turf replacement, water-efficient washing machines, low-flow showerheads and sink fixtures – that allow them to continue their business as usual but be using relatively less water in the process.”

Demand reduction to avert a crisis

Cutbacks in urban water use are a way of life in the desert landscapes of Nevada and Arizona, where the value of water is well-known as the Colorado River Basin becomes drier.

Faced with a growing number of people and a limited and vulnerable supply of water, officials in Southern Nevada recognized long ago that only a comprehensive demand reduction strategy was going to avert crisis conditions.

“When the sprinklers go on, that is the equivalent to 15 or 20 shower heads going off at the same time. People … are often not aware of what their landscape irrigation is doing because it’s on a timer. It goes off at 4 in the morning.”
~Peter Brostrom, California Department of Water Resources’ water efficiency program manager.

The most obvious target was outdoor use, a low-hanging fruit in a desert environment. The answer came through building new homes with natural landscaping, paying people to tear out turf from existing homes (more than 185 million square feet in about 20 years) and limiting when they can irrigate (hewing 15 percent off seasonal water use).

The effort has paid off. According to the Southern Nevada Water Authority, an acre-foot of water supports two average Las Vegas households for about 15 months (In 2005, it was about 12 months). Per capita water use has dropped 36 percent in 16 years even while 660,000 additional people decided to make Las Vegas their home.

In Arizona, an acre-foot is enough for three households. The state’s Department of Water Resources notes that despite a significant increase in people, Arizona uses less water in 2018 compared to 60 years ago because of drought preparedness, underground water storage, 100-year water supply requirements for new developments, mandatory conservation programs and use of recycled water.

A drive for more efficiency

While Arizona, California and Nevada are well-ensconced in a smart water use ethos, those who track water use know an acre-foot can be stretched even further.

“When the sprinklers go on, that is the equivalent to 15 or 20 showerheads going off at the same time,” Brostrom said. “People think of a drought and they think, ‘Well I have to take a shorter shower,’ but they are often not aware of what their landscape irrigation is doing because it’s on a timer. It goes off at 4 in the morning, and they don’t see it.”

Surrounding the discussion about further improvements in urban water use efficiency is the idea that eventually, the slack in the system will grow tighter, a situation known as “demand hardening.”

McCann said people tightened their belts in response to the governor’s order in 2015, partly through cutbacks in outdoor use. Future droughts will push everyone to save more.

“The writing is on the wall,” McCann said. “There will be a drive for more efficiency in indoor and outdoor urban water use and one of the potential challenges in future droughts is if we have to cut back another 25 percent or so, some of the savings may have to come from higher value uses like indoor water use.”

And while Southern California has generally led the way in smart water use, MWD’s McDonnell believes customers can get stingier with water.

“For every home that has an efficient toilet, an efficient washing machine, an efficient showerhead and a landscape that’s using drip and capturing rainwater, there are many more that don’t have it,” he said. “It’s not like there is a miracle technology out there. It’s just a matter of having more people do it.”