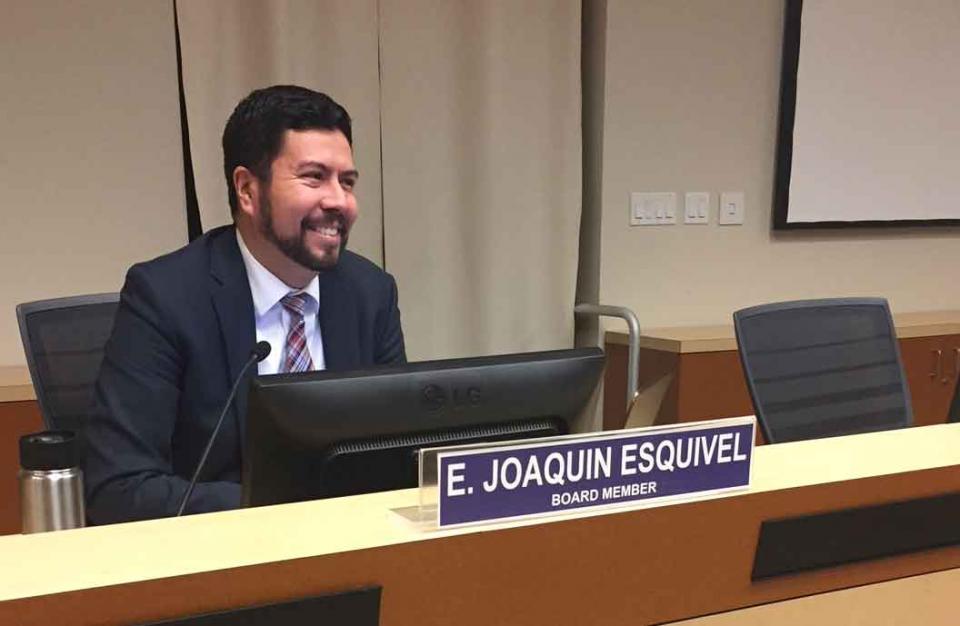 Joaquin Esquivel learned that life is what happens when you make plans. Esquivel, who holds the public member slot at the State Water Resources Control Board in Sacramento, had just closed purchase on a house in Washington D.C. with his partner when he was tapped by Gov. Jerry Brown a year ago to fill the Board vacancy.

Esquivel, 35, had spent a decade in Washington, first in several capacities with then Sen. Barbara Boxer, D-Calif., and then as assistant secretary for federal water policy at the California Natural Resources Agency. As a member of the State Water Board, he shares with four other members the difficult task of ensuring balance to all the uses of California’s water.

The Coachella Valley native and University of California, Santa Barbara graduate brings a youthful, tech-savvy focus to the State Water Board and has pledged to revamp the agency’s website, which he calls “our largest public-facing office.” He’s also active on Twitter, sharing news on water resources, data and technology.

With a year under his belt at the State Water Board, he spoke to Western Water in this lightly edited transcript about the Salton Sea restoration efforts, clean and affordable drinking water, the tensions between the state and federal governments and other things he’s learned since taking his seat.

WW: What have you learned since joining the Board?

I’ve been struck with the incredible complexity of the tasks at hand between basin plan amendments, our relationship with our regional boards and how difficult it is to set statewide policy that accounts for the incredible diversity, both in geographies and stakeholder constituencies, of most of our watersheds throughout the state. 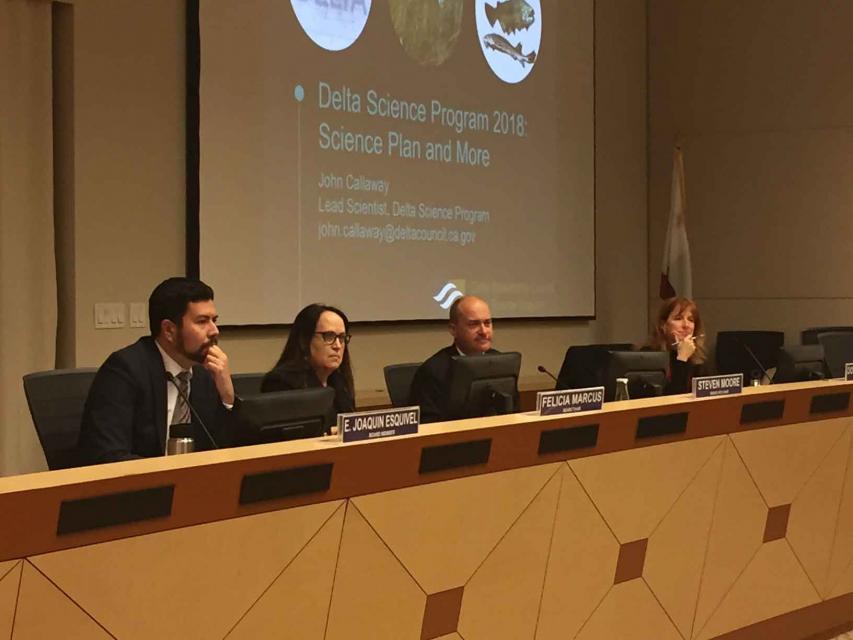 The enormity of the task and work before the Board can be incredibly humbling. … Folks sometimes ask, “What are your goals? What are your priorities?” For me, it revolves less around a set of priorities or a set of specific goals than more a question of, “What does a 21st century regulatory agency look like?”

A lot of it is, how do we improve the public’s understanding of the Board’s processes and our work and their opportunities to engage and inform it? How do we incentivize and collaborate more effectively as we pursue our more wicked and thornier issues around water management?

WW: What do you think your age and background bring to the State Water Board?

I am fortunate to straddle a time where computers and smartphones weren’t as ubiquitous as they are now. I grew up exposed to computers and technology and feel at home in that space.

I like to think I can bring a younger voice, a fresher voice to the Board. That’s not to say the Board has been a Luddite (one opposed to new technology) in all of this. You look at some of our database systems, they were at the cutting edge at the turn of the 21st century. The question is how might we improve upon those systems and how do we leverage advances in technology coming online to better understand the complexity of the challenges we face?

“How do we incentivize and collaborate more effectively as we pursue our more wicked and thornier issues around water management?”
~State Water Resources Control Board member E. Joaquin Esquivel

WW: It’s been said all data is useless unless it can be actionable. What is the appropriate role for data in decision-making, are we using it as well as possible and are there ways it can be better incorporated?

I don’t think we are using it to as great an effect as we could. A lot of it is the quality of the data we have, the interoperability if you will. There is a real issue on just how we do better with what we are already collecting and already have, let alone what do we need to do to get greater spatial resolution in our data. It’s not as if you need one database to rule them all, it’s about how we better assess the current resources we have and make them be able to talk to each other better.

WW: What about the relationship between the federal government and California?

Given the environment we live in currently with this administration and the narrative out there about this automatic antagonism that there should be between California and the Trump administration, it’s important to remember that when it comes to the many staff that inhabit these federal bureaucracies, they have been there and were working under previous administrations and will be there and work under future administrations.

“It’s important to maintain collaboration and a sense of professionalism with [federal agency staff] because we are all ultimately attempting to achieve the same outcomes in these watersheds.”
~State Water Resources Control Board member E. Joaquin Esquivel

It’s OK to have disagreements and you need to have that honest dialogue and pushback between the administration and the state. It’s important to remember we depend upon the collaboration with our federal agency counterparts. It’s important to maintain collaboration and a sense of professionalism with them because we are all ultimately attempting to achieve the same outcomes in these watersheds.

I try to separate the political antagonism that may exist between the administration and California officials with the day-to-day rank and file work that is important to maintain collaboration and communication with staff.

WW: What does the Board need to do to ensure a positive outcome at the Salton Sea?

Right now, it’s keeping the state on task and keeping a spirit of collaboration alive. We need to see projects on the ground at the sea and begin to build confidence that this is not insurmountable, that the sea can evolve in a way that is intentional on our part and maintains the ecosystem values and the health and viability of the communities around it.

There is a significant state investment between the Prop. 1 dollars that have already been committed and the potential for [more] bond dollars … and that’s good seed money. We’ll see projects that will build the confidence that we can address this. … I know there is a lot of pessimism and a lot of cynicism, rightfully so, because we can never work fast enough to catch up to where we need to be.

WW: The state has an increasing role in ensuring the access to safe, clean and reliable drinking water for everybody. Part of that process is the State Water Board’s recommended plan [since delayed] for the funding and implementation of the Low-Income Water Rate Assistance Program. Explain what you think the state’s role needs to be.

It’s a three-legged stool. One of those legs is affordability that plays broadly within everybody in the state [because] water rates are outpacing inflation.

What we learned rather quickly last year as we began to approach the deadline for the report to the Legislature was the complexity of instituting a statewide affordability program. No other state has such a program and given the patchwork of existing programs … how do you structure one that captures [the elements] of the existing programs? It’s going to take us a little more time.

Ultimately, what the report will do is lay out the information, perhaps draw some conclusions and point the Legislature in the direction in which they might be able to adopt and implement a new program.