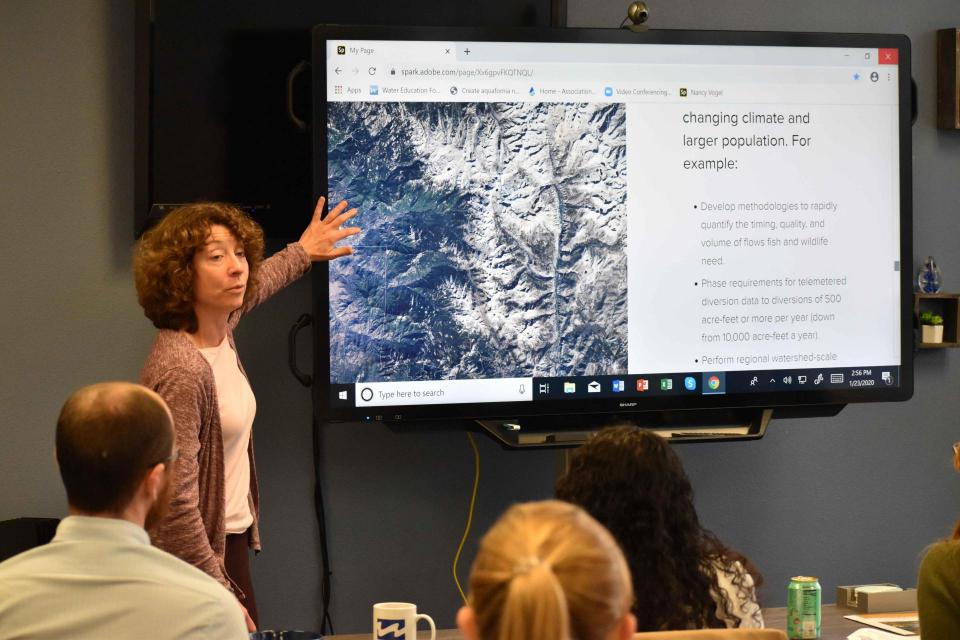 Within days, he appointed Nancy Vogel, a former journalist and veteran water communicator, as director of the Governor’s Water Portfolio Program to help shepherd the monumental task of compiling all the information necessary for the portfolio. The three state agencies tasked with preparing the document delivered the draft Water Resilience Portfolio Jan. 3. The document, which Vogel said will help guide policy and investment decisions related to water resilience, is nearing the end of its comment period, which goes through Friday, Feb. 7.

In an interview with Western Water, Vogel acknowledged that every governor seeks to put their stamp on solving the state’s water resource issues. The hope with the Water Resilience Portfolio, she said, is that it can be a catalyst for progress because California’s next drought or flood is never far away and the time to act is now.

Western Water: How would you describe the purpose of the portfolio?

NANCY VOGEL: It’s a high-level policy planning document, much like the Water Action Plan was for the Brown administration. It sets forth our priorities and it’s the blueprint for state agencies working on water. I’ve been impressed with just how much time and energy people have put into providing us input and making sure that it’s on the scale we need.

WW: You have been presenting the portfolio around the state. What’s the response been?

VOGEL: Its generally positive. People say they feel as if they’ve been heard. A lot of people say ‘I can see my comments reflected in the Portfolio, but I’m going to send you another set of comments because I have a quibble with this or that or you forgot X, Y or Z,’ and that’s a good opportunity for us to take another look.

This is a document that tries to steer state resources and efforts toward helping the very diverse regions of California be ready … to supply water to communities, the economy and the environment into the future despite climate change and increasing population.
~Nancy Vogel, Director of the Governor’s Water Portfolio Program

WW: The Sierra Club wrote that the document ‘suffers from an unprioritized list of actions and is ultimately a restatement of water policy depending heavily on a few large-scale and outdated water fixes.’ How do you respond to that?

VOGEL: We’ll have to agree to disagree on that. I do not think the draft portfolio depends on a few big projects. Our approach is diversified, as a portfolio should be. As for the criticism that this is a restatement, we have momentum coming out of the 2012-2016 drought and we want to continue to make progress without massive new mandates on local water districts or attempts at drastic reforms that would unleash uncertainty and stall progress.

WW: What’s the relevance of the portfolio to the average Californian? 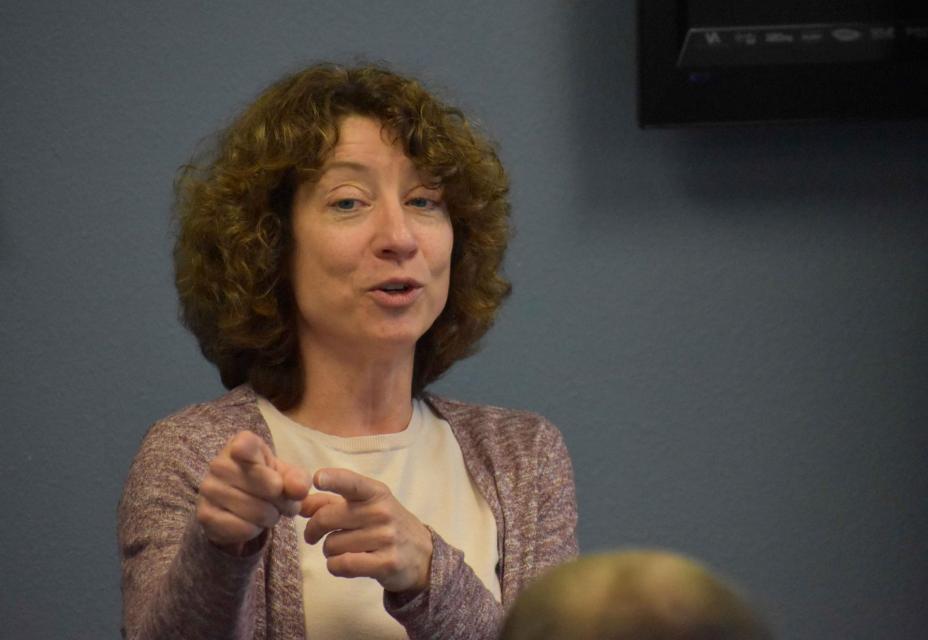 VOGEL: We all need water and food and want our grandkids to experience spring-run chinook salmon and snow geese. Nobody wants a California where fellow residents lose their homes to flood or tap water to drought. It takes a lot of planning and investment to maintain water supplies and natural systems in a state with such big geographic and timing imbalances in its water resources. This is a document that tries to steer state resources and efforts toward helping the very diverse regions of California be ready for more extreme conditions — drought and flood — and to be able to supply water to communities, the economy and the environment into the future despite climate change and increasing population.

WW: How does the portfolio address the land use changes that are anticipated to occur as a result of the Sustainable Groundwater Management Act?

VOGEL: The draft portfolio acknowledges that local planners face changes in their tax rolls, workforce and land uses, and the state can help local governments anticipate and adjust to those changes with funding and resources for planning. Land uses will change in some places, and that’s going to have a ripple effect on communities and county budgets.

Nancy Vogel
Age: 52
Education: Bachelor of Science, Conservation and Resource Studies, University of California, Berkeley. Master of Arts, University of California, Berkeley Graduate School of Journalism.
Previous jobs:Director of communications at the Resources Legacy Fund, from July 2017 to May 2019. Deputy secretary for communications at the California Natural Resources Agency from 2015 to 2017. Assistant director for public affairs at the Department of Water Resources from 2012 to 2015. Principal consultant for the California State Senate Office of Oversight and Outcomes from 2008 to 2012. Staff writer for the Los Angeles Times from 2000 to 2008 and The Sacramento Bee from 1991 to 2000, where water was part of her assignment.
Fun Fact: One of Vogel’s favorite places is the Knight Foundry in Sutter Creek in the Sierra foothills, a water-powered foundry that was a Gold Rush cradle of innovation – and is still operating, thanks to dedicated volunteers.

WW: The portfolio says a new emphasis on cooperation across state agencies and with regional groups and leaders is needed. How does that occur?

VOGEL: Our approach to the draft Portfolio embodies cooperation — we asked for extensive input. We wanted to hear about local concerns and what water managers think the state can best do to support them as they address those concerns. I think it’s a mindset. Sometimes people forget how much [Integrated Regional Water Management] has accomplished in terms of the way we look at collaboration on a watershed scale. And it’s easy to focus on the things that IRWM isn’t doing or isn’t doing as well as we’d like. But we’re in a much different place now in 2020 than we were in 2000 because of IRWM and we want to build on that. There are lots of other ways for regions to collaborate on a watershed scale and we’re open to that and we want to support that too. But we don’t want to take everything that’s been accomplished and all those human relationships forged in the planning efforts under IRWM — we don’t want to just toss that aside and start over. We want to build on that. And we need to improve the way we coordinate at the state level, too.

WW: How do you make sure this just doesn’t end up another book on a shelf and that there is follow through?

VOGEL: That will take sustained, high-level focus from Secretaries [Wade] Crowfoot, [Jared] Blumenfeld and [Karen] Ross [from Natural Resources, Cal EPA and Food and Agriculture, respectively] and I know they’re committed to that. We also task ourselves with doing an annual update on progress, in which the public will hold us accountable for what we’ve accomplished and have yet to accomplish. We get the resources, the right people in the right places, and we make progress.

WW: How did your experience in journalism prepare you for this task and to be an advocate for this portfolio? 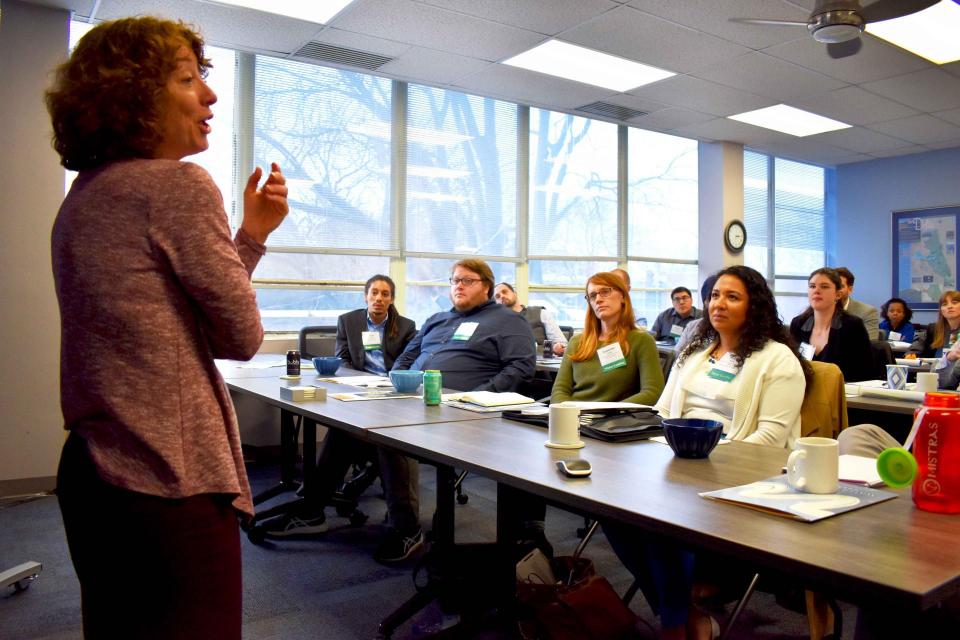 VOGEL: A journalist learns to listen and to absorb information quickly and to organize it. We had a lot of information coming in quickly as we began to prepare the portfolio and I think my experience with organizing information in a way that I could then disseminate to people who needed to make decisions helped. Journalists get to interview everybody who cares about an issue and so they end up with a unique perspective on a problem that’s valuable. And I felt like I got to do that in some ways as the person who was herding cats on the portfolio. I got to hear everybody’s concerns and that was a privilege. It’s hard to do justice to all the experience and knowledge and often conflicting but heartfelt values reflected in the input we got. We did our best. It was a team effort across the departments and the agencies. It’s been a lot of hours but so worthwhile. I just want to improve the document now and make it the best it can be.