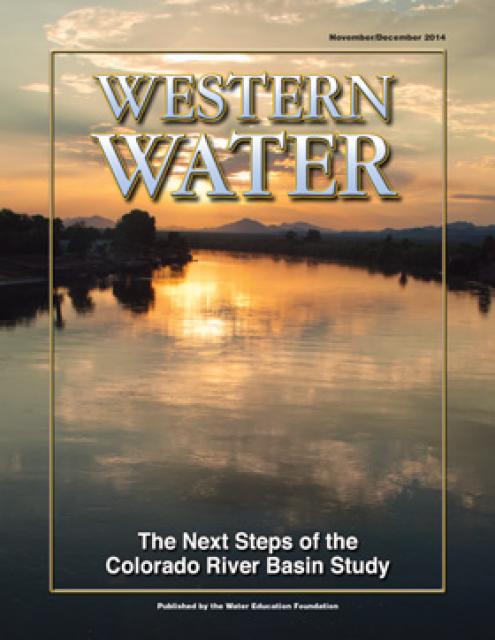 After much time, study and investment, the task of identifying solutions to ensure the long-term sus­tainability of the Colorado River is underway. People from the Upper and Lower basins representing all interest groups are preparing to put their signatures to documents aimed at ensuring the river’s vitality for the next 50 years and beyond.

As Western Water went to press, the Bureau of Reclamation (Reclamation) announced that reports from the stakeholder groups, known as “Phase 1,” would not be released until after the first of the year. But much of the work is done, according to stakeholders.

The groups’ work is based on the findings of the 2012 Colorado River Basin Water Supply and Demand Study, which suggests that the demand for water will exceed supply by 3.2 million acre-feet, on average, by 2060. (An acre-foot of water is about 326,000 gallons and can meet the annual needs of two urban households.)

With the 2012 release of the Basin Study, federal officials and stakeholders began a consultative process aimed at producing practical and viable solutions to future management of the river. Three workgroups examined municipal and industrial conservation and water reuse, agricultural conservation, productivity and water transfers and environmental and recreational flows.

“We are taking the Basin Study’s very high level findings and digging into them in more detail to [find] where are the on-the-ground opportunities,” said Carly Jerla, the Reclamation engineer overseeing the project.

In conversations with workgroup participants said the broad picture is one of more conservation, suggested instream flows and some farmland fallowing and water marketing.

“We just finished Phase 1 of the next steps process,” said Reagan Waskom, director of the Colorado Water Institute in Fort Collins, Colo. “The big question is what is in Phase 2 and that has not yet been resolved.”

Noting that agricultural and urban water users “have water rights they currently enjoy and want to keep enjoying,” Waskom cautioned that “some people will be frustrated that the output of Phase 1 isn’t more earth-shaking or illuminating.”

Given the long history of the river’s development for all the purposes it serves, any dramatic changes in allocations or flows is destined to be a carefully thought out and planned process. “Certainly in the ag sector, the conversation has to move deliberately and slowly to keep everybody at the table and working well together,” Waskom said.

The workgroup started in 2013 with a “blank slate” because the Basin Study “didn’t really address environmental and recreational problems or solutions,” she said. As such, “we were just trying to build a foundation for the next steps.”

The reports come during a critical time in the Colorado River Basin, a sprawling tableau that drains 243,000 square miles through the river’s 1,450-mile course from the highest peaks in the Rockies to where it once drained into the Gulf of California.

The river provides water to 35 million people in seven states and two countries and to more than 5 million irrigated acres, according to Reclamation. Wyoming, Colorado, Utah, Nevada, California, Arizona and New Mexico have rights to use the river as does Mexico and 29 Indian tribes.

A major drought and overall downward trajectory in rain and snow the last 15 years has left Lake Powell about half-full and Lake Mead below 40 percent, sparking worries about the Upper Basin having to curtail use to deliver water to the Lower Basin.

“Our drought and potential shortages of Colorado River water have everyone talking,” Kathleen Ferris, executive director of Arizona Municipal Water Users Association (AMWUA), wrote in a June 2014 opinion piece published in the Arizona Republic. “That’s good news, because no one seems to pay attention to water issues if a crisis isn’t brewing. But it’s also bad news, because everyone – pundits, politicians and prognosticators – has an opinion, which makes it tough to determine how the pieces fit together so we can see the big picture.”

AMWUA includes the cities of Avondale, Chandler, Glendale, Goodyear, Mesa, Peoria, Phoenix, Scottsdale, Tempe and the town of Gilbert and represents more than 50 percent of the state’s population.

In an interview with Western Water, Ferris said it is necessary to separate the problems of a falling Lake Mead from the long-term outlook for the Colorado River.

“One is an immediate issue; the other is a long range forecast,” she said.

Declining water levels at Lake Powell mean less water for Lake Mead, which officials believe could fall to 1,086 feet above sea level by April 2015. When full, at about 1,200 feet elevation, the lake is the largest reservoir in the United States, capable of holding about 28 million acre-feet of water. Should the lake drop to 1,075 feet, delivery cuts are automatically triggered for Nevada, Arizona and Mexico (through 2017).

There is concern that falling water levels at Lake Powell will diminish its ability to supply water for hydropower generation. Eight generators at Glen Canyon Dam can produce as much as 1,320 megawatts of electricity for the Western power grid.

“While the probability of Lake Powell going below its power pool is low, the consequences are high,” said Jim Lochhead, chief executive officer and manager of Denver Water, in a statement. “Currently there are no contingency plans for such an event. Denver gets half its water supply from the Colorado River so we have a big stake in the future security of the river, not just for ourselves, but for all water users in Colorado. As leaders, we simply cannot wait for a crisis to happen before we come together to figure out how to address it. That would be irresponsible.”

Environmental groups believe the worsening water supply is proof that the river is being pushed to its limit.

“The facts are clear: the demand for water from the Colorado River ex­ceeds the supply,” said a July report by American Rivers, The Hardest Working River in the West: Common-Sense Solu­tions for a Reliable Water Future for the Colorado River Basin. “In addition, the river’s imbalance is wreaking havoc on the West’s natural ecosystems, harming world-class fisheries and unique natural wonders. The ripple effect goes even further, and will impact everything from cost of vegetables to the eroding economic base for the hundreds of communities along the banks of the river, and the entire Western United States.”

This issue of Western Water dis­cusses the aspects of Basin Study work­groups and where possible solutions to the river’s imbalance may come from.

At times, the Salton Sea sits glistening in California’s arid southeast corner where it blossoms into a wildlife haven, with more than 400 bird species flocking to its shores as they rest along the Pacific Flyway or feed on the sea’s fish.

Other times, especially in the heat of summer, the sea can become a stinky deathbed for fish as decomposing algae blooms suck oxygen from the salty water.

No matter what vision one might have of the sea, it sits there slowly shrinking and awaiting an uncertain future as more and more water that once flowed into the sea from surrounding crops is instead transferred to thirsty cities.

Imperial Irrigation District has sought to compel the state, which released a restoration plan for the sea in 2007, to take immediate action to prevent further deterioration. You can read more about this latest move in our “In the News” section. And you can see the Salton Sea for yourself on our upcoming Lower Colorado River Tour March 11-13, which will kick off our 2015 tour schedule that includes our regular outings: The Central Valley (April 22-24), Bay Delta (June 24-26), Northern California (Oct. 21-23) and San Joaquin River Restoration (Nov. 5-6) tours.

We will introduce two new tours in 2015, including one that will tackle the hottest topic in water today: Groundwater. That tour (Sept. 24-25), which will start and end in Sacramento, will cover a glossary of groundwater topics including overdraft and subsidence as well as regional management efforts that have been in the works and new ones compelled by this year’s passage of the Groundwater Sustainability Management Act.

We will also go to my old stomping grounds in Inland Southern California (Oct. 8-9) to learn about groundwater management, and water recycling and other conservation efforts. We plan to visit key infrastructure sites such as Diamond Valley Lake, Metropolitan Water District’s reservoir nestled in the hills above Hemet, and Lake Perris, the southern-most endpoint of the State Water Project.

In early February, we will host another installment of our popular Water 101 workshop, this time in West Sacramento, and again featuring the iconic Lester Snow, the former head of California Department of Water Resources and the state’s former natural resources secretary. The day-and-a-half workshop is valuable for anyone who wants to learn more about the basics of water, water rights, groundwater developments, and to understand how the Legislature deals with water issues.

And last but not least, our 32nd annual Executive Briefing will be held in Sacramento on March 25. As in years past this event will feature top speakers on the most pressing issues in water today, including the drought, the new groundwater law and the next steps of the water bond passed by voters in November. Click here to get more information on our tours and events. There you can also register online and assure yourself a seat.

To read the entire November/December Western Water digital edition, The Next Steps of the Colorado River Basin Study, click here.