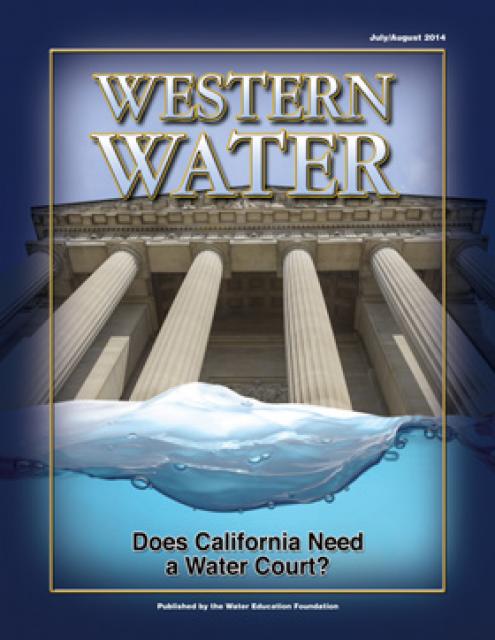 Before attorneys wrangled in courtrooms over questions of water rights, people typically took matters into their own hands. If your neighbor up river was damming water that affected your supply, it wasn’t unheard of that you would simply sneak up in the middle of the night and blow up the dam.

Today, matters are more refined but given the essential nature of water, the passion about water rights remains. After 164 years of statehood, California’s water rights system is established, but that doesn’t mean that questions don’t remain about water rights validity or seniority, a complex and sometimes heated process.

As the battles are fought in and out of the courts, the question is whether California needs a “water court” of some variety to untangle the legal mess that often occurs in water law.

“I think in an ideal world it would be great,” said Art Baggett, who served as the attorney member of the State Water Board from 1999 to 2011. “The challenge during a water rights hearing is the State Water Board is responsible for enforcing the Public Trust Doctrine but at the same time … you are a regulator and an adjudicator and sometimes that conflicts. I found it challenging at times. It’s not as clean as it could be.”

Obstacles to making it happen are the costs of providing for administrative law judges (ALJs) for the State Water Board hearings and the complexity of California’s dual water rights system, which includes riparian/overlying rights and appropriative rights. All water rights are subject to provisions of the California Constitution, which requires all water use to be reasonable and beneficial and in the public interest.

The idea of a water court emerges periodically, in much the same way as superior courts have sections devoted to family law. However, courts generally resist creating new, specialized entities.

“It’s both about water rights and our judicial system,” said Alf Brandt, executive director of Dividing the Waters, a program of the National Judicial College that educates judges about complex water issues. “Our judicial system generally does not have specialty courts.”

“In its broadest articulation the idea [of a water court] is to provide for some specialized mechanism to address the kind of quasi-judicial determinations that the State Board makes [such as] complaints, petitions [and] forfeiture,” he said. “It is simply that adjudicating before a five-member board makes no sense to me.”

The State Water Board’s reliance on staff and the absence of an attorney board member as the hearing officer at the hearing, sometimes results “in a distorted type of hearing that doesn’t resemble anything like due process,” Somach said.

“If you move those to a court with a judge, that judge is not like a board member who may or may not still be on the Board when a decision is made. You also would obtain quasi-judicial determinations and a trial and hearing that make some evidentiary and legal sense,” Somach said.

Andy Sawyer, assistant chief counsel for the State Water Board, said when people talk about a water court, “they often are talking about different things.”

Most western states have a state engineer or water rights board to administer water right permits and conduct statutory adjudications. Colorado has a water court, with seven divisions organized along its major watershed geography. Water referees investigate and make rulings on applications for conditional water rights in available unappropriated water, applications for absolute water rights perfected by actual use, changes of existing water rights and plans for augmentation that provide adequate replacement water to protect senior water rights while also allowing out-of-priority diversion and use by junior rights.

“We have a system that basically promotes settlement early and fashioning a decree in a consensus-building situation before the referee, but any person who protests the referee’s ruling can put the matter in front of the water court for a de novo trial,” said Colorado Supreme Court Justice Gregory Hobbs.

Bart Miller, water program director with Western Resource Advocates in Boulder, said the Colorado system “offers finality as to all interests in a sub-basin,” but finding water for the environment is not always easy.

“It’s hard to find a place for instream values,” he said. “The headwaters have fairly good water rights for instream values but the farther down you get the more difficult it is to ensure environmental flows because there are so many other water interests that come ahead in time and geographically … so you have a lot of dewatered streams.”

The Colorado Water Conservation Board can appropriate instream flow water rights in priority and acquire interests in senior rights to enhance those flows, Hobbs said.

Colorado’s system treats tributary groundwater and surface water as an interconnected resource that is subject to prior appropriation adjudication and administration, something California lacks. Tributary groundwater is water that would be available to a senior surface water right were it not for well pumping that would otherwise be available to that right. Under Colorado law, all groundwater is considered to be tributary to a surface stream unless proved otherwise.

“The biggest disconnect I see is that California doesn’t necessarily take into account the effect of tributary groundwater pumping on surface water rights,” Hobbs said. “That has to result in continuing injury to senior rights holders or instream flow rights in particular stream systems.”

“I think everyone agrees that the water courts system employed in Colorado is very Colorado-specific and it would not apply in California,” she said. “I think the primary reason is Colorado has a very linear system – all water is appropriative. In California, we respect both riparian and appropriative rights.”

Another “dramatic difference,” she said, is that all water in Colorado – both surface and groundwater supplies – is within the state’s jurisdiction.

This issue of Western Water discusses the current system of administering water rights in California and asks the question: Does California need a water court? Answers vary.

Click here to purchase a full copy of this article.

Water in California is complicated; there are no two ways about that.

When I was a reporter covering water in Southern California, it was clear that reporters across the state who developed that specialty often wrote the best stories: Mark Grossi, still of the Fresno Bee; Tom Philp, formerly of the Sacramento Bee and the late Mike Taugher of the Contra Costa Times, among them.

When a general-assignment reporter was roped into covering a water issue, it was often done with little insight and context. Not that they didn’t try but there is a steep learning curve when it comes to water in California, from the plumbing that brings the water to our faucets to the water quality issues that are often measured in parts per billion.

So it might make sense on the surface, with so many key water battles ending up in court, that the judges who render decisions about the life-sustaining resource have an added extra background in water.

Specialty judges are nothing new. After all, there are judges at the state or federal level who only oversee cases involving bankruptcy, family law, probate or juvenile matters. This issue of Western Water looks in-depth at the reasons why and why not to have a water court in California and the differing viewpoints are very insightful.

My own education in water issues really got started with a Western water law class at the University of Colorado, Boulder that was taught by the late David Getches, known as one of the best minds in water law. It continued when I became the water/environmental reporter at the Press-Enterprise in Inland Southern California. While I came to the newspaper with a good understanding of water issues, knowing the local plumbing was another thing. And, as most of us realize, the plumbing is often at the heart of several issues in the water world.

And, of course, I took at tour of the lower Colorado River with the Water Education Foundation that provided me with an unforgettable closeup of the issues at hand on the mighty river.

Working at Best Best & Krieger was an added bonus. There, I edited articles penned by such great water lawyers as Roderick Walston, whose storied career involved a stint as the Interior Department’s acting solicitor and who recently argued the fascinating Scott River case on whether the Public Trust Doctrine can apply to groundwater. And then there was Eric Garner, the BB&K attorney who is like a walking encyclopedia of water rights and who, along with the endearing Art Littleworth, literally wrote the book on water law: California Water.

I’ve been blessed with having these experiences. Yet, I know, there is always more to learn.