Allocating Water in a Time of Scarcity: Is it Time to Reform Water Rights? July/August 2015 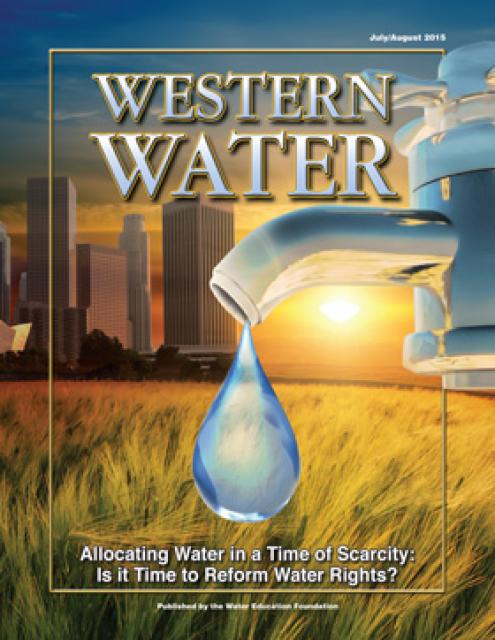 California’s severe drought has put its water rights system under scrutiny, raising the question whether a complete overhaul is necessary to better allocate water use.

California’s severe drought has put its water rights system under scrutiny, raising the question whether a complete overhaul is necessary to better allocate water use.

That process would be a monstrous undertaking and extremely complicated. It would be vigorously opposed by those with long-held water rights who favor the present system and supported by reform advocates believe the time has come for California to join other western states with more defined rights.

Some experts believe it’s time for a change.

“It’s a system that worked reasonably well 20, 50, 100 years ago but the current drought is showing that it is most inadequate to deal with California’s current water challenges,” said Richard M. Frank, professor of environmental practice and director of the California Environmental Law and Policy Center at the University of California, Davis School of Law. “It’s very inflexible in terms of water rights priorities, there is limited recognition of environmental values and environ­mental needs for water and there’s a lack of transparency that is very frus­trating to me and to a lot of observers.”

But to those on the ground, changing the current system is inviting catastrophe and unpredictable results.

“The calls for revisions of water rights are not coming from within the ag community; they are coming from folks who would like to see water go to different purposes,” said Cannon Michael, a Water Education Foundation board member who grows processing tomatoes, fresh market tomatoes, melons, corn, cotton, alfalfa and wheat on 11,000 acres in Merced County. “You don’t hear a call from the ag community saying we want to re-do the water rights system and that is because having some priority to deliver water to ag, especially south of the Delta, is important because we then can work out transfers between neighbors. If the water rights system was revised in California now, it is very likely that existing water rights held by agriculture would be weakened.”

Water rights attorney David Aladjem with Downey Brand in Sacramento believes the current water rights system is stable and fair, as exhibited by the willingness of “major water rights players” to abide by the state’s mandated reductions.

Some water rights holders have been hammered by a drought that may leave them with no water by the end of the summer. In 2015, for the second consecutive year, 2,582 junior water rights holders in the Sacramento River watershed and 219 junior water right holders in the Sacramento-San Joaquin Delta received curtailment notices from the State Water Resources Control Board (State Water Board). The action affects people in the 27,000-square mile Sacramento River watershed, which includes the Pit, Feather and American rivers, and all other portions and tributaries of the watershed.

The State Water Board’s curtailment notice came on the heels of an April 1 Sierra snowpack with a snow water equivalent of 1 to 2 inches – a disconcerting development considering the previous low measurement for April 1 was 27 inches in 1977. Snow water equivalent is the depth of water that would theoretically result if the entire snowpack melted instantaneously.

The city of San Francisco also received the notice based on appropriative water rights it holds on the Tuolumne River dating back to 1903.

Some Delta farmers with riparian water rights in May agreed to a voluntary 25 percent reduction in water use in exchange for not being asked to make further cuts to their supply.

“This proposal helps Delta growers manage the risk of potentially deeper curtailment, while ensuring significant water conservation efforts in this fourth year of drought,” State Water Board Chair Felicia Marcus said in a statement. “It allows participating growers to share in the sacrifice that people throughout the state are facing because of the severe drought, while protecting their economic well-being by giving them some certainty regarding exercise of the State Water Board’s enforcement discretion at the beginning of the planting season.”

However, the State Water Board’s curtailment notice to the West Side Irrigation District, Central Delta Water Agency, South Delta Water Agency and Woods Irrigation Co. was blocked by a Sacramento Superior Court judge July 10 on the basis that the water agencies weren’t given the chance to defend their water before the Board. Five days later, the State Water Board issued a draft cease-and-desist order to the West Side District, which could cost it $10,000 for every day it diverted water from the Old River in San Joaquin County.

Promises of El Niño potentially coming in to save California from this historic drought have dominated the headlines lately, but behind the scenes the question of whether the state’s water rights system should be updated or modified, especially in times of scarcity, are being asked.

There is perhaps nothing more interesting, or more complicated, in California than its water rights system. Some water rights date so far back they were born from merely a note nailed to a tree during the Gold Rush. This unprecedented dry spell, though, has led to curtailments of some of those “senior” water rights, including those belonging to San Francisco, as noted in this issue of Western Water.

The state recently informed the city that it was curtailing four appropriative water rights on the Tuolumne River that were established at the turn of the 20th century.

I recently visited the Tuolumne River on a four-day backpack trip through Hetch Hetchy Valley, curious to see why John Muir and the Sierra Club launched such a ferocious battle against San Francisco, which wanted to bring that water about 180 miles to its residents by damming the river there. Hetch Hetchy Valley, after all, was already part of a national park – Yosemite, no less.

It is said that, in 1901, San Francisco Mayor James Phelan tacked a handwritten notice on an oak tree over the river’s gorge to secure the city’s rights to that water. There was indeed a battle that ensued before Congress. In the end, the city built O’Shaughnessy Dam, creating a 300-foot deep reservoir where the river once snaked through the valley floor.

As we hiked around the dam and along the water’s edge during the Memorial Day weekend storm, it was hard not to notice the bounty of clear water cascading down the canyon walls and into the reservoir. It was enough to make anyone envious of the city’s supply.

Why cities like San Francisco and Los Angeles were built so far from the water source is always curious. That question was pondered long before me. John Wesley Powell, the one-armed Civil War veteran who led daring expeditions down the West’s mighty rivers, testified before the Los Angeles International Irrigation Congress in 1893 and warned that water, or the lack of it, would be a major and growing problem in the nation’s westward expansion.

“I wish to make it clear to you, there is not sufficient water to irrigate all the lands which could be irrigated, and only a small portion can be irrigated…I tell you, gentlemen, you are piling up a heritage of conflict!”

That said, today cities like San Francisco and farmers who grow the food we eat rely on those senior water rights. The water rights are entrenched in our system and, if it comes down to any changes, it will indeed be a battle of epic proportions.