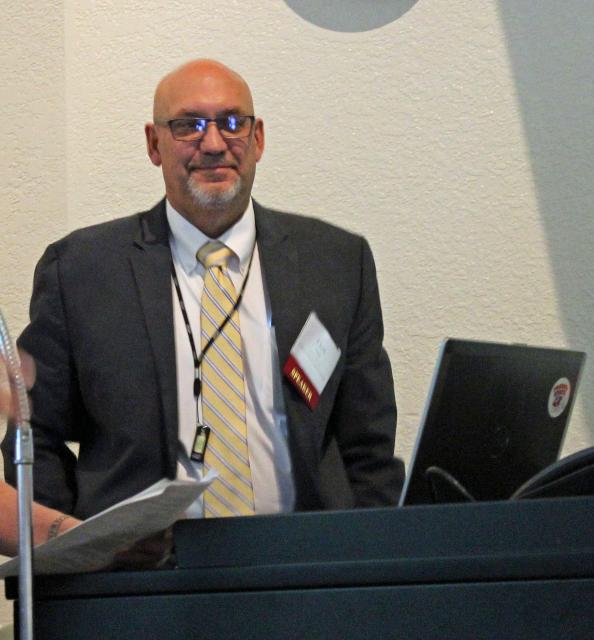 Against a backdrop of widespread subsidence caused by increased groundwater pumping in the San Joaquin Valley, the general manager of one large irrigation district detailed ways growers are teaming with the district to overcome the diminishing groundwater supplies in the heart of California’s bread basket.

Chris White, general manager of the Central California Irrigation District (CCID), talked about the use of groundwater recharge basins on farmland during wet years during a special Aug. 16 briefing sponsored by the California Department of Water Resources and the Water Education Foundation held at Fresno State.

Land subsidence caused by groundwater pumping has been a problem for decades in the San Joaquin Valley. Facing declining surface water allocations and prolonged drought in recent years, growers have pumped more groundwater, resulting in subsidence rates of more than 1 foot a year in some parts of the valley.

CCID, located near Los Banos, serves more than 1,600 farms on more than 143,000 acres. The district is one of four agencies that comprise the San Joaquin River Exchange Contractors. These Central Valley Project water users agreed to not exercise their rights to San Joaquin River water in exchange for using supplies that are exported from the Delta. Even with these water supplies and programs to improve water conservation, groundwater overdraft and land subsidence have been a major issue. The area’s farmland has been hard hit by groundwater overdraft and subsequent land subsidence.

For example, where CCID’s main canal intersects with Russell Avenue, subsidence has lowered the roadway so that canal water no longer flows feet below the bridge but is just inches from the base. The bridge is a strong visual to the effects of subsidence – and it is a $2.5 million issue CCID is addressing by building a replacement bridge with higher clearance. Yet, in addition, subsidence has reduced the flow capacity of the canal by more than half.

White noted there is a lot at stake by not addressing the subsidence problem. Potential impacts in his district include: flooding in Western Madera and Merced counties at Highway 152, the city of Dos Palos and farmland and dairies. In addition, the water supply of neighboring districts are jeopardized – up to 20 percent reduction in water district conveyance capacity. Also, the San Joaquin River Restoration Program could be jeopardized.

Growers adjacent to his district are key to overcoming the challenges, he said, and they have become active in helping to form solutions.

On the 12,000-acre Triangle T Ranch in Los Banos, 530 acres are farmed during dry years. In wet years the property transforms into a recharge basin. Channels direct flood waters to the area where it collects in a basin and percolates down into the aquifer.  That groundwater can, in turn, be pumped out and used when needed. In 2017 – following a very wet winter – about 30,000 acre-feet of water have been recharged, and the groundwater level has risen 60 feet at the recharge area.

In addition, a new pipeline is nearly completed to deliver water from the Poso Canal on one side of the San Joaquin River to landowners on the other side in the Red Top subsidence area and groundwater bank. The pipeline is the first part of the Red Top Subsidence Project, which landowners can use to flood, recapture restoration and transfer water from the facility in lieu of deep well pumping in the area.

White said that district efforts teamed with landowners’ willingness to get involved has, and will continue, to pay off. Subsidence at Red Top has been reduced by 50 percent through management.

“The landowners realize it’s in their best interest to take this into their own hands,” he said.

Click here to view Chris White’s presentation and other PowerPoints from the Aug. 16 event.