Fran Spivy-Weber: “Water, a Past and Future Perspective” 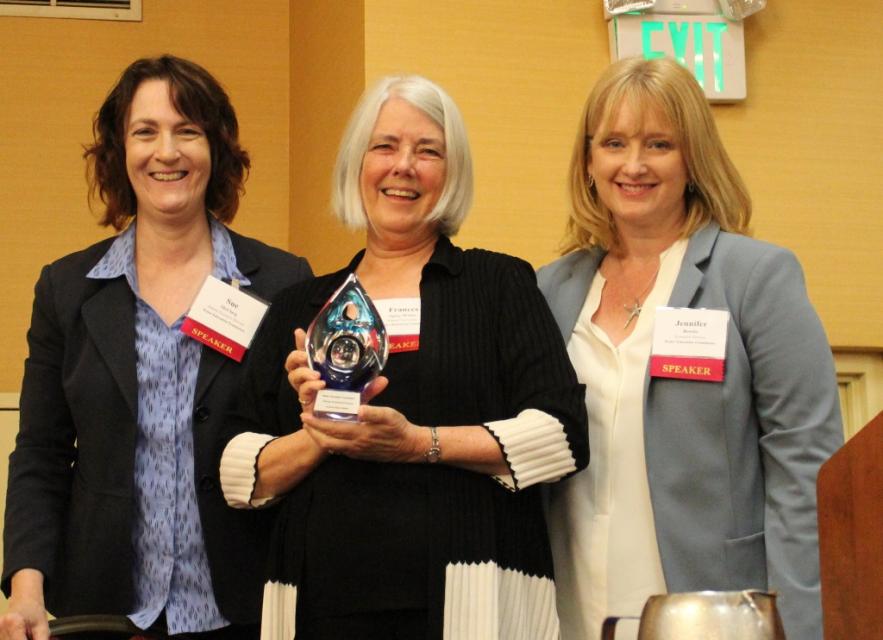 California has entered a “yo-yo” reality, where climate change-driven drought and flooding have become real challenges that will reshape consideration of state water issues. Drought and flood “can’t be taken separately. We need to consider both,” said Fran Spivy-Weber, a stalwart presence for decades in the state’s water world.

Recently retired as vice chair of the State Water Resources Control Board, she made her last public presentation during the Water Education Foundation’s annual Executive Briefing on March 23, offering a retrospective on her esteemed career and providing insight into California’s water future.

Spivy-Weber was appointed to the State Water Board in 2007. Prior to that, she was executive director of the Mono Lake Committee for 10 years. From 1983 to 1992, she was director of international programs for the National Audubon Society. She also had been a member of the Bay-Delta Public Advisory Committee and co-chair of its Water Use Efficiency Committee.

In addition to her jobs, she has served on many boards, including the Water Education Foundation, California Council of Land Trusts, and Clean Water Action/Clean Water Fund, as well as chair of the Public Policy Institute of California’s Water Policy Center Advisory Council.

She put a humble spin on her vast experience, saying it allowed her to “have some perspective to where we’ve been and where we might be going.”

“Climate is the umbrella for everything, and we’re all trying to figure out how that works,” Spivy-Weber said. “With climate change, this will be a yo-yo. What do you do with a yo-yo effect? You don’t go back and forth. You try to find something in the middle, so that’s where conservation and multiple water uses come in.”

She referred to the “One Water” concept gaining momentum across California: “We have come a long, long way. We should be proud of ourselves with the integration that we’ve been able to achieve with recycled water, stormwater, brackish and ocean desalination and grey water. All of these – together what many are calling ‘one water’ – is becoming a future mandate.”

Regions and communities have different needs, and what works well in one area might not be best in another, she said. Where can recycled water be used most efficiently and effectively? Where can stormwater be captured when rain events occur?

“We are moving into a time when I think it’s going to be important to use our knowledge and think through what the consequences are of what we have normally just accepted,” Spivy-Weber said. For example, conservation mostly has been a drought response. In the future, it is likely that it is going to be “a leveling response – a response that gives us a little bit of buffer on the high sides and the low sides.”

Turning to the Gov. Brown’s California Water Action Plan that lists 10 steps toward sustainable water management, she summarized, “as you can see with that list, it’s not just one agency or two agencies or one stakeholder group or two stakeholder groups, it really is a community. The plan has been very influential in bringing agencies and stakeholders together. And I think we’ll see more of that in the future.”