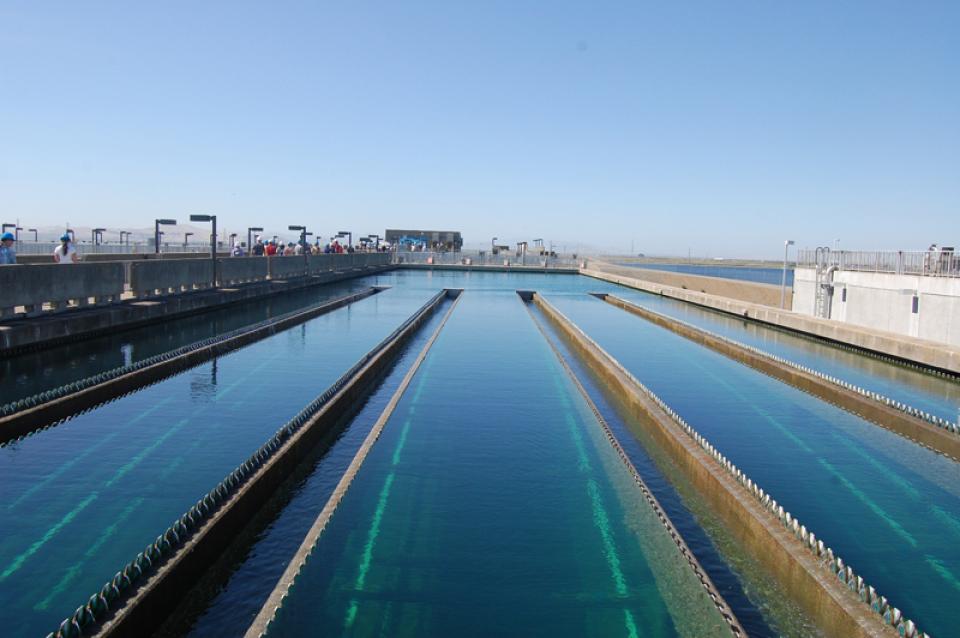 A tremendous amount of time and technology is expended to make surface water safe to drink. Surface water undergoes many processes before it reaches a consumer’s tap.

When water enters a treatment plant [see also Water Treatment], the first step is coagulation, the rapid mixing of coagulants such as aluminum sulfate, ferric chloride and organic polymers into the water. This alters electrical charges surrounding the suspended, undesirable particles to make them attract and coagulate, or clump together, into larger particles known as flocs.

The next step is flocculation: water is gently agitated so the flocs or particles will collide with each other, stick together and entrap other suspended particles, forming larger, heavier particles that will settle out in the next step.

In the sedimentation phase, the flocculated water moves slowly through a basin or tank to allow the heavy floc particles to settle to the bottom, so they may be removed.

Water is passed through a filter made of sand, coal particles or similar materials that removes particles such as silt, other very fine solids, and some pathogens not settled in the sedimentation process. Filtration further reduces turbidity and results in water that is crystal clear.

Activated carbon also may be used to remove chemical contaminants. Rather than being trapped in the small passageways between grains of sand, contaminants stick to the surface of carbon and are removed, a process known as carbon adsorption.

At the disinfection stage, chlorine, chloramines, ozone or other disinfectants are added to the water to destroy potentially harmful germs such as bacteria, viruses, parasites and other organisms. During the treatment process, an effort is made to add enough disinfectant to leave a residual amount in the water to continue to kill any pathogens in the pipelines that convey the water to users.

Because chlorine produces disinfection byproducts that are suspected to cause cancer, ozone, chlorine dioxide and ultraviolet light are being evaluated and tested to determine their effectiveness as a replacement for chlorine. However, there are byproducts of some of these alternative disinfectants that also are potential health risks, leaving drinking water suppliers and consumers in a dilemma.

Aeration, the mixture of air with water, sometimes is used if undesirable amounts of iron and manganese are present; the elements remain in solution in water in the absence of oxygen. Aeration is done primarily to improve the aesthetics of water: color, taste and odor.

In some systems, fluoride is added to reduce tooth decay. California law requires fluoridation of water in systems with 10,000 or more connections. State officials say 30 percent of all public water providers in California fluoridate their water.

Other chemicals may be added to water during the course of treatment for specific purposes. Caustic soda or lime, for example, may be added for corrosion control. [See also groundwater treatment.]

In California, treatment rules require water systems to filter all surface water and certain groundwater supplies to remove infectious disease-causing microbes, unless the water supplier can show that the water supply is not exposed to such contaminants. [See also Water Quality.]