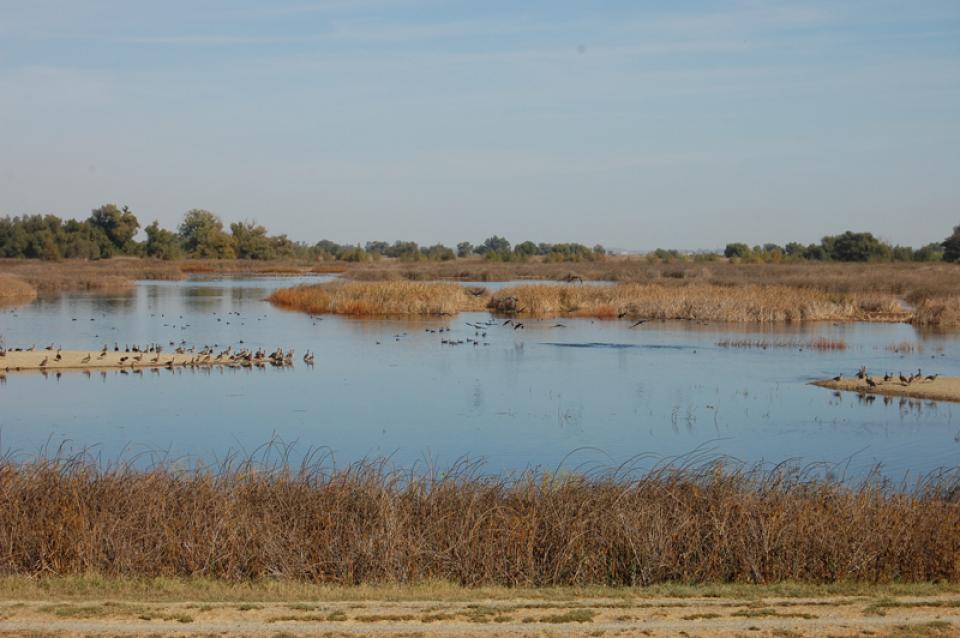 In the Central Valley, wetlands—partly or seasonally saturated land that supports aquatic life and distinct ecosystems— provide critical habitat for a variety of wildlife.

However, water flows essential to sustaining these wetland ecosystems have been altered by many water and land use projects including the Central Valley Project (CVP). Built by the federal government more than 60 years ago, the CVP aimed to control floods and provide water primarily for irrigation and urban water uses through one of the largest water storage and transport systems in the world.

Although the project helped spark California’s economic development and limited flooding, critics contended the CVP contributed to the decline of anadromous fish species, and caused other environmental damage.

Over time, the Central Valley has lost 90 percent of its wetlands.

In response, the Central Valley Project Improvement Act (CVPIA) was launched in the 1990s to address such concerns.  As part of the CVPIA, water supplies increased for 19 state, federal and privately owned wildlife refuges in the Central Valley.

Since then, this reliable source of year-round water and related biological benefits has helped support more than 100 bird species dependent on wetlands. Habitat is now available during August and early September and benefits early migrant waterfowl and shorebirds. Habitat also is provided for resident wildlife and their young during a critical time of the year when wetland habitat can be particularly limited by hydrology.

Additionally, water supplied for semi-permanent and permanent wetland habitat in spring and summer has directly benefited the recovery of special-status species, such as the giant garter snake.

Still, controversy continues over how to address the needs of agriculture and provide water for a huge populous while sustaining the environment. Much of the concern is focused on the Sacramento San Joaquin Delta the hub of the California’s water system, through which the majority of the water flows to the CVP and State Water Project.  Adding to the challenges are drought conditions and climate change, which will likely alter water availability and flow patterns as the Sierra Nevada sees less snow and more precipitation during winter and an earlier snowmelt in spring.