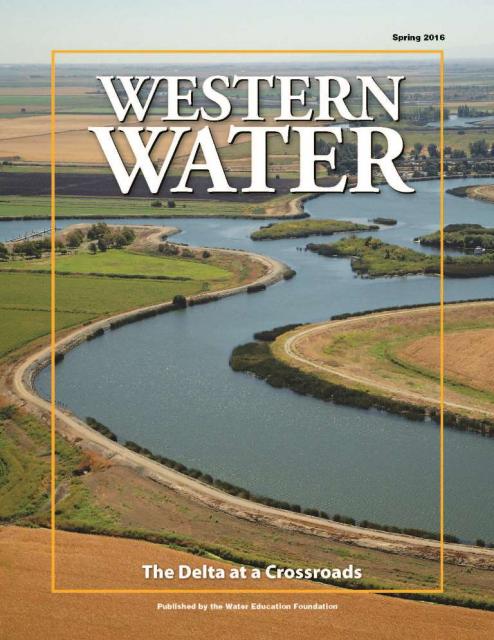 In the Spring 2016 issue of the Water Education Foundation’s Western Water, Writer Gary Pitzer delves into the dilemma of balancing needs for the economy and the environ­ment in the Sacramento-San Joaquin Delta and the impor­tance of transporting water to the south.

Pitzer discusses the California WaterFix, a $15 billion plan supported by the state of California and the federal government that would involve a major re-working of the Delta plumbing system.

At the heart of the plan are three intakes in the northern Delta on the Sacramento River that would feed twin tunnels – 40 feet wide, 39 miles long and 150 feet under­ground. The tunnels would transport water under the Delta to the existing state and federal pumping facilities in the southern Delta near Tracy to be transported hundreds of miles to homes in the Bay Area and Southern California and to farm fields in the San Joaquin Valley via the State Water Project (SWP) and the federal Central Valley Project (CVP).

The proposed project is not without its critics and hurdles. The article explores Gov. Jerry Brown’s resolve to construct the tunnels, proposed legislation that would require ballot-box approval, the pending water rights hearing for the tunnels’ intake and water users’ frustration over reduced Delta exports despite the improved precipi­tation in early 2016 following several years of drought.

Read the excerpt from this issue. You can also subscribe to a print or digital, interactive version of our quarterly magazine.