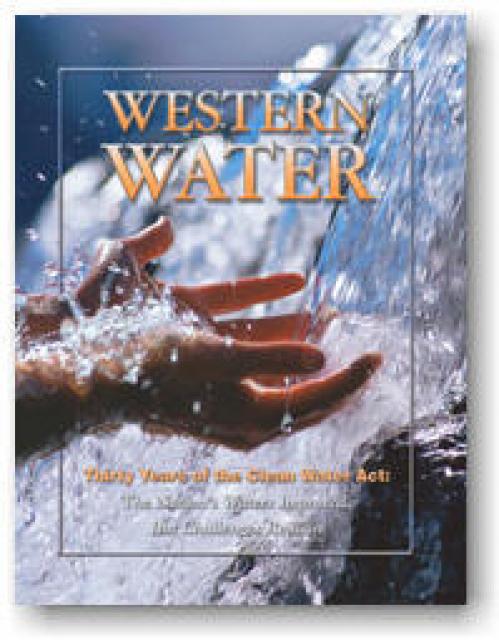 This year marks the 30th anniversary of one of the most significant environmental laws in American history, the Clean Water Act (CWA). The law that emerged from the consensus and compromise that characterizes the legislative process has had remarkable success, reversing years of neglect and outright abuse of the nation’s waters.

In 1972, only 30 to 40 percent of the nation’s rivers, lakes and coastal waters were estimated to be safe for swimming and fishing. Decades of pollution dumping had rendered several high-profile waterways uninhabitable for aquatic life. Lake Erie was literally dying, the Potomac River in Washington, D.C., was choking under algae blooms and in perhaps the most vivid display of all, Cleveland’s oil-soaked Cuyahoga River caught fire in 1969. In other rivers throughout the nation, the problems were as visible as the open sewage that often washed ashore.

Although the federal government had putative authority over the nation’s waterways prior to the CWA, it was clear by 1972 that stricter measures were necessary to reverse the onslaught of pollution discharges. The Federal Water Pollution Control Act, otherwise known as the CWA, declared the intent to “restore and maintain the chemical, physical and biological integrity of the nation’s waters.” The details of that process were controversial, and it was only after Congress overrode a presidential veto that the CWA became law.

“Overall, we’re in much better shape than we were in the 1970s, and the Clean Water Act is the primary reason that’s the case,” said Tom Howard, deputy director of the California State Water Resources Control Board (State Board). “That doesn’t mean we’ve realized the goals we hoped to achieve.”

The CWA set two goals that underlie the mission of federal and state regulatory officials: the elimination of pollutant discharges into navigable waters by 1985 and fishable and swimmable waters by 1983. Environmentalists say public interest compels everyone in society, not just regulators and the regulated, to strive for the attainment of the twin goals.

“We need to keep the end of ‘fishable, swimmable’ in mind,” said Marguerite Young, California director of Clean Water Action. “Implementation of the law has become more accepting of some level of pollution. It makes more sense to talk about ways to prevent pollution in the first place.”

But the effort to attain cleaner water is fraught with complexity. Trying to balance pollution prevention against the backdrop of daily human activity in 21st century America inevitably forces the resolution of thorny and controversial issues that have the potential to cause significant impacts on people in urban and rural settings.

Meanwhile, the pressure to develop new water supplies throughout the West is predicated on the quality of new water sources. “Water quality and rights are beginning to merge,” said Roger Pearson, editor in chief of California Environmental Insider, at an August legal conference on the CWA in Los Angeles. “It’s increasingly impossible to deal with rights without water quality.”

Despite these issues, the CWA’s achievements have been noteworthy. To stem the flow of unregulated pollutants, cities have spent tens of billions of dollars on wastewater treatment plants that are required to meet effluent standards spelled out in discharge permits. The reduction of toxic flows has dramatically improved the health of rivers and lakes, as has the regulation of pollution from nonpoint sources such as city streets and farmland.

But segments of the nation’s waters do not meet water quality standards. A 2002 House resolution commemorating the CWA notes that “serious water pollution problems persist throughout the Nation and significant challenges lie ahead” in protecting waters from pollution. Activists strive for more vigorous enforcement of the law, and stress that a strong federal role is required to ensure consistent application of the CWA nationwide. Concerns have been raised that the Bush administration is inclined to frame the law around less federal responsibility and more flexibility for states and point source dischargers.

Those in the regulated community say it is not their aim to roll back the CWA, but rather to attain a clearer notion of its mechanisms so that resources can be put to use in the most efficient manner. Scientists agree that the process of determining ambient water quality and the manner in which pollutants cause detriment is complicated and constantly evolving as new research unfolds.

“While actual water quality conditions may remain static in a water body, its assessed condition may change due to new standards,” states a 2002 report produced jointly by the California Environmental Protection Agency and the Resources Agency. “Advances in the understanding of the impacts of pollutants on human health and the environment, as well as improvements in assessment technology and monitoring, may result in changes in the standards of assessment.”

Assigning reductions to nonpoint sources of pollutants such as sediment, bacteria and nutrients are controversial and, according to some, inordinately expensive. However, it is a natural course of progression because of the improvements in water quality that have been achieved through end-of-pipe treatment. “The low-hanging fruit of low-cost, high-volume point source reductions has largely been harvested,” states a 2001 report by Resources for the Future, a Washington, D.C., think tank. “Today, significant water quality improvement implies the expansion of controls to nonpoint sources of pollution.”

That expansion of control has caused controversy in California, where local officials in Los Angeles, Santa Ana, San Diego and San Francisco have appealed municipal stormwater permits that are viewed as infringing on local land use. The case highlights the argument over the costs of environmental compliance, and the extent to which rules that are designed to provide for the greater public benefit (i.e. clean water) collide with practical, scientifically proven regulatory policy.

Meanwhile, other aspects of the clean water universe such as toxic pollutants, contaminated sediment, thermal pollution and vessel sewage linger on the periphery, keeping the attention of potentially liable parties. More and more, the linkage between the CWA and safe drinking water has become evident.

This issue of Western Water examines the Clean Water Act upon its 30th anniversary, and the debate that continues to swirl around its implementation. Included is a discussion of the challenge of cleaning up nonpoint pollutant sources, how regulators in California are attempting to mitigate the effects of agricultural runoff, the growing nexus between water quality and water supply and the current efforts to more clearly define the law’s linchpin of navigable waters.

NOTE: A complete copy of the 20-page magazine is available from the Foundation for $3. Visit our Products Page and add the November/December 2002 issue of Western Water to your shopping cart.

I guess you might call it a “Busman’s holiday.” During a hiking vacation in southern France, I had the opportunity to see an impressive water infrastructure – not a modern structure but one built over 2,000 years ago. Pont du Gard is an aqueduct and bridge that was a major feat of Roman engineering in a providence far from the Empire’s capital city. It was the key link in a 31-mile aqueduct, parts of which were underground, carrying fresh water from springs at Uzes to Nimes, France. The Romans said it was their best testimony to the greatness of the Roman Empire and at 160 feet it was the highest aqueduct they ever built. It was in continuous use for 400 to 500 years. The bridge is comprised of three tiers of continuous arches. Some of the stones weigh about six tons. So even though it was said that all roads led to Rome, the genius of the leaders of the Empire was that they brought water that led to Rome and to the far reaches of their Empire.

I’m mentioning this because our trip was close to the 30th anniversary of the Clean Water Act – one of America’s greatest efforts to clean up our country’s water. The road to the Clean Water Act, the progress we made during the last 30 years, and the challenges to meet the overdue pledge to make our waters fishable and swimmable are profiled in this issue of Western Water by Writer Gary Pitzer.

This important act was referred to in an interesting way during a recent episode of the West Wing television program. A key advisor asks President Bartlett if he knows when Congress passed the Clean Water Act. The president says he doesn’t have a clue. Then President Bartlett’s young scheduling aide says he is studying those environmental laws in a course on current American history. The President comments that’s why contemporary history is often boring. To learn the great lessons from history, President Bartlett says, you must study the Greeks and Romans. Well, the Romans couldn’t know about the Clean Water Act, but 2,000 years ago they knew how to deliver clean water.

The Water Education Foundation wants to bring the next generation into our goal of clean water. It’s great to see kids celebrating the 30th anniversary of this act in local communities by doing lots of water testing of their neighborhood streams.

Someone who does understand that young people will be the future leaders in water is our former Foundation president, Bill Gianelli. I shouldn’t have been surprised when the former director of the California Department of Water Resources and former head of the Corps of Engineers recently gave a very generous and major endowment to our Water Leaders Class.  Now in its sixth year, the class is structured for young professionals to learn about issues by being mentored by key people in the agricultural, environmental and urban water worlds. Visit our web site, www.watereducation.org, or call, 916-444-6240, to learn more about the class and receive an application form. Applications close Nov. 30.

As westerners prepare for the arrival of what is hoped to be a wet winter, officials have closed the books on a very dry 2002 for most of the Colorado River Basin. Communities from Colorado to San Diego saw next to nothing in precipitation, pushing some areas into crisis mode. All of Colorado’s 64 counties were declared federal disaster areas for purposes of drought relief, while Los Angeles and San Diego received record low rainfall.

Help may be on the way, however, if stronger El Nino conditions help push storm fronts into the region. “Anything could happen, because next year’s runoff depends mainly on future weather,” said Pierre Stephens, lead water supply forecaster for the California Department of Water Resources (DWR).

Despite the extremely dry conditions, southern California residents did not experience water shortages because of adequate surface storage and aggressive conservation measures. However, in Orange County, officials are grappling with a groundwater basin overdrafted by more than 400,000 acre-feet. The overdraft, which is about 200,000 acre-feet more than the target overdraft level, was caused by three years of dry conditions that did not refill the basin, according to the Orange County Water District.

Officials are looking to reduce the amount of groundwater used in the north central part of the county, refill the basin and develop a “zero-based” management strategy that links the amount of future groundwater use with guaranteed available water and the ability to inject that water into deep aquifers.

“In recent times, we did whatever we could to provide 75 percent of the north central cities’ water supplies from the groundwater basin,” said district president Jerry A. King, in a press release. “Annual pumping has increased today to the point that we must back off providing 75 percent of the supply until we can improve our ability to acquire new water and build facilities to put water into the ground.”

Increased surface storage capacity in southern California means water rationing would not be necessary, even if dry conditions persist, according to the Metropolitan Water District. Officials there credit reclamation, conservation, and targeted groundwater use as examples of the district’s dry-year water transfer program. However, for areas that depend on imported water from the Colorado River, continued drought conditions in the Rockies and the Colorado River Basin could cause problems would have a “negative effect” on storage in Lakes Powell and Mead, according to DWR.