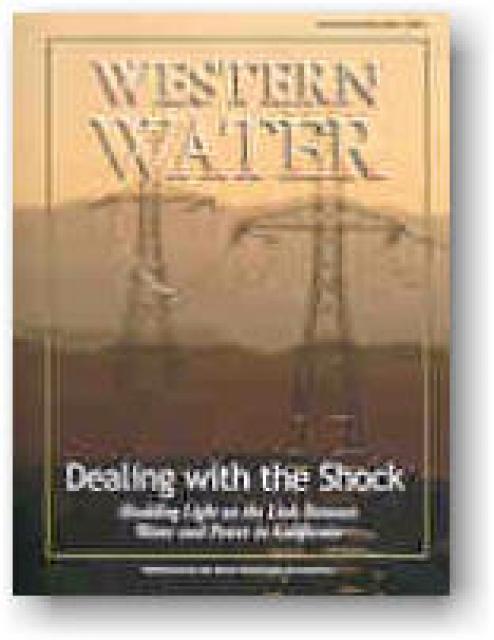 Those on the California water insider track know all too well the fine line the state walks with regard to maintaining its water supply. Hydrologic conditions put California at the mercy of the weather and some are predicting this year could be the start of a dry cycle not just for the state, but the Southwest as a whole. Combine that with a regional dry spell in the Northwest and California’s power woes, and a potential recipe for disaster begins to solidify.

In 1996, power deregulation in California became reality. Legislation was passed that year that required the state’s three largest investor owned utilities, Pacific Gas and Electric Co. (PG&E), San Diego Gas & Electric and Southern California Edison (Edison), to purchase power on the open market through the California Power Exchange – a now defunct group. Competition was supposed to give rise to lower power prices for consumers. But by April 2001, PG&E ended up filing for Chapter 11 when purchasing power became too expensive and the company was not allowed to pass those increased expenditures onto customers under the 1996 law that started deregulation.

Though this year started off rocky with rolling blackouts predicted to sweep the state this summer, recent commotion in the power spectrum seems to have settled down – in June, July and August. But how does all of this relate to water?

There is no doubt that California is very dependent on hydroelectric energy to supplement its supply. According to the California Energy Commission (CEC), on average, hydroelectric power generation constitutes between 10 and 27 percent of California’s annual energy supply, depending on what type of water year the region is experiencing. California has 386 hydropower facilities capable of producing about 14,100 megawatts (MW) of electricity – the second largest source of power supply for the state after oil/gas thermal generating units. Comparatively, the Pacific Northwest’s 314 hydro plants produce close to 32,000 MW of electricity – a source for about 10 percent of California’s overall electricity supply.

To top it off, the power crunch has come at an inopportune time in the state’s water cycle.

Statistics show that hydroelectric generation during the early 1990s, when the state suffered several dry years in a row, produced under 30,000 megawatt-hours (MWh) of electricity, compared with the last five wet years where hydro produced as much as 50,000 MWh annually. Water also is needed, though in not nearly as great of quantities, to cool the steam turbines (oil/gas/nuclear) at thermal generating facilities – the source for the majority of energy produced within California.

A July report issued by the CEC entitled Environmental Performance Report of California’s Electric Generation Facilities states that “competition for the state’s limited fresh water supplies is increasing and demand may exceed supply by 2020,” indicating a potential for problems in thermal energy generation as well.

“From a statewide perspective, water is a scarce resource,” said Joe O’Hagan, a specialist with the CEC, the organization that licenses new power facilities in the state. “Add this to the power crunch and you get a lot of people’s attention.”

Increased emphasis on water supply solutions, like conjunctive use and water marketing, also could present problems if the energy needed to physically implement them is unavailable or too expensive.

But given all the doom and gloom predictions of days-on-end rolling blackouts, California has yet to experience one “Stage 3 Emergency” day this summer. Interestingly, nationwide, California ranks 47th in terms of its per-capita electricity use. The state cut energy use by 12 percent in June, or by about 5,500 MW, while adding about 1,500 MW of new power to the grid by building new generating plants. Despite the reprieve from blackouts thus far, the potential for a crisis is still at hand.

“We’ve had an extraordinarily, and fortunately, cool summer so far,” said Steven Macaulay, chief deputy director for DWR. “But if we have a bunch of hot days, we could be on the edge again.” This issue of Western Water examines the interrelation between power and water in California. Is the potential for the state’s darkest hour impacting water management?

What is a Megawatt?

A megawatt (MW) is a term used to describe the rate or capacity of electrical generation, as cubic-feet-per-second is to water. One MW is enough capacity for about 1,000 homes. A megawatt-hour (MWh) is generating one MW for an hour i.e. a 100 MW generator, generating for one hour, would produce 100 MWh.

A simple formula for converting power is:

California uses on average 30,200 MW of generation each day.

NOTE: A complete copy of this 16-page magazine is available from the Foundation for $3. Visit our on-line store and add the September/October 2001 issue of Western Water to your shopping cart. Or, contact us by phone at 916-444-6240.

This issue of Western Water was prompted by your questions and comments about how water in California is connected to the state’s energy crisis. I think you will find some interesting facts and figures about how much hydropower Californians use. Today it’s 10 to 27 percent depending on the water year. However, in the days before World War II, almost all our power, over 90 percent, came from hydroelectric generation! In case we are headed into a series of dry years – like this one – it’s good to see just how much we can depend on our hydroelectric resources to get us through the power crunch. Also since most of the scientists seem to agree that we will be affected by global warming, we may need to move fairly rapidly to re-operate our hydro systems to capture and utilize more of the earlier, warm runoff. Remember it was a “pineapple express” that hit the state in 1997 causing devastating north state floods. Writer Josh Newcom did a good job on a tough story.

The story of water in the Klamath Basin continues to be in the news. The Foundation has updated our documentary, Watercolors starring Larry Hagman, to reflect the current tense situation. Events have been fast moving since April when the U.S. Bureau of Reclamation shut off water it had been delivering to farmers for about 90 years. Drought caught up with this over allocated and over taxed basin - a land in which farmers, tribes, marshland refuges and downstream salmon fishermen vie for the resource. (The refuges are the last in priority to get the water.) When we filmed our PBS documentary in 2000, it seemed that some basin stakeholders were working together to find solutions. But that was a wet year, and now it’s a dry year. It makes all the difference. Look for the updated version of Watercolors this fall on many public television stations.

The Salton Sea is another place of conflict affecting the Western water situation. (See In the News on the facing page.) We are beginning a documentary on the sea with actor Val Kilmer – he’s starring in a murder mystery film in January called The Salton Sea – and he graciously agreed to narrate this program. He told me he made a spiritual connection with the sea while filming the movie.

So Val, crew and I spent a 110-degree July day filming at the sea. As Val says in the opening scenes, “It’s a harsh and unforgiving place but sometimes it has an almost magical quality and it’s critically important to millions of people.” Created by a canal break in 1905 that sent Colorado River water rushing into an ancient lakebed, the sea today plays a part in a water agreement between area agriculture and southern California cities. Conservation in the fields of the desert valley could free up supplies for a major water transfer to San Diego. The Salton Sea is also an important bird refuge, productive fishery, and agricultural water collection point. And there are plans to bring back the area as a vacation mecca. Increased salinity is one of the biggest problems facing the sea’s many uses.

We expect the Salton Sea program to air on PBS early next year. Check out future copies of Western Water and this website for more information on these and other documentaries.

There’s a lot riding on the ability of California to reduce its consumption of the Colorado River back to 4.4 million acre-feet. Dozens of agreements between the parties that use the river’s water in arid southern California, as well as an agreement between California and the other six states using the river, have been developed on the premise of reducing use. But all of the agreements won’t be worth the paper they are written on unless environmental compliance on the reduction plan can be met – and at ground zero stands the Salton Sea.

For years the sea has struggled with a number of issues ranging from eutrophication of its waters to bird and fish die-offs from disease. The biggest problem the sea may be facing is ever increasing salinity due to no outlet and high evaporation rates. As it stands now, the sea is on the cusp of sliding into hyper-saline, at which point scientists say its productive fishery – food supply to many species of birds – will cease.

As of yet, no preferred alternative has been released on how to “fix” the sea. A trial period using evaporation ponds is underway to ascertain restoring the sea by reducing salt loads. According to plans, each of the solar ponds (between five and eight are thought to be needed) will cover 4.4 square miles and process 17,000 acre-feet of water annually – removing 1 million tons of salt. What would be done with the salt left behind in the evaporation ponds is a question yet to be answered. A pilot project studying an enhanced evaporation system using snow blowers was halted in July after the potential solution was deemed too expensive.

There has been talk of placing some of the evaporation ponds on 8 percent of abutting Imperial Irrigation District (IID) farmland - about 40,000 acres. Consequently, water normally used to irrigate the land could be used to freshen the Salton Sea, but the third-party impacts of doing so are unknown for certain. Additionally, the transfer agreement between IID and the San Diego County Water Authority (San Diego) for up to 300,000 acre-feet of water contains language prohibiting the fallowing of any IID farmland. Without an influx of new water, conserved tail water used for the IID/San Diego transfer (an estimated 14 percent of Imperial Valley runoff) will accelerate the sea’s already high salt load.

Additional unknowns exist as well. Who is going to pay for the sea’s restoration? And how much is it going to cost? Over $10 million in research and development for a solution have been spent by state and federal entities already. Some estimates of total costs to restore the sea have reached beyond the $1 billion mark.

In the transfer agreement between San Diego and IID, language also limits IID from having to spend more than $15 million towards environmental mitigation resulting from the transfer. IID officials have admitted they expect environmental costs resulting from the water transfer to exceed $15 million although they haven’t indicated that they will back out of the transfer agreement. The key terms for the quantification settlement signed by the major water users in southern California and the state effectively delineates water use among the major agencies and districts. It also indicates users like Coachella Valley Water District and Metropolitan Water District of Southern California could help foot the bill for the environmental costs associated with the IID/San Diego transfer.

Rep. Duncan Hunter (R-Alpine) recently introduced legislation (H.R. 2764) into Congress that would provide $60 million towards “Habitat Enhancement Projects,” but would cap the amount of money to be used towards environmental claims under the Endangered Species Act – effectively placing limitations on the possibility of environmental lawsuits relating to the transfer. The bill also includes $53 million towards building two reservoirs, totaling about 11,000 acre-feet, on IID land.