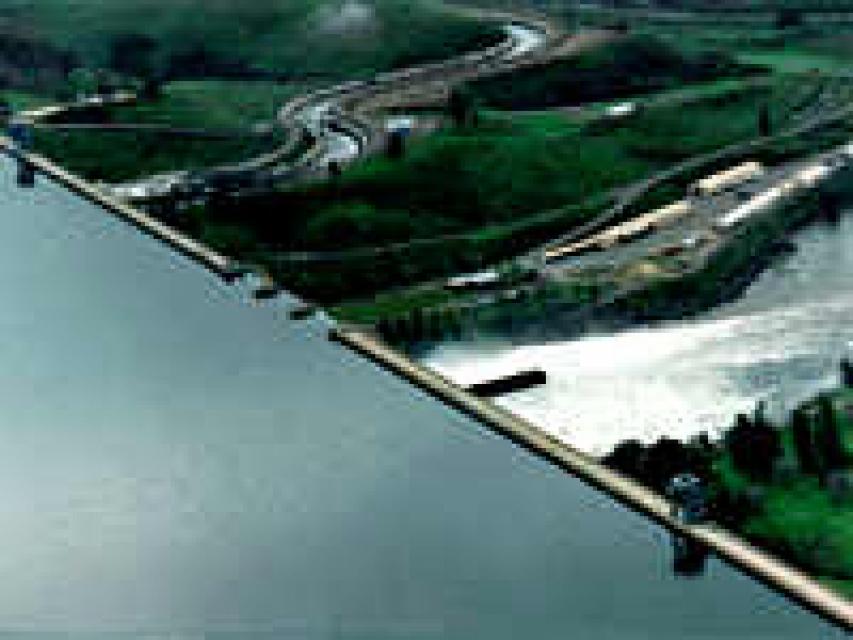 For many of us in northern California, some of the hope and optimism that fills each New Year’s eve was shattered on New Year’s Day 1997 when rain from a series of huge tropical storms began dumping what would eventually be a total of 25 inches of rain over the region in eight days. People were riveted to their televisions as the disaster, which took 9 lives, unfolded.

Just after the new year, my daughter, Suzanne, and I took the train from Sacramento to the Bay Area. Although the track was a couple of feet above water, it seemed like our train was engulfed in a vast sea as we crossed over the Sacramento River bypass system. Not since the memorable storm of 1986 have I seen so much water in the river and bypass system. When I got back to the office, the staff agreed we needed to focus the next Western Water on the continuing flooding. While the media coverage of the immediate disaster was excellent, we believed it was not to early to bring some perspective to the issue of flooding. Since this flood affected the entire Sacramento-San Joaquin river system, we wanted to look at questions of flood control responsibility, repair costs, and ideas for future flood management design.

Since timing is everything, we knew this flooding could provide the Foundation with the opportunity for the “teachable moment” for the public. Therefore we also began work also on “Flood Warning” a public television documentary. With the assistance of a local commercial television station and many other partners, we were able to produce this dramatic special – now available on video, with a viewer’s guide edited by Valerie Holcomb. It was certainly a challenge for me to limit the program to 25 minutes, including credits! (See page 14 to order the video.) Also undergoing an immediate update is our Layperson’s Guide to Flood Management, an important background piece.

This was certainly a baptism by immersion for our new writer, Elizabeth McCarthy. Fortunately her years of covering water and the environment for the Bureau of National Affairs helped her to keep up the fast pace on the magazine. Sue McClurg lent her expertise while she raced to complete her report deadline for the Western Water Policy Review Advisory Commission. In all the discussions, we keep coming back to the issue of land use planning. Remember, the native Indians first warned the ‘49ers how the Central Valley became an inland sea each winter. While it’s too late to strictly heed their warning, many of the experts agree that our rivers, especially the San Joaquin, need more breathing room. One thing seems certain, unexpected storms will continue to hit the West, and we must continue to find ways to cope and prepare for the next big one.

President Bill Clinton’s proposed 1998 budget announced Feb. 6 included $44.7 million for federal levee restoration projects along the Sacramento and American rivers. Clinton asked Congress to authorize the full $44.7 million this year to expedite levee repairs and upgrades. The funding was in response to the near disastrous 1986 American River watershed floods.

Also included in the president’s budget, which will be debated by Congress over the next few months, was $143 million for restoration of the Sacramento and San Joaquin Delta to support the CALFED Bay-Delta Program. Deputy Interior Secretary John Garamendi said, “We are strongly committed to fulfilling the federal share of restoring” the San Francisco Bay-Delta.

The federal money will help fund the 1996 Safe, Clean, Reliable Water Supply Act (Proposition 204), which authorized $995 million to improve Bay-Delta water supply, water quality and environmental restoration. Part of the funds will be used for habitat restoration on levees. Money also could be used to repair levees broken during the Jan. 1997 flooding, particularly along the Cosumnes River. Clinton is seeking a further $286 million for 1999 and 2000.

Prior to the release of 1998 fiscal blueprint, Rep. Vic Fazio, D-Woodland, requested an emergency appropriations measure to increase federal funding for the 1997 flood recovery efforts.

State legislators also took steps to assist with storm recovery. A number of bills were introduced in January and are now under debate in the Legislature, which range from bond measures to fund the construction of additional dams to bills reallocating federal and local governments flood protection and disaster relief cost-sharing programs.

Perspective on the New Year’s Floods

With the new year came the second most devastating flood of the century. The unusual series of back-to-back warm storms, known as the Pineapple Express, that hit northern and central California at the end of 1996 and beginning of 1997 caused the worst flood in the state since 1955. The New Year’s storm killed nine people, forced the evacuation of 120,000 people and caused as much as $2 billion dollars worth of damage. For weeks after the storm the San Joaquin River and its tributaries continued to flood. The havoc wreaked by the epic storm, which was aggravated by downpours three weeks later, raised many questions — from technical to philosophical — about the safety of the state’s flood management system and land use planning.

Unprecedented inflows from rainfall that pounded the area from Dec. 26 – Jan. 6 combined with melted snowpack and surged into Oroville Dam on the Feather River, New Don Pedro Dam on the Tuolumne River, Friant Dam on the San Joaquin River, Shasta Dam on the Sacramento River, Folsom Dam on the American River, New Melones on the Stanislaus River and into Camanche Reservoir on the Mokelumne River. Federal, state and local flood managers were forced to release record outflows from the reservoirs to avoid uncontrolled spills. Raging flows strained numerous levees past the breaking point along the Feather, Bear, and Yuba rivers, Sutter Bypass, and San Joaquin river as well as along the undammed Cosumnes River. Communities in Olivehurst, Linda, Arboga, Wilton, Manteca and Modesto were flooded. Some levees were breached by flood control operators to avoid greater flood damage.

By the end of January, 48 counties out of the state’s 58 counties were declared disaster areas and 290 square miles of property, which included homes, farm land, bridges, roads and flood management infrastructure were damaged. “This was unlike anything we have seen before,” said Turlock Irrigation District (TID) spokesperson Tony Walker.

The agencies responsible for flood management — the U.S. Army Corps of Engineers (Corps), U.S. Bureau of Reclamation (Bureau), state Department of Water Resources (DWR), state Reclamation Board, and Office of Emergency Services (OES), received wide praise for their flood control efforts, which in several areas was made more difficult because warm rain melted an above average snowpack. The state and federal water projects “worked when it mattered most, and millions of people still have their homes and businesses today as a result,” said Stephen Hall, executive director of the Association of California Water Agencies.

Flood control officials pointed out that flood damage was minimized because of the government’s accurate weather forecasting and operational changes made after the near catastrophic flood in 1986 along the Sacramento and American rivers. Two days before the full force of the Pineapple Express was unleashed, the State-Federal Flood Center alerted flood management agencies and dam operators increased releases of stored water to make room for inflow from the subtropical storms. The forecast predicted that 40 inches of rain would fall at the upper elevation of the Feather River watershed, predictions that were within 1 inch of the actual downpour, said Lowell Ploss, chief of Central Valley Project (CVP) operations.

Following the 1986 inundation, seasonal flood storage capacity was increased at Folsom Dam. The 1986 flood caused record flows on the American and lower Sacramento rivers and claimed 15 lives and caused more than $1.5 billion in property damage in the Central Valley. Other record floods in this century occurred in 1955, 1964 and 1995. Because of the state’s diverse microclimate and geography, flooding is a recurring phenomenon.

In the aftermath of the January 1997 storms, federal, state and local flood control officials continued to hold their breaths for it was only the beginning of the flood season and it was anyone’s guess as to how wet the season would be. The loss of flood storage capacity at reservoirs along the San Joaquin system, which continued into February, has been an ongoing concern aggravated by fears about the impacts of the melting above-average snowpack — the timing and speed of which is quite variable. An early and/or heavy snow melt could lead to further flooding.

In addition, the integrity of the miles of levees along the Sacramento and San Joaquin rivers and their tributaries cannot be assessed until water levels drop. “We won’t relax until we look at the erosion on the levees,” said Walter Yep, head of Corps planning. After the 1986 flood waters receded, substantial erosion was found on the water side of the levees.

Since 1986, a significant portion of the levee system has been rehabilitated but levee stability remains a major concern. Levees are not only a critical part of the flood control system but also protect water supply.

Many are pondering possible lessons to be learned from the latest flooding, which once again revolve around the limitations of the flood management system and risks of floodplain development. The flood control network “does not prevent flooding but only reduces the frequency,” said Jeffrey Mount, who chairs the University of California, Davis Geology Department. Mount is author of California Rivers and Streams.

The new year’s deluge also re-ignited the debate over how to best provide flood protection from the forces of Mother Nature; through technical engineered fixes, such as construction of more dams, or by use of nonstructural flood management methods, which focus on reducing floodplain development — or through a combination of the two.

The governor and Legislature are looking at many of the floodplain management issues highlighted by the January 1997 storms. Gov. Pete Wilson convened an Emergency Flood Action Team headed by Resources Agency Secretary Doug Wheeler to assess the floods and evaluate short-term and long-term flood protection options. The executive task force’s preliminary report released Feb. 13 (see In the News) is expected to be finalized by May 10.

This issue of Western Water provides background to the flooding, summarizes the 1997 flood events and focuses on the main controversies over flood protection practices, which include questions of liability and climate change and potential ramifications for the state’s flood control and water delivery system. For more in-depth information on flood control please refer to the Foundation’s Layperson’s Guide to Flood Management and the American River.