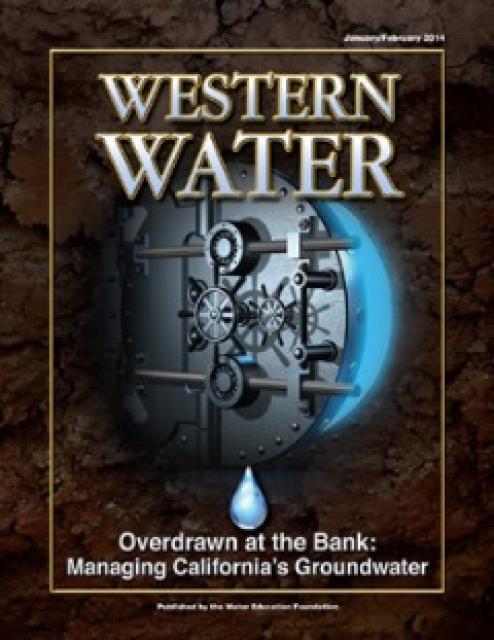 There are areas in California where groundwater is pumped faster than it can be naturally replenished. This isn’t news to anyone familiar with the problem but after many years, the time may be coming when an effort is made to seriously reverse course on what many call an unsustainable practice.

“I think it’s increasingly apparent that we need to change the trajectory we are on in terms of our ability to understand groundwater and to manage it sustainably,” said Mark Cowin, director of the Department of Water Resources. Cowin spoke at the 29th Biennial Groundwater Conference and 22nd California Groundwater Resources Association (GRA) Annual Meeting, which was held in October in Sacramento.

Private property owners generally pump as much water as they need for irrigation and other uses. Unlike surface water diversion rights, groundwater use for the most part is unpermitted and in some areas is managed through adjudication or agreed-upon pumping restrictions. In other areas, however, it is essentially overused and overdrafted, with more and deeper wells being dug.

The idea of requiring a permit to pump groundwater is controversial. For landowners overlying an aquifer, the use of groundwater is a personal property right, therefore certain restrictions on the right may be considered a taking under the Fifth Amendment to the U.S. Constitution.

Longtime experts say a change of thinking is needed when considering the important role groundwater plays in the state’s water supply.

“When we look at California’s water management and infrastructure from the top down, we are often missing this huge component of groundwater; it’s out of sight, out of mind,” said Jay Lund, professor of civil and environmental engineering at the University of California, Davis. “Groundwater has a tremendous role for storage, but we mine it as we did gold.”

Dealing with groundwater overdraft is being mulled at the highest levels of state government, with some sentiment leaning toward giving local governments the ability to control groundwater through measures such as establishing minimum requirements for infiltration of water into the groundwater table. A groundwater concept paper prepared by the California State Water Resources Control Board (State Water Board) says the obstacles to a sustainable groundwater supply “do not lend themselves to a ‘one size fits all’ solution, given the varying physical and institutional characteristics of California’s groundwater basins.”

Lester Snow, executive director of the California Water Foundation, said at the conference that the enabling authority for local and regional water managers “needs to come from the state but the state is not the savior to the groundwater management problem.”

Nevertheless, state law and the California Constitution provide the State Water Board with continuing authority to prevent the waste and unreasonable use of water including groundwater. Case law also recognizes the State Water Board’s authority to protect Public Trust resources. The concept paper says that whether implemented at the local, regional or state level, an effective groundwater management program generally requires five key elements to be in place: thresholds, monitoring and assessment, governance, funding and enforcement.

“I’m not here to say California should do statewide groundwater management,” said Felicia Marcus, chair of the State Water Board, at the Association of California Water Agencies (ACWA) fall conference Dec. 5 in Los Angeles. “The question is, ‘what is the state’s role?’”

While the problem of groundwater overdraft is well-known, fixing it in an equitable manner presents a significant challenge for all involved, from officials in Sacramento to the farmer tilling his field in the southern San Joaquin Valley. Those on the side of a solution implemented at the local level say it behooves groundwater users to get together and work on ways to stop overdraft before the heavy hand of the state arrives and forces the issue.

“Direct state regulation, permitting, or management of groundwater is ill-suited and unwarranted at this time given the wide diversity and tremendous complexity of groundwater basins in California,” wrote Chris Scheuring, managing counsel of the California Farm Bureau Federation, in comments to the State Water Board. “What is needed to improve groundwater management in California is not state control, but rather better tools, incentives, structures, and institutions to support and encourage local interests to manage their areas. The State Water Board’s authority with respect to percolating groundwater should remain confined to the regulation of water quality.”

Dick Moss, a water resource consultant based in Visalia, said “millions of acre-feet” of water have been lost in the past 20 years because of the unreliability of imported supplies and the cancellation of projects designed to boost water deliveries to the valley specifically to address groundwater overdraft. “Big picture fixes” are needed, he said, including some level of improved imported water delivery.

“I get concerned when I hear talk of keeping imported water supplies where they are instead of increasing them,” Moss said “We are left with the prospect of taking significant amounts of highly productive farmland out of production unless additional supply is part of the answer.”

Meanwhile, the steady pumping of groundwater has revived concern about subsidence, the literal sinking of the Earth in response to shrinking aquifers. Subsidence was well-known in the time preceding the arrival of imported of 28 feet in some areas. With reduced deliveries, pumps are running longer and, as scientists have discovered, subsidence is increasing. In November, the U.S. Geological Survey (USGS) reported that “large-scale and rapid subsidence has the potential to cause serious damage to the water delivery infrastructure that brings water from the north of the valley to the south where it helps feed thirsty cropland and cities.”

According to USGS, subsidence is reducing the capacity of the Delta-Mendota Canal, the California Aqueduct and other canals that trans­port floodwater and deliver water to agriculture, cities, industry and wildlife refuges.

Gaining a foothold in controlling groundwater extraction does not require new legislation or extensive rewriting of current rules and regulations, experts say.

Buzz Thompson, professor of Natural Resources Law at Stanford Law School, told the Biennial Groundwater Conference audience that “we have the legal authority in California to address all the various problems, such as groundwater overdraft and subsidence.

“The problem is not the legal authority, the problem is that the processes and remedies that we can pursue are either very costly to pursue, they require political will we don’t have at the moment or both,” he said. “As a matter of our historical common law in California, surface water and groundwater are also interrelated and should be managed together.”

If managing groundwater means assigning permits, then the issuing entity would have to be cognizant of the consequences of limiting groundwater extraction, lawyers representing private property interests say.

“Water rights are property rights; they cannot be taken without just compensation,” said Brad Herrema, an attorney with Brownstein Hyatt Farber Schreck in Santa Barbara, at the conference in Tulare. Also applicable is the Commerce Clause, he said. Groundwater is an article of commerce and thus subject to both the restraints on state action and the potential for federal control created by the Commerce Clause, the constitutional provision that gives Congress the power to regulate commerce “among the several States.”

This issue of Western Water looks at California groundwater and whether its sustainability can be assured by local, regional and state management. For more background information on groundwater please refer to the Foundation’s Layperson’s Guide to Groundwater.

The recent chemical spill in the Elk River in Charleston, West Virginia, was a reminder of the value of clean drinking water to a community. The water use ban affected 300,000 for about 10 days. Even though the ban has been officially lifted, the community does not yet have confidence in their drinking water source. Many people there are asking: Is my water safe? Officials are assuring the people that the water is safe and the mayor, is telling people to drink the water. Many are not convinced and are still drinking bottled water. “We have to trust each other,” he says. The lesson seems to be that if we lose confidence in our drinking water it’s hard to get that confidence back.

In California and in many places in the West, it’s not a question of confidence in the quality of the water that is causing intense concern; it’s a question of the confidence that there will be enough water. As everyone knows, California is in the throes of the worst drought since records have been kept. The Department of Water Resources announced that the State Water Project will make zero deliveries of water to its urban and agricultural customers – the first time this has happened in the 54 years of the project’s existence. There is no sector of society not affected by this drought. The State of Emergency proclaimed by Governor Brown won’t produce rain, but it will bring attention to the extreme problem and help local agencies and California get some state and federal assistance.

The drought is certainly a “teachable moment” for all of us to consider our per­sonal use of water. And the drought offers us the opportunity – sometimes painful –to consider how local supplies can be further diversified through increased water conservation, water recycling, stormwater reuse, groundwater banking and manage­ment, water marketing and desalination. It is also a time to consider the cost of water and to encourage people to be willing to invest in their local systems. That can mean increased water rates to improve infrastructure – both on the local and statewide level – and tiered water pricing that reflects actual use.

In the last California major drought, about 1989-1992, much progress was made in improving technology in agricultural water use, and in homes and industry with improved toilets and washing machines reducing water use by about half. But remember, landscaping still makes up about 60 percent of the home water use, so take advantage of information to make your yard look like it actually belongs in the West and landscape with native and Mediterranean plants. You will enjoy a yard that is beautiful and sustainable even in drought times!

I have been spending quite a bit of time responding to press inquiries about the drought. The Foundation has lots of information online, in publications, videos and at events that discuss the facts surrounding this drought including ways to conserve water in our homes and on farms.