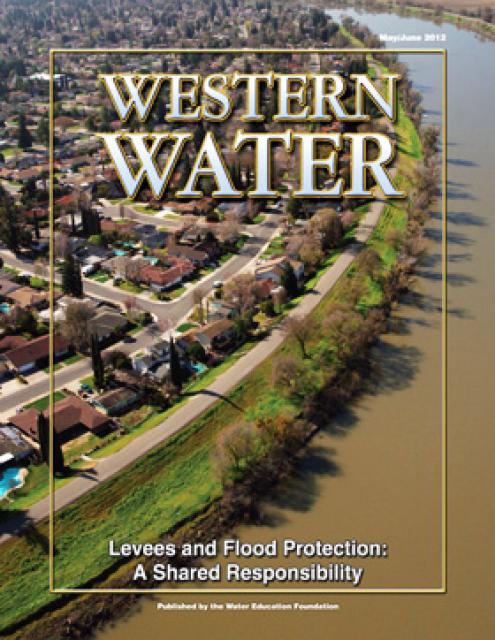 Levees are one of those pieces of engineering that are never really appreciated until they fail. California would not exist as it does today were it not for the extensive system of levees, weirs and flood bypasses that have been built through the years.

The system has worked but every so often conditions arrive that test its capacity to spare people and property from the brunt of surging waters. Flooding in the Central Valley in 1986 and 1997 collectively caused more than $1 billion in damage. Later, the devastation wrought by Hurricane Katrina in New Orleans reiterated to Californians the potential danger of mass levee failure.

A 2007 law called for a Central Valley Flood Protection Plan, which the California Department of Water Resources (DWR) is working to finalize. Written to update a century-old system, the Flood Plan exists for practical considerations as well. Because of the flood threat, many view the Flood Plan as a positive first step in what looks to be a lengthy process to reconsider how floods are channeled through the Sacramento-San Joaquin river systems.

The Flood Plan is a 25-year, $17 billion blueprint that includes the acquisition of as much as 40,000 acres of land to accommodate flood waters as they drain from the Sacramento and San Joaquin River watersheds. It is based on “broad management actions to improve the flood management system, policies, and institutions at a system-wide level, while enabling flexibility in addressing changing needs and funding scenarios,” according to DWR.

“The strength is the system-wide, integrated approach and the interconnectedness of all the actions we take,” DWR Director Mark Cowin told the Flood Board April 5. “The days of single-purpose type projects are over.”

MacDonald said the Flood Plan responds to a flood protection system that is clearly outdated. “There are two problems today,” said MacDonald, who served on the Sacramento Area Flood Control Agency (SAFCA) board of directors for 12 years. “One is construction material – [the levees] are old piles of dirt, not engineered levees. We build freeways out of concrete, steel and asphalt and our levees are piles of dirt. The other problem is there is no adequate channel capacity in the system.”

The Flood Plan has its detractors, including those from the northern Sacramento Valley who fear it will infringe on individual property rights. “Not only does this benign-sounding project boast a multi-billion-dollar price tag, but it assumes the confiscation and control of tens of thousands of acres of privately owned, often prime agricultural land extending from Butte County to Fresno County,” state Sen. Doug LaMalfa, R-Richvale, wrote in an April 1 commentary.

Agricultural stakeholders from the Sacramento Valley are disappointed that the Flood Plan does not invest more in flood protection for rural areas. The lack of funding and adequate flood protection for rural areas is compounded by the likelihood that the Federal Emergency Management Agency (FEMA) will reclassify large areas of the Sacramento Valley as regulatory floodplain, resulting in costly insurance and building requirements for agricultural areas that have been classified as outside the 100-year floodplain for the last 40 years.

As FEMA moves toward showing more areas as not having a minimum 100-year level of flood protection (A 100-year flood has a 1 percent chance of being equaled or exceeded in any single year and is the basis for mapping where inundation will occur), remapping will be a “huge and painful process,” said Kathy Schaefer, regional engineer with FEMA.

Schaefer spoke in March to an ad hoc committee of experts convened by the National Academies to come up with ways to improve levee safety and the National Flood Insurance Program (NFIP). The panel is focusing on risk analysis, risk reduction and risk communication for a report expected next year.

The high cost of fortifying non-urban areas to a 100-year level of flood protection to comply with FEMA is a problem, and leaves people with no alternatives to costly flood insurance. “The smaller, rural districts that thrive on agriculture – for those the money just isn’t there to obtain at least 100-year protection,” said Scott Shapiro, an attorney for the California Central Valley Flood Control Association, a group of local flood management agencies. “Unfortunately, if they can’t meet FEMA’s 100-year level, that means they can’t construct any new structures.”

Shapiro told the ad hoc committee “it is unrealistic to relocate these historic communities and say, ‘let’s look for high ground,’” and that FEMA’s remapping of flood hazard zones “is becoming very dramatic.”

“What FEMA sees now is that the program created 40 years ago doesn’t really represent modern day situations and they have been aggressively updating it,” he said.

Meanwhile, state and local flood management agencies are grappling with the U.S. Army Corps of Engineers’ (Corps) new vegetation management policy that they say essentially strips levees bare of any vegetation in virtually all circumstanc­es unless a special variance is approved. The Corps says it has required a 15-foot vegetation-free zone on levees since 1993 and that “multiple opportunities” exist to retain vegetation on levees if circumstances warrant.

“Our standard is not ‘no vegetation on a levee,’” said Pete Rabbon, director of the Corps’ Flood Risk Management Program in Washington, D.C.

The tension between the federal government and California contrasts with the extensive amount of work done by the Corps to boost flood protection in the Valley. However, tough fiscal times have local officials pondering alternative approaches. “Given the uncertainty of federal funding … we are looking for ways to adapt to the reality that they can’t stay as a 65 percent [cost-share] partner,” Tim Washburn, director of planning for SAFCA, told the ad hoc committee.

This issue of Western Water discusses several flood-related issues, including the proposed Central Valley Flood Protection Plan, the FEMA remapping process and the dispute between the state and the Corps regarding the levee vegetation policy.

If you live in California, you live with risk. In much of California, the risk of flooding is much more than most people realize. Flood management is the subject of this Western Water and other Foundation education efforts. Recently, we produced a program for public television on managing floods in California: Overcoming the Deluge, now available from the Foundation, focuses on flooding in the Central Valley. From Redding to Bakersfield, California’s most devastating floods have happened in the Central Valley. Anyone who has spent more than a decade or two in this area knows that floods happen. In fact, the Sacramento area’s risk for flooding is higher than anywhere else in the nation.

The Central Valley was referred to by early settlers as an “Inland Sea” because of the annual winter inundation. In the great flood of 1862, it rained for 45 days and one-third of the taxable property was destroyed! Later floods led to the construction of a bypass system – an idea long opposed by the U.S. Army Corps of Engineers and proposed by a Colusa newspaperman, Will Green, in the later 1800s. Successive floods in the early 20th century finally convinced the engineers that we needed a big bypass area and it was finally developed along much of the Sacramento River system. The bypass system was a great improvement but it was developed around levees – often little more than piles of dirt. Now we are trying to rebuild many of these levees.

In the meantime, dams were built. Sacramento was saved from major flooding again during the huge 1955 flood because Folsom Dam was nearly complete. Now Folsom Dam will soon have an auxiliary spillway to handle the increased floods that inevitably come to the area. In this case, the Corps of Engineers and the state and local flood control agencies worked together with the goal to provide a state-of-the-art flood structure to this very at-risk region.

Working on the documentary, I learned about the increased sophisticated calculation that today can warn us faster about the intensity of weather patterns. These flood forecasting tools definitely give more information to flood decision makers.

Now the state has released a flood control plan to be enacted this year. It’s not a blueprint for specific projects but it offers options and an outline of improvements. There are private property concerns that you can read about in this issue.

The documentary reinforces the idea that there is some responsibility as homeowners to carry insurance because, as stated in the documentary, “All the dams, reservoirs, bypasses and levees in the system can do a great job of minimizing the risk of flooding, but can never erase it.” But it is comforting to know that state and federal plans and active programs are underway to protect the many Californians who live in floodplains.

Western Water Excerpt May 1, 2012 Gary PitzerRita Schmidt Sudman
Back
This item appears in:
Footer pod May 20, 2014