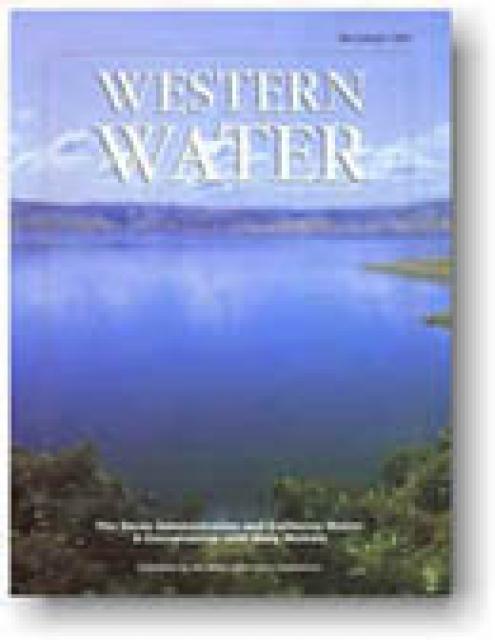 In January, Mary Nichols joined the cabinet of the new Davis administration. With her appointment by Gov. Gray Davis as Secretary for Resources, Ms. Nichols, 53, took on the role of overseeing the state of California’s activities for the management, preservation and enhancement of its natural resources, including land, wildlife, water and minerals. As head of the Resources Agency, she directs the activities of 19 departments, conservancies, boards and commissions, serving as the governor’s representative on these boards and commissions.

When he appointed her, Gov. Davis noted that Ms. Nichols has spent virtually her entire career working to protect the environment and establish standards that keep our air clean, our water safe to drink and preserve our natural resources.

Prior to her appointment, Ms. Nichols was executive director of the Environment Now Foundation, a non-profit organization whose mission is to protect and restore the environment and demonstrate improved methods of managing natural resources.

From 1993 until 1997, Ms. Nichols served as assistant administrator at the U.S. Environmental Protection Agency. Appointed by President Clinton to administrate the national air program, she led the four-year effort to adopt revisions to the national health standards for ozone and fine particulates. She oversaw a staff of 1,700 with an annual budget of $700 million.

Ms. Nichols was a founding attorney for the Los Angeles-based Natural Resources Defense Council, an environmental advocacy group established in 1989. She served in the administration of Gov. Jerry Brown as secretary of environmental affairs and chair of the Air Resources Board. That’s where she met Davis, who served as chief of staff in the Brown administration.

On Feb. 23, I interviewed Ms. Nichols in her office about the new state administration and her thoughts on the water challenges facing the Davis administration: the CALFED Bay-Delta “fix,” California’s Colorado River 4.4 plan, groundwater and water marketing.

When I was in her office, I learned a little more about Ms. Nichols. On display are pictures of her family, including two grown children of whom she and her husband are quite proud.

I also got a glimpse into her character when I listened in on a conversation between her and some students. They wanted to know what had motivated her to get involved in these public service issues. Ms. Nichols quietly mentioned that she had participated in the Freedom Summer of 1964 in the South as a student registering blacks to vote in Mississippi. She lived in a sharecropper’s cabin in Fayette. And she was there when three other college civil rights workers were killed and buried in an earthen dam.

Ms. Nichols, who graduated from Cornell University, then went on to become the first person in her family to become a lawyer – receiving her juris doctorate from Yale University.

So, while we don’t know yet what kind of Resources Secretary Mary Nichols will be, we know a little bit about what kind of person she is. We know that she has courage and she will try to make a difference in this position, as she has done throughout her career.

SUDMAN: Tell me a little bit about the philosophy that you bring to this position. We’ve had a different administration for 16 years, obviously there will be some changes made.

NICHOLS: I would describe my working philosophy as being pragmatic environmentalism. I have been working to restore and improve the environment of California ever since I moved out here as a brand new graduate of law school in 1971. I have worked both in the private sector and in the public sector at every level of government — as well as in the not-for-profit and the for-profit world. So I guess in some ways I have achieved the 360 degree view of some of the issues that I am working on.

One of the major lessons that I have distilled from all that life experience is that in order to make a difference in our lifetime and to pass on a world that is as good as the one we inherited to our successors, we have to find new ways of solving problems – most of the problems are human, as opposed to nature’s problems — and to do it by bringing people together and working to find common solutions. But where we can’t find common solutions that everyone agrees on, then taking the best consensus that we can, making decisions and moving forward in a political context.

SUDMAN: So are you looking in this job to bring balance to the issues? In other words, in the area of water we’ve got the environmentalists; we’ve got urban people, agricultural people and there are many subsets of those groups. Are you looking to balance those issues or do you think we’ve got to go in one other direction right now?

NICHOLS: Well, I think the word balance sometimes is misused by people who mean that they want their particular agenda to receive more consideration than perhaps it has been given in the past. But I do believe that no solution is going to be long lasting if it isn’t acceptable to all the necessary parties. No group can be disenfranchised. No one can be hurt or gain disproportionately, or in the long run you will have an unstable situation and it will be revisited time and time again until those who feel they’ve been unfairly treated achieve what they consider to be a more equitable solution.

NOTE: Other topics explored during the interview: CALFED, the new director of the Department of Water Resources, growth, groundwater management, MTBE and California’s Colorado River 4.4 plan. A complete copy of this 16-page magazine is available from the Foundation for $3. Visit our on-line store and add the March/April 1999 issue of Western Water to your shopping cart.

One of the most intriguing panels at our recent Executive Briefing, revolved around the subject of “smart growth.” Some suggest smart growth may be a way between growth and no-growth, a third way. And according to a report in USA Today, smart growth “is bound to become the political mantra of the new millennium.” Actually as defined by Vice President Gore’s “livability agenda,” it refers to a program primarily to purchase open space while allowing for growth.

A wide variety of viewpoints were expressed about “smart growth” by members of the panel. Popular newspaper columnist Peter King served as moderator and introduced the topic by citing personal experiences in the traffic and growth patterns of the Central Valley. He suggested that water is no longer seen as the key ingredient and stimulus for economic growth, at least in the Central Valley, which he covers for McClatchy Newspapers. Those who want to stop growth are now looking more at land than water issues, he said.

He agreed with panelist Steve Sanders of California Futures Network who indicated that Californians start to plan for future growth when times are good and then concentrate on survival when the economic cycle takes a down turn. Sanders cited polls showing that building infrastructure is no longer seen as a solution to water and transit problems.

Indeed, you may have seen the Time/CNN poll in the March 22 issue of Time magazine which showed that 57 percent of those polled favor greenbelts between their communities and new development. Of course, Cliff Moriyama of the California Building Industry Association noted that poll and others do not include the opinions of the new Californians who are not here yet. Therefore, he said, the newcomers cannot participate in the debate.

Moriyama also noted that the Time poll showed the vast majority of people (69 percent) say it’s more important for individuals to do what they want with the land they own than the 25 percent who support the government’s ability to regulate development for the common good.

From 9 to 11 million more people will live in California in the next decade and, according to Carol Whiteside of the Great Valley Center, that means lots of needed infrastructure at a high cost. She also noted that in the Central Valley a lot of folks are not in these discussions, especially minority groups.

Finally, Randy Kanouse of East Bay Municipal Utility District noted that districts like the one he represents can’t stop growth by constricting water supplies but first priority must be for utilities to protect existing water users. Each agency, he pointed out, is unique in its water supply and sensitivity to the water-growth issue.

If “smart growth” is a third way between growth and no-growth, it could have a future. However, as our panelists pointed out, the path away from sprawl is a rocky one whether it’s led by “smart growth” planners or others.

Gov. Davis Calls for End of MTBE in California

After months of debate over whether California’s air quality benefits from MTBE outweighed the risks of contamination of its drinking water supplies, Gov. Gray Davis has ordered that the chemical be phased out of the state’s gasoline.

Methyl tertiary butyl ether (MTBE) is an oxygenate designed to help fuel burn cleaner, reducing tailpipe emissions. Since its statewide use began in 1996, air quality officials had estimated a 15 percent reduction in smog — the equivalent of removing 3.5 million cars from the roads.

But MTBE is highly soluble and migrates with groundwater – dissolving in the water rather than sticking to the soil — and does not biodegrade very quickly. As the chemical was detected in more and more groundwater aquifers, forcing some communities to close down their wells, water suppliers became alarmed. Even at low levels, MTBE’s turpentine like taste and odor can render drinking water unacceptable to consumers.

While some pushed for an outright ban on the use of MTBE in California, Davis said such a move would cause gasoline prices to soar because there is not a readily available substitute oxygenate. Instead, Davis’ plan calls for the discontinuation of MTBE by Dec. 31, 2002, along with an investigation of alternative smog-fighting gas additives that won’t pollute the water.

The plan, however, rests on a change or waiver in the federal Clean Air Act. Legislation introduced in Congress last year to amend the act and allow California to discontinue the use of fuel oxygenates like MTBE ran into opposition from the Clinton administration, some environmental groups, and proponents and manufacturers of fuel oxygenates.

Davis said he would ask U.S. Environmental Protection Agency Administrator Carol Browner for an immediate waiver from oxygenate requirements; that the state can meet the smog requirements without the additive. The governor also pledged to deliver MTBE-free gasoline to one California city — South Lake Tahoe — “at the earliest possible date.” Groundwater is South Lake Tahoe’s only source of supply and the city has had to shut down numerous wells in the past 18 months because of MTBE contamination.

Although South Lake Tahoe water officials were disappointed by Davis’ plan to phase out rather than immediately ban MTBE, his action was supported by representatives from the state’s oil refineries. California refiners spent between $4 billion and $5 billion in the early 1990s to modify their refineries to manufacture gasoline with MTBE, but last year, several refiners began selling MTBE-free gasoline in the Bay Area in response to growing concern about groundwater contamination.

One of the key steps during the next few months, according to Davis, is for state officials to conduct an “environmental fate and transport analysis” of ethanol — the oxygenate likely to replace MTBE in air, surface water and groundwater.

While some oil refineries said they would be able to beat Davis’ Dec. 31, 2002, deadline, an MTBE phase out vs. an outright ban means leaks at underground gas tanks and supply lines could still occur — making the next major issue one of who pays the costs to clean up existing and future MTBE groundwater contamination. In his March 25 order, the governor called for legislation that would extend a state fund for fuel clean ups by six years, to 2010.