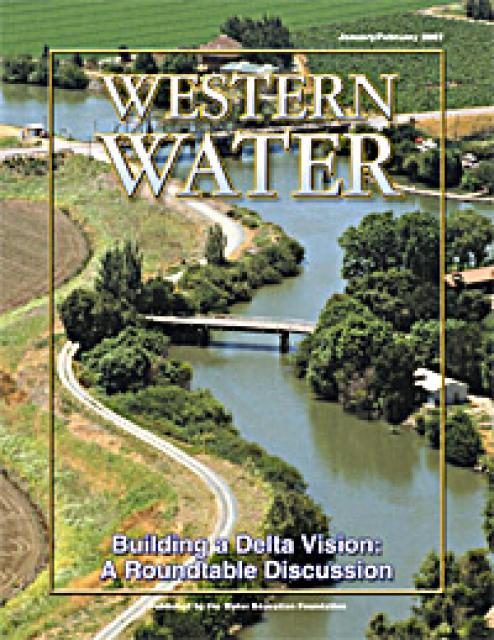 The Sacramento-San Joaquin Delta is faced with many major challenges: land subsidence, deteriorating levees and flood risks, agricultural sustainability, increasing urbanization, water supply reliability, ecosystem health, sea level rise, climate change, and water quality. Confronted with the question of how to sustain the multiple values/uses of the Delta, federal, state and local officials, Delta residents, environmentalists, water agencies and others are working to craft a vision of the Delta 100 years from today.

There are multiple Delta Vision processes underway and a decision on the future of the Delta will be made in the next two years. Unlike past planning efforts that focused primarily on water resource issues and the ecosystem, these current efforts are expanding to include land use planning, recreation, flood management, and energy, rail and transportation infrastructure. How – or if – all these competing demands can be accommodated is the question being considered.

The CALFED Bay Delta Program has completed its seventh year and is now preparing an End-of-Stage 1 Evaluation Report. A draft is due in August; with a final report due by the end of 2007. Several Delta programs/ studies recommended in the CALFED Record of Decision, including a review of Delta science, and other reports are now underway.

Called for in the CALFED 10- year action plan, the Bay Delta Conservation Plan (BDCP) is a voluntary new way for Bay-Delta system water users, who must comply with the federal and state Endangered Species Acts, to work cooperatively to attain incidental take coverage via a Habitat Conservation Plan (HCP) and Natural Community Conservation Plan (NCCP). The plan is now underway under the auspices of the California Resources Agency. A draft report is due in October 2007.

Conducting a Delta Risk Management Strategy (DRMS) was a recommendation in the 2000 CALFED Record of Decision. Overseen by the Department of Water Resources, the Department of Fish and Game and the U.S. Army Corps of Engineers, DRMS’ charge is to look at sustainability of the Delta, and assess major risks to Delta resources from floods, seepage, subsidence and earthquakes, sea level rise and climate change. DRMS also is to evaluate the consequences and develop recommendations to reduce and manage the risk. A draft risk assessment report is due April 2007; a final report in August 2007. A draft risk reduction report is due in August 2007; a final report in October 2007.

Legislation and the Governor’s executive order signed in September 2006 initiated the Delta Vision Process, which is designed to build on work done through CALFED, but encompass the Delta’s full array of infrastructure and land-use resources. Delta Vision will identify a strategy for managing the Sacramento-San Joaquin Delta as a sustainable ecosystem that can support its environmental and economic functions. A final Delta Vision report with recommendations from an as-yet-unnamed Blue Ribbon Task Force is due Jan. 1, 2008. A task force Delta strategic plan is to be submitted to the public and the Delta Vision committee by Oct. 31, 2008 and a report is to be submitted by the committee to the governor and Legislature by Dec. 31, 2008.

Several other major planning efforts are underway including the Pacific Process, overseen by the Natural Resources Institute of the University of the Pacific. The Institute convened the group by inviting many of the individuals and groups that were involved in the legislative debates during the last session. The group has been meeting monthly since October to address issues related to California flood management such as a state flood plan, flood emergency response plans, and potential legislation to address flood liability, flood protection funding and floodplain management. In the future, other stakeholders may be convened to discuss other Delta related issues.

Also shaping the discussion are the UC Berkeley Delta Initiative’s Delta Charrettes report, where participants considered various land use, infrastructure and levee configurations – such as preserving portions of the Delta as a state park – as well as the pending “Envisioning Futures for the Sacramento- San Joaquin Delta” report to be issued by the Public Policy Institute of California, in February 2007. (As this magazine went to press, the PPIC report had not been released.)

On January 10, Foundation Executive Director Rita Schmidt Sudman and Program Director Sue McClurg sat down to interview four longtime participants in Delta politics and planning efforts for a roundtable discussion about some of the key Delta issues now under discussion. All four of these folks are involved in one or more of the processes/venues within the Delta Vision Process.

Laura King Moon is the assistant general manager for the State Water Contractors where she serves as the program manager of the Bay Delta Conservation Plan for the water users. Prior to joining the SWC in 2000, she managed the Bay-Delta program for the San Luis & Delta-Mendota Water Authority. She previously has worked for the U.S. Bureau of Reclamation’s Mid-Pacific Region, East Bay Municipal Utility District and the Natural Resources Defense Council.

Leo Winternitz has over 25 years of water resource experience in California. Most recently, he assumed the position of deputy director of the CALFED Bay-Delta Program. In his previous role as executive director of the Sacramento Water Forum, he led the effort to bring together 40 diverse groups of various interests to collaboratively negotiate a regional water supply and environmental protection agreement to the year 2030.

Tom Zuckerman is co-counsel for the Central Delta Water Agency. He is a member of the Bay Delta Public Advisory Committee, serving on committees and subcommittees dealing with levees, drinking water, ecosystem restoration, water supply and working landscapes. A University of Pacific regent, Zuckerman recently helped to establish the Natural Resources Institute, which is coordinating the Pacific Dialog Group.

Sudman: Is the Delta Vision the umbrella of all the things you’re all involved in?

Bobker: The Delta Vision is probably right now the best potential venue for beginning to provide that framework. But of course, it really doesn’t exist yet, or not in full. And so one of the big issues we are dealing with is how we take these existing pieces and fit them into a structure that really in some ways doesn’t exist.

Zuckerman: These things are in some respects connected, but I don’t think their relationship has been clearly enough defined. I see a two track opportunity where ultimately there would be an intersection. I see the Delta Vision track being largely a land use type of investigation as to what the Delta landscape should look like in the future. What it doesn’t seem to address as directly are the water-based ecosystem, water quality and export issues. I see that as a separate track developing within the Bay Delta Conservation Plan. I think there would be some advantage to pursuing those tracks parallel to one another, understanding that at some point they need to come together. I don’t see Delta Vision encompassing the whole thing.

Sudman: Leo, do you agree that the Delta Vision is more land based?

Winternitz: A primary function of Delta Vision has to be land based, but the governor’s executive order called for addressing water supply, water quality and other issues. You need to address the land form issues and answer the question of what is a sustainable ecology in the Delta 100 to 200 years from now during the changing conditions. Where does agriculture fit? Where does a floodplain for the Delta fit? Where do the marshes fit? If you need variable salinity in the Delta for native species, how do they fit? That is part of the vision. After you reach some common agreement on some of those major issues – and I don’t know if that will be possible – then you can start addressing, based on this vision of the Delta, what kind of water supplies can fit into that. And what type of governance we need to sustain that vision.

Bobker: A shortcoming of Delta management in the past has been the bifurcation between the land use decision making processes and how we manage the aquatic system. It would be my hope that the Delta Vision could be a place where those tracks meet because I think we will continue to fail to manage the Delta adequately unless we consider land use in the context of the ecosystem. One of the challenges, though, is that this process is not going to conduct all of the analyses necessary to understand and make decisions. It is going to rely on a lot of processes already underway. And we have to ask [whether] the right questions are being asked in those processes. And is there sufficient information being developed to support what could potentially be some very big and big and controversial decisions.

NOTE: A complete copy of this 16-page magazine and the full roundtable discussion is available from the Foundation for $3. Visit our Products Page and add the January/February 2007 issue of Western Water to your shopping cart, http://www.watereducation.org/store/default.asp?parentid=7

Whenever I give my “Water 101” presentation for non-water wonks, I devote a lot of time to that water intersection we all know so well – the Delta. I explain how the Sacramento and San Joaquin rivers intersect in the Central Valley before meeting San Francisco Bay. I explain about the value of the Delta for its agriculture, ecosystem, water supply and so much more. And then I explain about the political intersections of the Delta – how the triad of water interests has fought over this region for decades in the courts, in the Legislature and at the ballot box.

I also tell the audience the other side of the story; how these groups have tried to work together to resolve one Delta issue or another. The best-known effort was the 1994 Bay-Delta Accord. I was there when the accord was signed by then-Gov. Pete Wilson and Interior Secretary Bruce Babbitt and leaders from the agricultural, environmental and urban water communities. It was truly a historic moment.

The accord, of course, led to the formation of CALFED (and subsequently the California Bay-Delta Authority) and its ambitious plan to manage the Delta and its competing uses/values, including water quality, levees, ecosystem restoration and water supply reliability. Implementation proved to be a challenge as money became tighter and the political stakes became higher.

Today, efforts to forge a common vision of the Delta continue under the auspices of several studies/programs. Some of these directly owe their existence to recommendations in the CALFED Record of Decision. Others were launched by political action in the Legislature and the governor’s office. Additional discussions have been initiated at the grassroots/local government level.

What’s new in most of these Delta Vision processes is the effort to broaden the discussion beyond water resource and ecosystem issues to include land use planning, recreation, flood management, and energy, rail and transportation infrastructure. There also is a more realistic attitude that not everyone will get what they want. That fact and the expanded agenda will make for a more complicated and controversial discussion, but I believe it will make for a stronger – and hopefully more broadly supported – plan for dealing with the Delta’s many issues.

Recognizing how difficult it would be for everyone to keep abreast of all these Delta Vision efforts, the Foundation approached the state last year seeking funding to hold a series of free public Delta Vision Workshops. We held our first workshop in November; the next one is scheduled for March 16 in Suisun City. (See page 14 for more information.) We believe these workshops fit within our mission to educate the public about water issues. We will be holding two more workshops later this year and one early next year; we have not yet determined where and when but we will keep you posted. For those who cannot attend, we will be posting a written summary of the event on our web site; summaries for the November workshop and last year’s Delta conference at the University of the Pacific (co-sponsored by the Foundation) are now available at www.watereducation.org/deltavisionworkshops.asp