Are We Keeping Up With Water Infrastructure Needs? January/February 2012 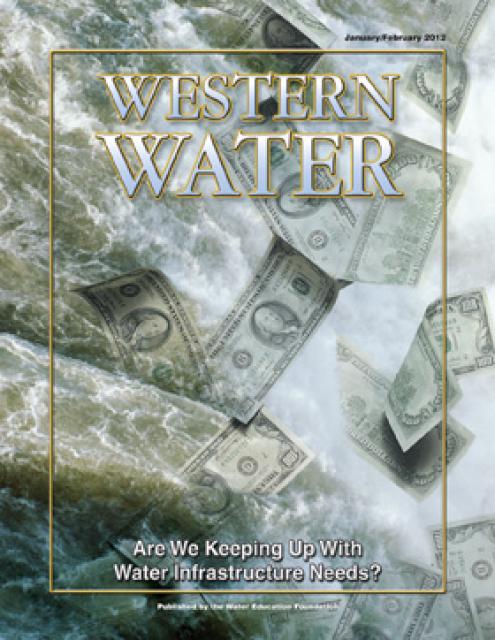 Everywhere you look water infrastructure is working hard to keep cities, farms and industry in the state running. From the massive storage structures that dot the West to the aqueducts that convey water hundreds of miles to large urban areas and the untold miles of water mains and sewage lines under every city and town, the semiarid West would not exist as it does without the hardware that meets its water needs.

The process is continual and takes place out of sight and out of mind until the unexpected occurs and a residential area finds itself under a geyser of water after a pipe breaks.

California’s water infrastructure is showing its age. Pipes installed a century ago have reached the end of their effective life. Municipalities and water agencies everywhere face enor­mous repair and retrofit bills that are passed along to ratepayers.

“It is true we are at the end of the design life for the infrastructure we built last century,” said Richard Luthy, professor of civil and environmental engineering at Stanford University. Pipes and other hardware installed 50 to 100 years ago is a “common story,” he said.

Luthy heads the Engineering Research Center for Re-inventing the Nation’s Urban Water Infrastructure, a collaboration of Stanford, the University of California at Berkeley, Colorado School of Mines and New Mexico State University. He and others are working to come up with water systems of the future that use less energy and material resources while providing “social benefits and ecological benefits.”

“We are in a five to 10-year effort, supported by the National Science Foundation, to look at the level at which water systems function, how we manage them and how technological change might occur,” he said. “If we don’t answer it at that level, no good ideas will be implemented.”

Luthy’s group is not alone in its quest to re-imagine water systems. The Washington, D.C.-based Clean Water America Alliance boasts a powerhouse lineup of utility, industry and environmental experts that aims to substantially change the conversation about water infrastructure to further emphasize the concept of sustainability.

“Water policy is sometimes stagnant and the water sector is often resistant to change for a variety of reasons,” said Ben Grumbles, president of the Alliance and a former high-ranking official with the U.S. Environmental Protection Agency (EPA). The “ticking time bomb” of needed repairs and replacement “gives serious thought to changing paradigms,” he said.

A major aspect of the infrastructure discussion is the costs of replacing pipe systems and other hardware and the means by which it’s paid for. Money will be on the mind of California voters this November as they contemplate approval of a possible $11 billion water bond that includes funding for infrastructure projects. A vote on the bond has been delayed once and whether it appears on the November ballot remains to be seen.

Elsewhere, the proposed Bay Delta Conservation Plan is centered on an alternative conveyance canal costing billions of dollars and paid for by water contractors. And then there is the state’s antiquated levee system that needs an estimated $17 billion in repairs to protect lives and property in the Central Valley. Accomplishing that task requires a “system-wide investment approach for responsibly meeting the state’s objectives to improve public safety, ecosystem conditions and economic sustainability while recognizing the financial challenges facing local, state and federal government agencies,” according to the California Department of Water Resources (DWR).

Aging infrastructure illustrates what some see as the failure of many agencies, particularly municipalities, to have properly invested in replacing infrastructure or even regular replacement programs. Deferred maintenance happens for many reasons – sometimes it’s fiscal and other times it’s simply an agency’s avoidance of tearing up streets and causing temporary inconvenience to businesses and residents.

Eruptions of water mains or sewer lines bring into focus the due diligence of elected boards in maintaining infrastructure. Officials say it is difficult to single out any one community for failing to keep up, given the unique circumstances of each governing body.

“Do the leaders have the funding resolve in light of their constituents’ view of taxation? That varies,” said Cris Carrigan, director of the State Water Resources Control Board’s (State Water Board) Office of Enforce­ment.

In December, the American Society of Civil Engineers (ASCE), which has been critical of the overall failure to keep up with infrastructure investment, released a report that talked about the collective costs of inaction and how deferred maintenance is more expensive than acting on matters immediately.

“Even with increased conservation and cost effective development of other efficiency methods, the growing gap between capital needs to maintain drinking water and wastewater treatment infrastructure and investments to meet those needs will likely result in unreliable water service and inadequate wastewater treatment,” states the report, Failure to Act: The Economic Impact of Current Investment Trends in Water and Wastewater Treatment Infrastructure.

Robert Roscoe, general manager of the Sacramento Suburban Water District and a member of ASCE’s Committee on America’s Infrastructure, said “very few” water and wastewater agencies in California are keep­ing up with their aging infrastructure, which portends trouble down the road.

“I am a believer that because the water and wastewater industries are so heavily regulated, the cost of not fixing it is the inflated cost of fixing it later plus the cost of all the fines and emergency responses you have until it is fixed,” he said. “Therefore the cost of inaction always exceeds the cost of action.”

The problem, Roscoe said, is that the water agencies of long ago did not adequately account for the cost of future replacement in their water rates. With rapid growth in California after World War II, the initial cost of water pipe installation in new subdivisions was paid for through connection fees included in home mortgages, not water rates. Once the mortgages were paid, years of low water rates followed. Consequently, districts found themselves far behind in socking money away for when it’s needed for large-scale replacement projects.

“Water rates did not include replacement costs back in the day,” he said. “As a general rule, they don’t include the full asset depreciation costs. They should.”

Raising water rates is a thorny proposition, given the public’s general resistance to higher taxes and the reluctance of elected officials to vote for a rate hike. Water districts have it especially difficult because of the repeated message of water conservation, which reduces revenue, and the need to maintain an adequate and even progressive flow of income to account for necessary infrastructure replacement projects.

Agencies must also navigate through Prop. 218, the 1996 law that requires proposed fee increases to undergo public approval, including a protest vote if enough opposition emerges. Prop. 218 “doesn’t affect water rates by itself, it only affects the process which must be followed to increase water rates, requires a definitive nexus between the rates charged and the service provided, and makes increasing water rates a more uncertain process,” Roscoe said.

How the anticipated effects of climate change (more rain, less snow) burden existing infrastructure is an issue yet to be fully contemplated.

“It’s a huge issue in the long-term for the Sierra Nevada/Cascades reservoirs and some of the related mainstem river flood control projects, which weren’t designed to be operated under conditions of more winter rain and less snow,” said Jeanine Jones, DWR’s interstate resources manager. “This is why we and the federal government are studying adaptation options such as forecast-based reservoir operations now – these operational actions may be able to buy more time until major infrastructure fixes are needed.”

Climate change includes rising sea level, an issue of particular concern in many parts of California and one that may be of more immediate concern.

“Long Beach and San Diego have both experienced local flooding in the last few years due to stormwater overflows during intense precipitation events and both have problem areas in older parts of their stormwater systems that need upgrades,” Jones said. “The local flooding will get worse under expected conditions of more intense precipitation combined with higher sea levels. The mid-December 2010 storm series – when communities in the Los Angeles area received about half their average annual precipitation in one week – exemplifies what extreme pre­cipitation events can mean for South­ern California.”

This issue of Western Water ex­amines water infrastructure – its costs and the quest to augment traditional brick-and-mortar facilities with sleeker, “green” features.