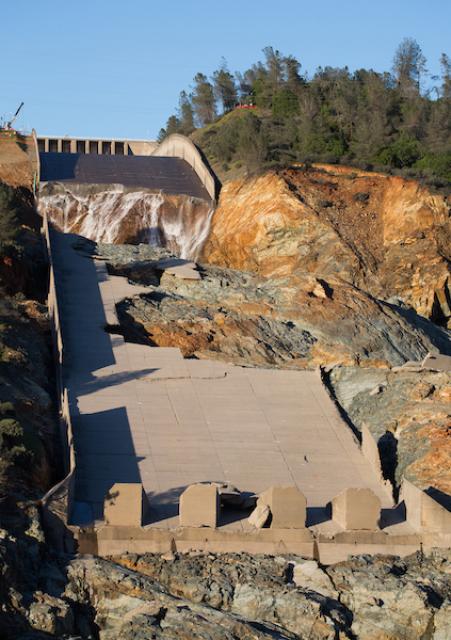 California Natural Resources Agency Secretary John Laird said Tuesday that the February crisis with the broken spillway at Oroville Dam offers an “important opportunity” to assess the safety of the more than 1,400 dams in the state.

“We really want to use the focus on this to look at the issue of dam safety in California,” he said during a hearing of the Senate Natural Resources and Water Committee. “We have the best inspection program of the 50 states but it is clear we can do better.”

In addition to discovering the causes of the spillway failure at Oroville, committee chair Sen. Robert Hertzberg, D-Van Nuys, said the Legislature must be fully informed about the issue in order to take action.

“The deliverable here is what happened before so we are clear about that and then to have a clear reporting path so that all of us in the legislative branch can make a decision,” Hertzberg said.

The committee met for an hour to discuss Oroville Dam, which has been much-publicized after its concrete spillway cratered during a normal release of flood flows. The necessity of closing the spillway for inspection and to prevent further erosion strained the emergency spillway and concerns about its stability Feb. 12 led to the evacuation of more than 180,000 people from the city of Oroville and surrounding environs.

The near-catastrophe was a “no-notice event” that was not anticipated by the Department of Water Resources (DWR), acting Director Bill Croyle said. During a 50-day stretch in January and February, 4.4 million acre-feet of water went through the spillway, equal to the average annual runoff, he said.

Croyle noted that the volume of water did cause the rupture and that DWR is poised to ready the spillway to meet next year’s operational needs.

“The dam is safe, the spillway is impaired, the emergency spillway worked,” he said. “It does need some improvements and we are going to commit to make those improvements.”

Croyle’s assertion was disputed by Assemblyman James Gallagher, R-Yuba City, whose constituents were affected by the evacuation order.

“In my opinion, it didn’t work at all,” he said

Repair work on the spillway and the emergency spillway has been ongoing since the incident began and Croyle said he expects the concrete spillway to be operational by Nov. 1

DWR expects to halt spring releases from the dam by May 2, at which time extensive repair to the lower and upper parts of the spillway will commence. A $275 million construction contract was awarded April 18 to Kiewit Infrastructure West Co. of Omaha, Neb.

Controversy has swirled around the incident because of concerns about DWR’s handling of the spillway and subsequent revelations about the integrity of the infrastructure going into what was an unprecedented wet weather season. Croyle said the rapidly unfolding series of events left little room for lengthy deliberation because of the crucial need to preserve the spillway’s use for releasing spring flows from the lake.

“We had to make a decision with regard to use of the emergency spillway, which was not by design,” Croyle said. “We had to make sure we kept the [concrete] spillway intact and in a condition that we could use throughout the rest of the season.”

Committee members Jim Nielsen, R-Gerber and Jeff Stone, R-Temecula, said it’s important that Oroville’s emergency spillway not be impeded by vegetation that could compromise its integrity. Without committing to specifics, Croyle said one of the positive things to emerge from the incident is the discussion of what an emergency spillway is and how it should be designed and used.