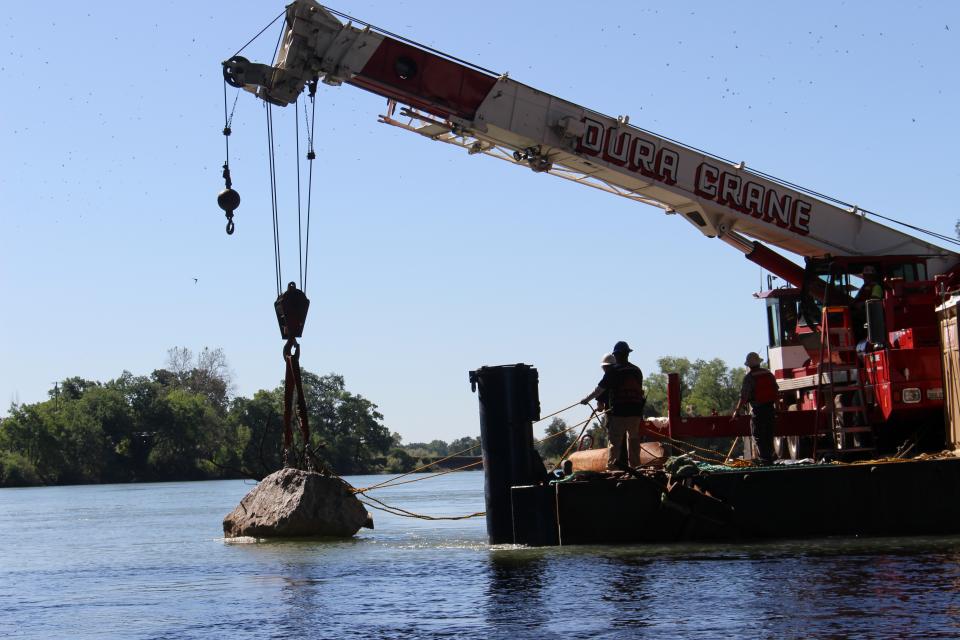 Before dams were built on the upper Sacramento River, flood water regularly carried woody debris that was an important part of the aquatic habitat.

Deprived of this refuge, salmon in the lower parts of the upper Sacramento River have had a difficult time surviving and making it down the river and out to the ocean. Seeing this, a group of people, including water users, decided to lend a hand with an unprecedented pilot project that saw massive walnut tree trunks affixed to 12,000-pound boulders and deposited into the deepest part of the Sacramento River near Redding to provide shelter for young salmon and steelhead migrating downstream.

“It was really borne of a desire to be part of the solution” said Les Canter, co-owner and chief executive officer of the Knights Landing-based River Garden Farms, which produces alfalfa, safflower, wheat, walnuts corn rice and sunflower. “In the last few years, particularly when the drought got severe, it was obvious something had to be done to help these fish.”

The salmon shelters were installed in early May as project proponents pushed to get them in place before the adult salmon migrated up the river to spawn. River Garden Farms donated $400,000 for the project and the Bureau of Reclamation, though the Central Valley Project Improvement Act, contributed $200,000 to install 25 salmon shelters.

“I think that’s really cool they are taking the initiative to spend their own money on fish habitat,” said Curtis Knight, executive director of California Trout, which has worked with River Garden to connect fish with floodplains. “They are willing to try different things and a lot of the motivation comes from this idea that the more fish that are out there, the more reliable their water source is going to be.”

The habitat restoration is part of the Northern California Water Association’s suite of actions designed to help fish populations through its Sacramento Valley Salmon Recovery Program, a document founded on a 2011 report called Insights into the Problems, Progress and Potential Solutions for Sacramento River Basin Native Anadromous Fish Restoration.

There was a sense of urgency to complete the project in time to protect the next generation of fry and juvenile salmon.

“The little fish, if they hold in the upper reaches long enough to fatten up before they begin the 300-mile journey to the ocean, they will at least have a little more strength and stamina to dodge all the obstacles they face,” Canter said

Knight likened the salmon recovery efforts to those that help waterfowl.

“It’s interesting now to see sort a groundswell of land owners and water users starting to think about fish the way they’ve been thinking about ducks for the last 20 years,” he said.