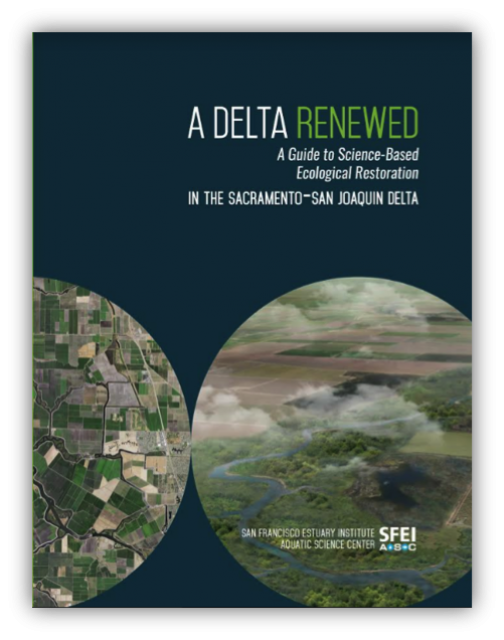 Understanding the importance of the Bay-Delta ecosystem and working to restore it means grasping the scope of what it once was.

That’s the takeaway message of a report released Nov. 14 by the San Francisco Estuary Institute.

The report, “A Delta Renewed,” is the latest in a series sponsored by the California Department of Fish and Wildlife (DFW). Written by several authors, the report says there is “cause for hope” to achieving large-scale Delta restoration in a way that supports people, farms and the environment. SFEI calls itself “one of California’s premier aquatic and ecosystem science institutes.”

Getting there requires a review of the Delta’s ecological processes, most of which have been dramatically altered by the region’s transformation from a vast wetlands area into today’s maze of channels surrounding 60 leveed islands. More than 90 percent of tidal wetlands in the Bay-Delta have been either diked or filled and today’s Delta is an important agricultural region as well as the hub of the state’s biggest surface water delivery projects.

“Understanding the ecological history is important to recovering that habitat, especially in a place like the Delta,” Carl Wilcox, DFW’s policy advisor to the director for the Delta, told the Delta Plan Interagency Implementation Committee  Nov. 14.

The science presented in the report is intended to be “useful and usable,” Leticia Grenier, co-director of the Institute’s Resilient Landscapes Program, told the committee.

The report focuses on how the Delta functioned historically and how those functions can be restored. The ideas are big, long-term and at one time may have appeared to be “pie in the sky,” but they are not new, Grenier said. Delta restoration hinges on fostering habitat for native wildlife, reviving a productive food web and giving wildlife the chance to evolve and for biodiversity to occur.

The diking and canalization of the Delta came at the expanse of the vast thread of “capillaries” that distributed water, sediment and nutrients through the system, Grenier said, adding that the cuts made to facilitate passage resulted in “linear, connected lakes.”

Returning the Delta ecosystem’s viability involves restoring processes such as the tidal influence, part of a systems approach that doesn’t favor one habitat or another. Ultimately, Grenier said, that is what ensures long-term resiliency.

“We think there is a way to make a future Delta that reconciles the environment with the economy,” she said. The report “is not intended to be a piece of science to sit on a shelf. It’s a guide.”

Randy Fiorini, chair of the Delta Plan Interagency Implementation Committee, called the report “a thorough vision for a renewed Delta” and praised the Institute for “pulling together science and presenting in a pictorial fashion what kind of things could be done that balances the needs of the ecosystem with the recognition that the Delta is an evolving place.

“What I got out of the report is that to be effective and supportive of the native fisheries restoration needs to be done on a larger scale that has to be balanced with the current uses of the Delta,” he said. “The report suggests the two are compatible.”