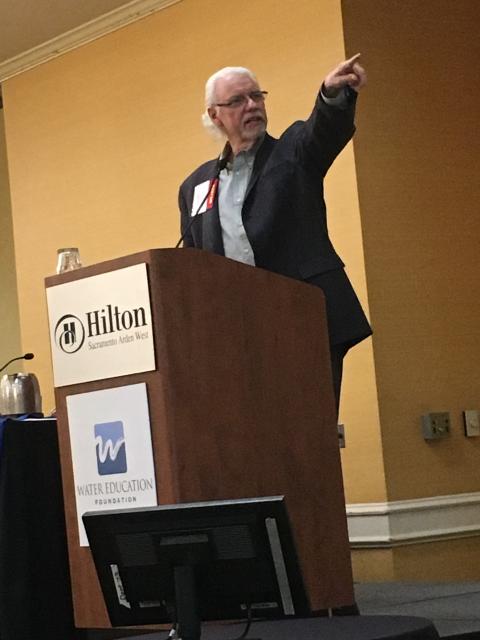 In the wake of a near disaster at Oroville Dam caused by heavy runoff and a damaged spillway, the former chief of flood operations for the U.S. Army Corps of Engineers said it may be time to reconsider how the reservoir is operated to avert such dilemmas

“Less than 20 percent of total storage is allocated to flood control. You can’t solve the flood problem by just lowering the lake elevation because you can’t release any water,” said Joe Countryman, a member of the Central Valley Flood Protection Board, at the Water Education Foundation’s Executive Briefing on March 23 in Sacramento.

Record-setting rainfall pushed Oroville’s capacity to its limit in early February and damaged the dam’s spillway, with Department of Water Resource (DWR) officials precariously deciding in real-time how much water to safely release so as not to overwhelm downstream levees.

Flows well below the conveyance capacity of the concreate flood spillway eroded a hole in it Feb. 7, forcing its closure for damage inspection. Water began emptying for the first time from the emergency spillway Feb. 11 and the threat of its failure prompted a mandatory evacuation for people in the low lying areas of Butte, Yuba and Sutter counties.

Oroville, located on the Feather River just above the town of Oroville 70 miles north of Sacramento,  was built for water supply in 1958 “with only a small amount” of space reserved for flood control, said David Gutierrez, former chief with DWR’s Division of Safety of Dams. While it was state-of-the-art at the time “what we do with it today is different,” and that criteria should be revisited, Gutierrez said at the Foundation’s briefing. Gutierrez recently joined GEI.

In the wake of this year’s record precipitation, the state’s rim reservoirs that sit along the foothills north and south of Sacramento already have recovered significantly from the recent drought and the coming snowmelt will further increase flows into and out of those reservoirs. In the San Joaquin River watershed, snowmelt runoff that is projected to be 250 percent greater than normal will be a problem as the high flows will strain levees that are ill-suited for the task.

“The levees on the San Joaquin system are terrible, not very well put together and subject to failure,” Countryman said. “Pine Flat Dam and Friant Dam will be releasing near-capacity flows for 30 to 45 days and the San Joaquin basin channels are very limited in capacity.”

Most of the expected flooding will occur in the rural areas of the system, he said.