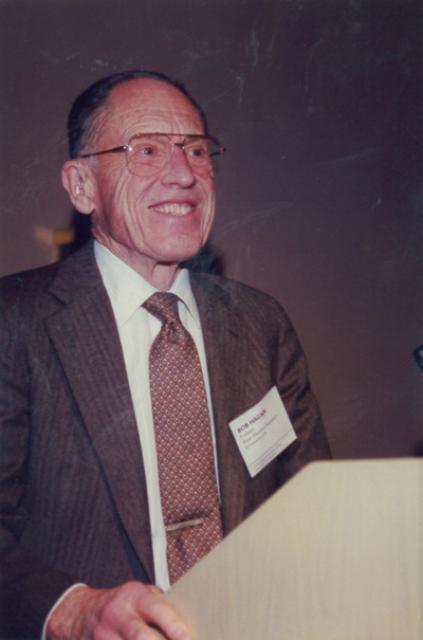 Robert “Bob” M. Hagan, Ph.D. (1917-2002), internationally renowned for his expertise in the relationships between plants, water, soil and water use efficiency — specifically in the area of agricultural water use — was a professor of water science, an irrigationist in the California Agricultural Experiment Station and a statewide extension specialist in the California Agricultural Extension Service during a 50-year career with the University of California, Davis.

He was an award-winning professor and beloved by his students, many who have become leading scientists, farmers and other experts promoting agricultural water efficiency in California and arid countries all over the world. Quoted in a UC Davis article, he said, “I try to encourage my students to think of how they would solve the related problems if they were in a position of authority. I constantly emphasize applications to problems of the real world.”

A tireless student of water issues, he served 24 years on the Water Education Foundation’s Board of Directors and was president from 1989-1994. With Professor Henry Vaux Jr., Ph.D., he co-chaired and was instrumental in the 1991 foundation report titled “Water Inputs in California Food Production.”

His legacy also included personally endowing the Robert M. Hagan Endowed Chair in Water Management and Policy at UC Davis. The current holder of the chair is Thomas Harter, Ph.D., an expert in groundwater hydrology and groundwater issues pertaining to rural and agricultural areas and a Cooperative Extension specialist in the UC Davis Department of Land, Air and Water Resources.