Lake Tahoe: Can We Save It?

“Lake Tahoe’s famously blue waters – which make it the clearest lake of its size in the United States – attract three million visitors to California and Nevada each year. But decades of development, and now climate change, threaten this national treasure.

Continued from yesterday, excerpts from the Water Education Foundation’s September/October 2013 issue of Western Water written by Gary Pitzer are included below:

Author Patrick Betson is a storyteller. … He has handpicked some of his favorite tales and brought them together in a 12-story collection, ‘The Ghost’s of Lake Tahoe: The Stuff of Legends.’ …

“Some of Betson’s characters are fictional and others we recognize: John C.

“South Lake Tahoe City Council adopted an ordinance to ban the use of plastic bags for customer products at retail stores in a 3-2 decision Tuesday. … The ordinance states the city would like residents and visitors to use reusable bags.”

Water Education Foundation’s new Sept./Oct. 2013 issue  of Western Water discusses some of the issues associated with the effort to preserve and restore the clarity of Lake Tahoe. Read more at Western Water

From the KQED Science Blog:

“California Governor Jerry Brown signed legislation over the weekend that reaffirms the state’s commitment to working with Nevada to preserve Lake Tahoe. Nevada had threatened to quit the bi-state agency that has controlled development around the lake for more than 40 years.”

Commentary: Work Together to Save Lake Tahoe

From the San Francisco Chronicle, in a commentary by Tom Mooers:

“Lake Tahoe is no stranger to wild development schemes.

“The latest threat to the Tahoe Sierra centers on Squaw Valley, where developers are proposing a series of high-rise hotels and condos – even an indoor amusement park the likes of which the Sierra has never seen.”

From the San Francisco Chronicle:

“Gov. Jerry Brown on Saturday signed legislation that promises the state will continue to work with neighboring Nevada in managing Lake Tahoe, and formally puts to rest a few years of bickering that had threatened to dismantle the decades-old partnership.”

Commentary: Tahoe Pact is a Win for the Lake, Not Nevada

From the Los Angeles Times, in a commentary by E. Clement Shute Jr.:

“The Times’ characterization in its Sept. 15 article on the agreement between California and Nevada on development at Lake Tahoe as a win for Nevada reflects a misunderstanding of what occurred and what it means for environmental improvement at the lake.”

Read more from the LA Times 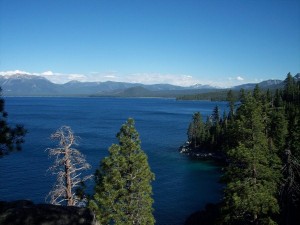 “Lake Tahoe and the Reno area will serve as the backdrop for the movie with the working title ‘Shark Movie.’ It features a carnivorous beast raising havoc in the tranquil waters of the azure alpine lake.”

A Balancing Act Around Lake Tahoe

From the New York Times:

“Protecting this natural wonder, set in a mountain-ringed bowl 6,225 feet atop the Sierra Nevada, would have been difficult enough. But its placement, straddling the California-Nevada border, brings the two states into play, with sometimes-competing visions for the lake’s future. …

“A bill now on the desk of Gov. Jerry Brown of California would renew the compact with Nevada.

“On Wednesday, several crowds of people hiked around Rainbow Trail to see the natural occurrence, though gates to the Taylor Creek Visitor Center remained closed.”

“Nearly all of the 150 people who work for the U.S. Forest Service Lake Tahoe Basin Management Unit were furloughed from work Tuesday and, if the federal government does not come out of its shutdown, will not return today.”

Looking Out for Lake Tahoe: New Accord Stirs Debate

“In 2011, fueled by pro-development and business interests, the state of Nevada passed legislation intended aimed at ending what many saw as a blissful, decades-old union with California — the Tahoe Regional Planning Agency. …

From The Sacramento Bee:

“The agency that provides water for much of Placer County has gone public with what it sees as an ominous federal filing by its longtime partner, Pacific Gas and Electric Co.

“For 45 years, the Placer County Water Agency and PG&E have been attached at the hip.”

Read more from The Sacramento Bee

From The Sacramento Bee, a commentary by Clem Shute, an appointee of Gov.

From the San Francisco Chronicle:

“For the past 45 years, California and Nevada have shared the magnificent Lake Tahoe shoreline under an agreement to preserve the region’s natural treasure.

From the Los Angeles Times:

“Almost as long as California and Nevada have shared Lake Tahoe’s pricey shoreline, the two states have harbored competing visions of how best to prosper from the region’s stunning natural beauty while preserving the lake’s deep-azure color and remarkable clarity. …

“The passage of the California bill was the final step that ended years of hard bargaining over future development in the region.

“Gov. Jerry Brown signed Assembly Bill 165 last Friday, which repealed an existing law that banned the sale or purchase of crawfish taken from Lake Tahoe. … Before anglers can start trolling the California side of the lake, the Department of Fish and Wildlife regulations that govern the commercial take of crayfish must be re-written.