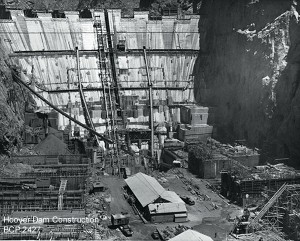 From the Wall Street Journal:

“Seventy-five years ago this summer, President Franklin Roosevelt journeyed west from Washington to place the New Deal’s indelible stamp on an outstanding symbol of governmental might.

The occasion was the official dedication of what is today known as Hoover Dam. As FDR told 10,000 spectators at the Colorado River dam site and 20 million more via radio, the dam meant gainful employment, cheap hydroelectric power, reliable irrigation and protection from the obstinate elements, all ripped from a forbidding desert canyon by the hand of a visionary federal government. Eleanor Roosevelt, who accompanied her husband on his visit to the Colorado River, would tell friends that the trip brought home to her the sweeping achievement of his administration as if for the very first time. That the project had originated with Republicans,indeed, it was originally conceived by her own Uncle Theodore,went unmentioned.

It is customary to think of Roosevelt’s New Deal as the driver of the social and economic changes that gripped America after 1945. But this transformation really began a decade earlier, when the completion of Hoover Dam heralded a period of explosive industrial development and population growth in the West that would reverberate nationwide. The story of America in the last half of the 20th century should be seen as the story not of the postwar era, but the post-dam era.

The dam did more than contribute to the physical and economic remaking of its region; it prefigured and inspired a fundamental change in American values,political, ideological, even psychological. The path from an America of self-contained localities, each one trying address its problems and needs in local isolation, to one in which every state or local issue is seen as a piece of a broad national agenda points us back to Hoover Dam. … ”

Continue reading from the Wall Street Journal by clicking here.

Photo of Hoover Dam under construction courtesy of the Bureau of Reclamation.